The Pamela Colman Smith Commemorative Tarot celebrates the 100th anniversary of the Rider-Waite Tarot deck, and includes a faithful reproduction of the original deck published in 1909, the Smith-Waite Centennial Edition Tarot Deck. The commemorative set includes the deck of 78 cards, postcards, and two books, Waite's Pictorial Key to the Tarot and Kaplan's The Artwork and Times of Pamela Colman Smith. 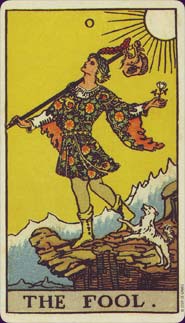 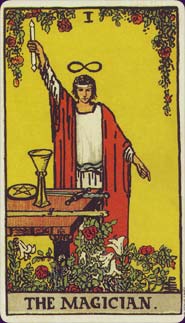 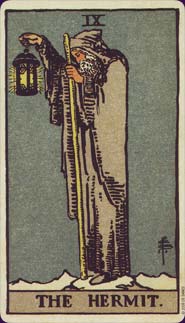 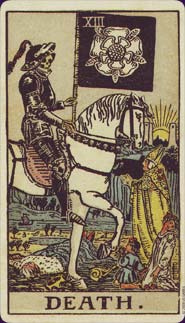 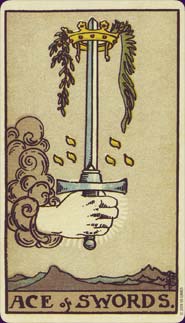 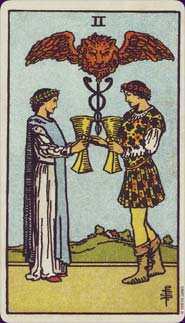 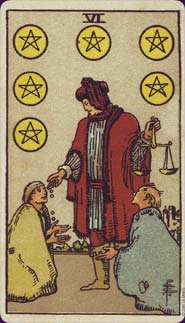 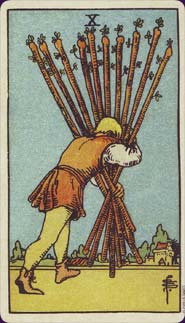 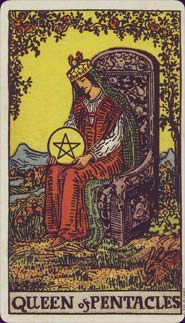 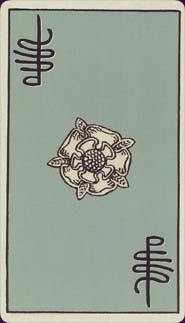 In celebration of the hundredth anniversary of the publication of the Rider-Waite Tarot, US Games have published the Pamela Colman Smith Commemorative Set.

Pamela Colman Smith – Pixie – the artist who drew the now famous tarot images, has been lesser well known than Waite, the member of the Golden Dawn who instructed her to provide illustrations to accompany tarot texts, and Rider, the publishers of the deck. US Games redresses the imbalance, naming the centennial deck after the artist and showcasing her life’s work – which was more than just tarot cards - in a comprehensive biography by Stuart Kaplan.

The Commemorative Set is a rather huge, heavy package that sits well on the bookshelf, sized at 14cm wide, 8cm deep and 19cm tall. It’s heavy for good reason – inside are two books, the 78 cards and assorted extras. It opens like a book, with two inner sections. Both have sturdy inner covers (made of the same thick cardboard as the outer box) that are easily opened with a small ribbon.

On the left, there is the biography by Kaplan, titled “The Artwork and Times of Pamela Colman Smith: Artist of the Rider-Waite Tarot Deck”. It’s a smallish book in size, but has coffee-table type printing with thick glossy pages and plenty of full-colour pictures.

Underneath is a reprinting of A.E. Waite’s dry, seemingly arbitrary and sometimes incomprehensible companion book, “The Pictorial Key to the Tarot”. Then there are six postcards of Pamela’s art; an image of the Empress, portraits, and book illustrations, three 5” by 7” art prints in her trademark artistic style, and a photo of PCS herself, wearing beads and feathers, and appearing to be in animated conversation with the photographer. There’s still more – also included is a laminated spread fold-out, with three spreads printed on it, and an organza bag to hold the cards if they aren’t kept in the box.

On the right of the inner box, snugly tucked into a box insert, is the Smith-Waite Tarot Centennial Edition deck. It is a reprint of the original deck published in 1909. Compared with the most well-known edition of the Rider-Waite, the cards have an aged, almost dirty look, and the colours are much more muted – the bright yellow background of the Magician or Strength has more of a grey tone to it. The images also seem ‘dottier’; the dot screening that creates blended colours is more obvious, particularly on the blues in the World and the Hermit, giving the cards the appearance of an old comic. The cards of the Smith-Waite are a good size at 7cm by 12cm, not too big too shuffle but big enough to see the details. The backs are almost but not quite reversible, in a medium blue-grey with a five-pointed rose in the centre and PCS' distinctive signature in two corners.

Kaplan’s book provides the most original and intriguing content of the set, which is really worth having simply for its information on PCS. Kaplan collected books, art, magazines, letters and ephemera that belonged to her, and has put together an illuminating picture of her life and how she came to create the most recognizable cards in the Western world.

He takes us through Pamela’s life and career in chronological detail, beginning at her birth in 1878, through her early career a children’s book illustrator and set designer, to her involvement in her twenties with Yeats and then Waite in the Order of the Golden Dawn. In 1909, she received the commission from Waite, who wanted PCS to create images to illustrate old tarot manuscripts he had found, and to “follow very carefully the astrological significance of each suit”.

The book shows many of her other illustrations and works, the style is familiar and the parallels between her tarot art and her other illustrations striking. The Four of Swords, for example, shows a man very similar to one in her earlier published periodicals. It’s an interesting journey through the life of a tarot artist whose work is the most well-known in the tarot world, yet whose life, up to now, is obscure to most.

Kaplan says in the biography, “Her writings indicate that, for her, ritual and symbolism derived their power to illuminate from the senses, emotion and the imagination, not from the mind.” Perhaps this is why her images have had such influence in the tarot world, and have brought so much to tarot readings the world over. Ironically, she called the tarot project “a big job for very little cash” – it seems very little has changed for artists in the tarot world since then!

There has been some grumbling in the Tarot community about 'Do we really need another Rider Waite/Waite-Smith deck on the market?' I look at this from another perspective - I am very happy that someone is showcasing Pixie Smith?s work, especially someone that has the wherewithall to do a first class job!

All of this comes in a sturdy box that opens like a book, with the Smith-Waite Centennial Edition Tarot deck (in a blue organza bag with light blue ribbon) on one side, and the books, post cards and pictures on the other side. The Pictorial Key To The Tarot has been redone with stiff cardboard covers, but is text only - no card scans. The post cards showing Pixie Smith's work are truly a gift: done in color, with glossy faces, and including a beautiful take on the Empress.

The heart of this commemorative set, to me, is Stuart Kaplan's book 'The Artwork & Times of Pamela Colman Smith'. I cannot think of anyone better suited to write this book - it is a true gift to the Tarot world. It has given me great joy to wander through this work, looking at a picture here, reading a paragraph or two there. Sitting down to read it straight through was like stepping into another world.

Kaplan has featured an extensive selection of Pamela Colman Smith artwork that lies outside the realm of her Tarot work. It gives us insight into Pixie as a person - who her friends were, who she collaborated with, and what inspired her. In his introduction, Kaplan notes that Pixie Smith was an accomplished designer who worked in the theater with Ellen Terry, as well as a recognized illustrator of children's books (including her own Annancy Stories).

On the down side, her publishing efforts with 'The Green Sheaf' and 'A Broad Sheet' were not financially successful, even though she was praised by critics and reviewers alike, and was exhibited by Alfred Stieglitz in his New York art gallery to rave reviews.

This year, 2009, marks the centennial of the first publication of the Rider-Waite deck. The Pamela Colman Smith Commemorative Set is in recognition of the work of a talented artist who has perhaps not received the credit that she should have.

The book begins with an excellent photo of Pixie Smith, and a short biography. Of interest to me was the backdrop to Smith's own interest in mysticism and the occult, which Kaplan indicates may have come from her mother and her relatives, who were followers of the mystic philosopher Swedenborg.

Every single page of this book was incredible - on one page we see a cover illustration for William Gillette as Sherlock Holmes, on the page facing it we see a full page, hand colored print of Ellen Terry. These are interspersed with wonderful factoids, such as the fact that Pixie Smith studied at Pratt Institute under Arthur Wesley Dow, who exposed her to the concept of 'synaesthesia' - the interplay of the senses - which later influenced her music inspired artwork.

There is a wonderful illustration entitled 'Gingly Fly', a Jamaican tale transcribed by Pixie in her 1905 book ?Chim Chim, Folk Stories From Jamaica'. There is an illustation of 'Peter Pan', from the Craftsman Illustrated Monthly Magazine, 1912, and illustrations from 'The Lair of the White Worm', by Bram Stoker.

Kaplan does an outstandng job of covering the life of Pamela Colman Smith and the people and the influences that surrounded her. Each step of the way he has included illustrations from her work that exemplify that time. Also incldued are interesting tid bits, such as a facsimilie of a letter in Pixie Smith's handwriting to Alfred Stieglitz.

The backs show a small white border, with a thin black inner border. Pixie's initials are in the upper left hand corner and the lower right hand corner, in black. The backgorund is a light blue/grey, with the Rosicrucian Rose from the Death card in the center.

For me, the book on Pamela Colman Smith (Pixie Smith) alone is worth the price of entry. Kaplan has done an outstanding job of pulling together the various aspects of Pamela Colman Smith's life and work, giving the Tarot world a much better understanding of this extremely talented woman. This set is a must have for anyone truly interested in studying Tarot - not just a collectors item, this set is for those that 'walk the walk.

In celebration of the centennial of the Rider-Waite tarot, U.S. Games Systems, Inc. has released a gorgeous boxed set that honors and celebrates Pamela Colman Smith, the visionary artist who brought the deck to life with her talent. For far too long, she has been relegated to relative obscurity because the deck she created was known by the name of the publisher, Rider, and Arthur Edward Waite, who commisioned the deck and authored The Pictorial Key to the Tarot. The new Smith-Waite centennial edition set, which puts her name on the deck and includes a book that showcases her artwork, goes a long way toward giving her the recognition that is very overdue.

Whether or not you are a fan of the Rider-Waite deck, there is no denying that it is one of the most influential tarot decks of all time. The deck revolutionized the tarot by placing a detailed image on every card rather than just on the major arcana. In the past 20 years, literally hundreds of different decks have become available and a majority of them are in some way derived from the Rider-Waite deck. If you compare most decks side by side with the Rider-Waite deck, the similarities will quickly become evident.

As much as I love the deck, it is all of the extras in the boxed set that really make this commemorative edition shine. The set includes Stuart R. Kaplan's book The Artwork and Times of Pamela Colman Smith. This book discusses the work that she did over the course of her lifetime and it contains pictures on almost every page. She created illustrations for many illustrious authors, including Bram Stoker, W. B. Yeats and J. M. Barrie, as well as publishing her own writings and artwork. While many people may only be familiar with her work from the Rider-Waite tarot deck, she created many other works of art over her lifetime and it was really interesting to have a chance to become more familiar with her other creative endeavors.

Arthur Edward Waite's book The Pictorial Key to the Tarot is also included. There is a laminated booklet with three different tarot spreads, a 5-card love spread, a 3-card relationship spread and the woven spread, which is a Celtic cross variation. Rounding out the set, there is a 5" x 7" photo of Pamela Colman Smith, three 5" x 7" reproductions of her artwork and six color postcards featuring her artwork.

Whether you are a tarot collector, a Pamala Colman Smith enthusiast, an art historian or a tarot reader looking for a fabulous new deck, the Smith-Waite commemorative set is sure to please.