The Tarocchi del Respiro is a majors-only art deck from Italy. The artwork is a darkish and surreal collage landscape, the uneven edges of the scene set inside thin white borders. Published in a limited edition of 500 copies.

Reviews of the Tarocchi del Respiro 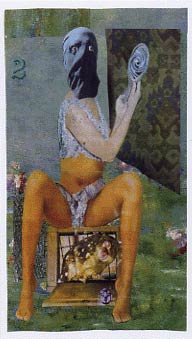 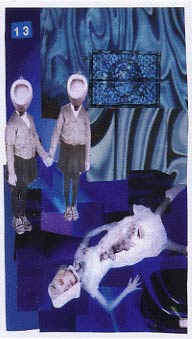 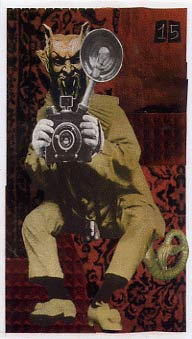 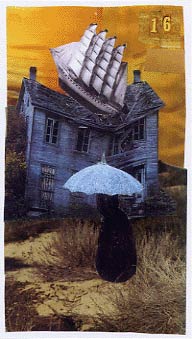 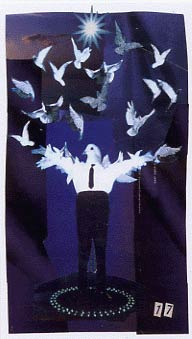 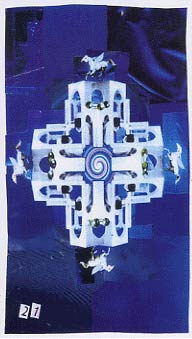 Tarocchi del Respiro translates to “Tarots of Breath” and it's the name of one of many distinct and interesting 22-card Majors decks offered by Museo di Tarocchi (Museum of the Tarots), an Italian museum and organization dedicated to the study and the promotion of Tarot and Tarot research. This deck is the work of Italian painter and e-collagist Giovanni Monti, who is, according to the Museo di Tarocchi website, “... curious of what lie hidden underneath the appearance...”

This deck is part of a signed, limited release of 500. The deck is a digital collage (e-collage) deck, and not particularly attractive (to me), as it retains a physically clipped and pasted look to the cards, and the things combined together on the cards are unusual. For example, several cards have animal heads on human bodies. The color scheme is also a bit dark. The deck backs are reversible, and in contrast, are bright white with a golden rectangle outlined and detailed in brown lines. It makes me think of a building with doors opening outward on all sides. Other decks from the Museo also have this design on their backs. The cards are about the same size as a standard Tarot deck and have square corners. The card stock is a bit stiff as it is a new deck, but it shuffles well and the cards don't stick together.

The theme of this deck is “Breath” so each card of the Majors has a meaning that reflects this theme. Using the cards that are shown here on Aeclectic:


The Fool (Light Breath) is numbered as 0, but is ordered as the last card on the list of meanings and in the deck as received. Justice (Balanced Breath) is numbered 11 and Strength (Powerful Breath) is 8. I was really surprised by this deck as I started to translate the meanings and spend some time with the cards. I really like Death as “Interrupted Breath”, the literal translation of which is this:

“The arcane one without name Interrupted Breath. The instant in which energy transforms him and immediately restarts to live”

The Devil in this deck is portrayed as a photographer alone, pointing a camera outwards towards the reader or observer of the card, drawing them into the card as the “prisoner” depicted in more traditional illustrations. This might be why I found some of the cards more disturbing – I was forced to think about myself as part of the card (or the querent as part of the card if reading for others).

I have always been drawn to cards and decks that break from the traditional archetypes and express the artist's or creator's unique interpretation of meanings. So, it's going to be really interesting to through these cards with these meanings in hand and experiencing Tarot through Giovanni Monti's vision.

The deck comes boxed in a blue cardboard box that opens on one of the large flat sides. One of the sides has the label with the name of the deck. The other has a print of one of the cards, in this deck's case, Justice, pasted to the side that opens. The little white book (LWB) isn't a book at all, but what looks like a half sheet of letter size paper, folded into quarters. I don't mind the inexpensive quality of the packaging or the LWB, knowing that the source of this deck is what I would call a non-profit organization that needs to defray costs as much as possible, and puts the proceeds from the sales into the Museum and the artists' hands in a continuation of its mission.

Despite the small size, the LWB has substance. The artist's signature is on the LWB near the artist's name. There is a brief introduction to the deck and artist, and then the card meanings are provided. Of course, all of this is in Italian, but I found it easy to translate.

Frankly, I didn't buy this deck because I was enamored of its artwork. I bought it because of what it represents – artwork produced through a partnership between Museo di Tarocchi (Museum of the Tarots) and Hermatena, an Italian publishing house. The Museo and its partners are responsible for providing a supportive and incubative environment for artists and others to explore Tarot through research and thought as applied to Tarot's past as well as through the forward thought and infinite possibilities of its future. Without exploration there cannot be discovery.

This is the first deck from the Museum that I have spent some time with. What a pleasant surprise it has been. This deck will probably not appeal to Tarot enthusiasts and readers who embrace the more traditional Tarot archetypes and artwork, but if you want a deck that will challenge you and expand your ideas of what the Majors can mean in a modern context, this is a deck worth getting, studying and using.