Tarot of the Thousand and One Nights 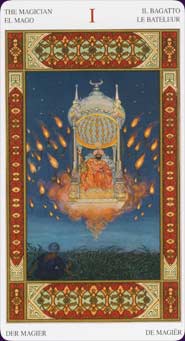 Also known as Tarot of the 1001 Nights

The Tarot of the Thousand and One Nights is inspired by the Arabian folktales reputed to be the work of Scheherazade. The art is finely detailed with thick, ornate borders around each scene.


Card Images from the Tarot of the Thousand and One Nights 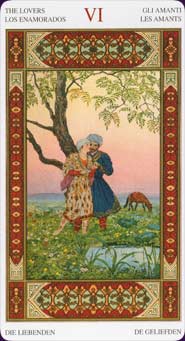 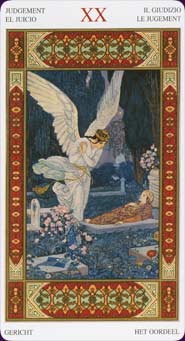 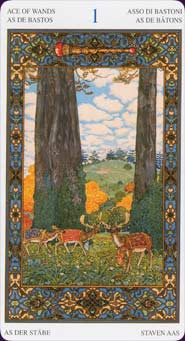 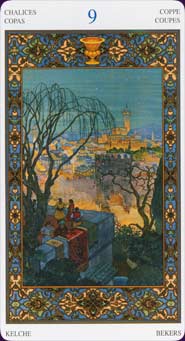 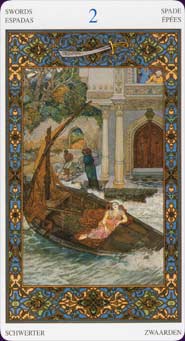 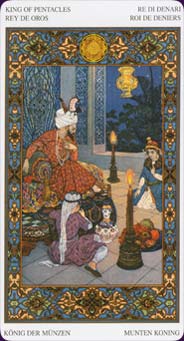 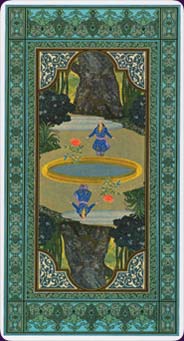 Tarot of the Thousand and One Nights Review by Solandia

"Scheherazade, Aladdin, Sinbad, and Ali Baba are characters of A Thousand and One Nights, where they pursue adventure, magic, poetry, and eroticism."

The Tarot of the 1001 Nights is a window to a magical and sensual Eastern world created from finely detailed, rich, and intricate art by Leon Carre, a new Tarot artist for Lo Scarabeo. His cards depict Tarot scenes through the lens of Arabian life and the East, as imagined when it was most fashionable among aristocratic Europeans of the 18th century.

The theme was inspired by the Tales of the Arabian Nights, the collection of fairytales that originate from the oral tradition of the Near East and are said to have been told by Scheherazade. Tales like the voyages of Sinbad the sailor, Ali Baba and the forty thieves, and Aladdin and his wonderful lamp, which were made available to English readers when translated in the nineteenth century, by Richard Francis Burton.

The major arcana cards of the 1001 Nighs are often mythical and magical, featuring dragons and winged beings, giant snakes and flying thrones. The minor suits of Chalices, Wands, Swords and Pentacles are more mundane – if huge palaces and lushly decorated surroundings can be considered mundane – and show humble inns and fishermen, lush and luxurious household scenes, towns and parks, merchant ships and blacksmiths. All of the cards have very thick, ornate borders; the majors with a red-toned border and the minors with a blue and yellow toned border and the suit element at the top.

Here the traditional Tarot archetypes and scenes have been reinterpreted and ‘broadened’ in meaning. The creators have tried to keep the imagery relatively recognisable without excessively distorting it, but the Tarot link wasn’t always immediately apparent to me. They also allow for use of reversals, with mirrored and thus reversible backs and specific meanings (often more than half) devoted to upside-down cards. Knave, Knight, Queen and King were chosen for the court card titles.

There are a lot of visually appealing cards in the deck through their use of blends of colour, landscapes and composition: the Aces; the Two and Four and Ten of Chalices; the Two of Pentacles; The Lovers and the Sun. Unfortunately I found often the images are so small for the amount of detail contained in the card that it was hard to make out everything all of the scene – larger cards would have been preferable.

The booklet has a typically small amount of information accompanying a deck from Lo Scarabeo. It’s a shame not to be able to find out more about who is depicted on the major arcana cards, which tales were associated with which cards and why, or how the cards were linked with well-known characters or stories. Instead, there’s just a short introduction, brief upright and reversed meanings for each card, and a ‘divining method’ called the garden of Scheherazade. For example:

I think the Tarot of the Thousand and One Nights would really benefit from larger-sized cards without the distracting white borders, and an informative companion book to expand on the card imagery. As such, it is a pretty deck with gorgeous colours and engaging scenes – there is so much to look at in each card, it’s hard to get bored with the cards – but it would be best for the reader already familiar with Tarot imagery.


Tarot of the Thousand and One Nights Review by Dan Pelletier

I can still smell the dust, "Come into my shop…Curios from Cairo, Mysteries from Memphis, Secrets from Seqqara, Oddities of Edfu, we have antiquities from Alexandria, sundries from Aswaan, and mysteries from Marsa Alam... and Baba Ganouch from Giza..."

Each bordered card, contains an arabesque ‘sub-border’ with the art inside. This is a perfect deck if you have magnifying glasses in front of your eyes. I’m not talking detail here, I’m talking about wonderful, wonderful art that has been shrunk down to a point where the content of the card is too small to appreciate.

Further, the cards are busy. There is so very much detail, all shrunk down to a point where you cannot enjoy it.

And what homer wrote the book? They obviously did not look at the deck. Here’s a great example: the Nine of Swords. A dijinn, or some other night-creature carries a sleeping figure either away or towards her bed. The LWB says, “New ideas, intuitions, patience...” Excuse me?

This is a big ‘don’t bother’ in my book. I’m still searching for a good Arabic Tarot.


Tarot of the Thousand and One Nights Review by augursWell

Lo Scarabeo had a chance to do something very different with the Tarot of the Thousand and One Nights (TOTTON) deck but, for reasons I can only guess at, they did not go as far as they could have. That's not to say that this is a bad Tarot deck. On the contrary it is one of the finer decks to come out in 2005 in terms of artistic design. I certainly don't regret buying it.

Unlike many Lo Scarabeo decks the card back for TOTTON is full (multiple) color and has an intricate filigree pattern highly evocative of oriental rugs or Arabic art in general. In the center of the card back is an image from the deck mirrored so that top and bottom of the cards can't be determined from the back. There is Lo Scarabeo's typical Little White Book (LWB) with fairly standard card interpretations and the usual introduction in multiple languages. The box the deck comes in is beautifully done in terms of artwork with the nice, functional box design that is typical of the Lo Scarabeo boxes. This is one box that is beautiful enough so that replacing it with a deck bag or other box seems unnecessary.

For the card faces there are the usual six language titles on every card, top and bottom with a white outer border. The Major Arcana have a different border frame pattern and color than the Minor Arcana and both are again evocative of oriental rugs or Arabic design. Each card has a full color illustration in the center of the border pattern. The suits of the Minor Arcana have symbols in the top part of the border of the card which are also styled to evoke the time period and spirit of the deck. For example, the symbol for the Swords is a type of square tipped scimitar which, for me, evoked a sense of the Mamluk cards which may have influenced the early development of the Tarot.

Unlike many Tarot decks this deck shows equal effort by the Artist for the illustrations on all cards, regardless if they are Major or Minor Arcana. The artwork is highly detailed and full of every conceivable color blended to make beautiful story-like scenes. The artwork by Leon Carre rivals any illustration art from classic storybook illustrators such as Howard Pyle or Wyeth. Every card is a gem of illustration art and has the sense of a tapestry.

I was, however, disappointed by this deck in a few ways which leads me to the lost chance for Lo Scarabeo that I mentioned at the outset. First of all the cards are too small for such highly detailed and beautiful pictures. Such illustrations deserve a larger canvas. Likely this is simply due to the fact that all Lo Scarabeo decks are the same size for production reasons. Secondly, the LWB says nothing about the Tales of the Thousand and One Nights other than the background and introductory information that is informative but typical of Lo Scarabeo LWB's. There is no information about each card illustration and which Tale it was derived from, if any. Looking at the artwork it seems impossible that the artist did not have specific scenes and stories in mind for each illustration. Since this deck is particularly useful for Tarot readings and Spreads that are "story-telling" in nature or for Tarot Readers who use a story telling style, this is a frustrating lack of background information. I also felt it would have been nice if each of the suits of the Minor Arcana had a different colored border instead of simply varying the suit symbol. As it stands a Cup has the same border as a Sword even though the suit symbol itself changes.

Here is what would have been nice for this deck and I can only hope that someone from Lo Scarabeo comes across this review and takes it to heart. First of all, make this a large format deck. Many decks are coming out now with 3.5" by 5.5" cards and larger. The artwork on these cards would benefit from a larger card size. Secondly, do a full color illustrated companion book for the deck with full references and notes from the Artist and anyone else who worked on the deck that fully explains the source of each image on the cards. Also fully explain the scene and what is going on in terms of the Thousand and One Nights stories. This would be a wonderful way for Tarot readers to tap into the stories from the tradition of the Thousand and One Nights and link them into Tarot card readings. If the size of the cards can't be increased then include full page, full color copies of every card in the large format companion book. Finally, I understand the need for multiple languages on the cards but make the borders "full-bleed" so that there is no white edge to the card faces and consider varying the colors of the Minor Arcana suit borders.

I realize that the deck is the way it is and such recommendations as above fly in the face of reality but it is hard not to dream with a deck of this kind. To put it simply, this was Lo Scarbeo's chance to make a very beautiful and useful large format boxed set of Tarot cards. Perhaps, and hopefully, they will reconsider doing that and come out with one. I for one would buy such a set or companion book.


Complete Details of Tarot of the Thousand and One Nights


Similar Decks to Tarot of the Thousand and One Nights

Home > Decks > Tarot of the Thousand and One Nights