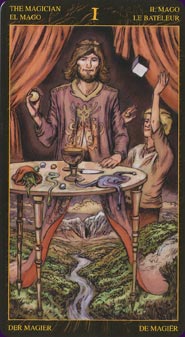 2012: Tarot of Ascension has been designed as a tool for spiritual growth and evolution. It has images set in an imaginary medieval setting, with concealed new age symbols and secrets. The minors have been altered to better reflect the seeker's upward path, with some traditionally negative cards becoming more positive.


Card Images from the 2012: Tarot of Ascension 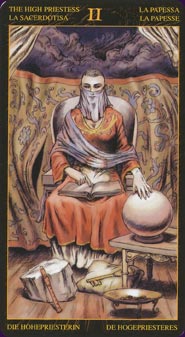 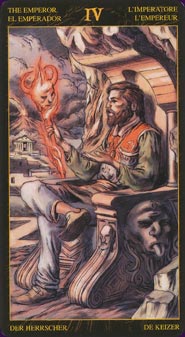 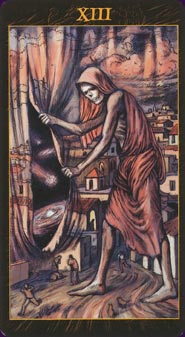 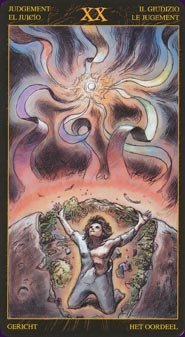 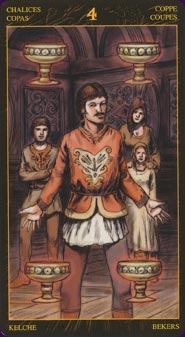 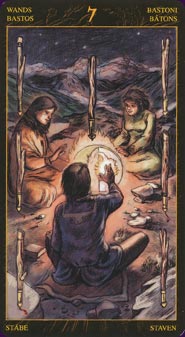 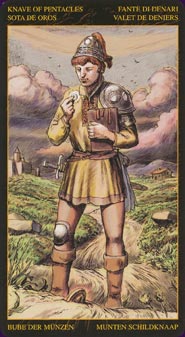 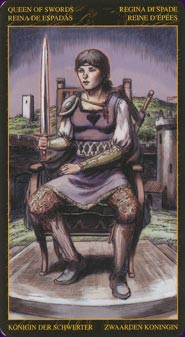 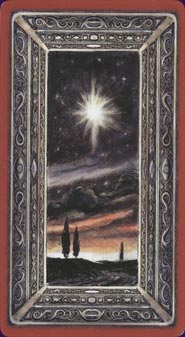 2012: Tarot of Ascension Review by Lillie

It has long been one of the beliefs of the new age movement that the year 2012 will bring great changes, be they an apocalyptic end to the physical world or a global shift toward a higher conciousness. 2012: Tarot of Ascension by Lo Scarabeo takes this date and these beliefs as a symbol for the individuals spiritual growth and is created as a tool to aid the querent on the path toward their own ascension into the transcendent world beyond this one.

Structurally 2012 is designed as a normal tarot deck, 22 trumps bear the usual names apart from XIII which remains unnumbered. Justice is VIII and Strength XI, the minors are divided into the usual suits and the courts carry the expected names. The faces of the cards have numbers and multi lingual titles in gold against a slim chocolate coloured border while the backs bear a non reversible picture of a star above a landscape, symbolic of the ascension to the stars. Fully illustrated throughout the art of Michele Penco keeps the new age trappings to a minimum and instead places the images in an imaginary medieval setting. A world where the subtle, muted tones and oddly disturbing pictures harmonise with the elegant dark borders.

At first glance the Major Arcana appears to conform for the greater part to the traditional pattern and the medieval setting makes this deck somewhat reminiscent of some of the more ancient decks. Yet it is soon discovered that the detailed and elaborate drawings conceal many hidden symbols and secrets for the reader to decode; symbols that reveal and illuminate this decks new age origins. The first and most obvious of these are on the Sun and Moon cards where in both cases twin luminaries light the sky above the more familiar scene below. No explanation is given for this phenomenon, only the accompanying booklet, written by Pierluca Zizzi the creator of the deck, references, for the sun card, 'Look for the longest day, the one with two suns and no sunset.' It would appear that this is a reference to the apocalyptic predictions that the planet Nibiru will enter our solar system in 2021, appearing firstly as a second moon in the night sky and later as a second sun in the day time. The two suns could also refer to the ending of the ancient Mayan Long Count Calendar, where the fifth sun, the sun of our age will be replaced by the sixth sun, the sun of the new age.

Some of the new age symbolism that appears upon these cards is easy to decode such as the glowing balls of light that appear on most of the majors. These appear in many places including the Fool's bag and at the apex of the Wheel. However they are most often found upon the bodies of the people pictured in the cards in places that seem to correspond to the Chakras. It would seem therefore that these balls of light are symbolic of the spiritual energy or life force within an individual striving upward toward transcendence. This supposition would seem to be most positively confirmed on the Lovers card where the lights at the crowns of the figures heads lead upward toward a single great light, indicating the spiritual evolution of the individual toward the transcendent divine light of the cosmos.

Other notable and striking cards in this deck cards would include Strength featuring the monstrous, human faced beast that replaces the most usual lion. A dramatic and perfect illustration of an individuals control over their lower nature and baser instincts. XIII, unnamed in this deck, appears particularly inspired. On this card the familiar skeleton draws back the veil of the mundane, every day world to show the infinite reaches of the galaxies beyond. Judgement too warrants a mention with its innovative depiction of rebirth. In this card the figure, and indeed the world itself, breaks out of the confining clay of the material world allowing its life force to stream upward to the great star that symbolises the goal of our spiritual evolution, the new world that awaits after the events of 2012.

Most of the other major cards conform well enough to the expected pattern to be recognisable and readable to anyone familiar with tarot. However most, if not all, of these cards present not only a pleasing familiarity but at the same time introduce notes that jar against the readers expectations. Examples of these would include things as minor as the shaven head of the Priestess and as major as the nudity of the Hierophant. These curious features seem at first to strike discordant notes in a familiar harmony, yet once the first shock has subsided it is discovered that they make the reader stop, look twice, think and consider what they see. In this way the reader finds themselves truly contemplating the cards. Instead of simply glancing over them and seeing what is expected they find themselves examining the cards in greater detail, searching for patterns and for meanings that will make sense of the strange and sometimes bizarre details of the images.

The four suits of minors bear the familiar names of Chalices, Pentacles, Wands and Swords, each numbered from Ace to Ten. Each one features a full illustration with a geometric arrangement of the correct number of suit symbols superimposed over it. This makes identification of the cards both quick and easy, despite there being no apparent elemental symbolism to differentiate the suits and the same muted colour palette being used throughout. To some degree the illustrations upon these cards conform to the sense (though not necessarily the image) of the familiar Rider Waite pattern. The Ten of Pentacles features a group of figures at a walled gateway; the Six of Swords shows the ubiquitous boat and the Seven of Cups features the inevitable dream sequence. However on other cards there are many and varied differences between this deck and the RWS and in some cards it is difficult to make a connection between what is expected and what is perceived. An example of this would be the Five of Pentacles where instead of an image analogous to the crippled beggars stumbling through the snow we see a group of healthy men and women contemplating an easy journey beneath glorious sunshine.

The reason for these similarities and differences appears to be explained by the nature of the deck. Taking both its name and theme from the perceived need for spiritual evolution, 2012: Tarot of Ascension sees itself as a tool to aid the seeker upon their path. The minors therefore all seem to be configured with that in mind, the lesson in all these cards is the way forward and up rather than backwards and down. This necessitates a re-visioning of the more negative cards in the RWS iconography so that they illustrate the more positive aspect of the meaning. The grim reality of the beggars on the RWS Five of Pentacles becomes instead a positive vision of the future that can be created and made manifest by the correct spiritual steps upon the path of evolution.

The Court cards again take the expected format, Knave, Knight, Queen and King, each holding the symbol of their suit, although again some of the characterisations are not what may be expected. Most startling is the Queen of Pentacles, usually imaged as luxury loving and materialistic. Here she is plainly dressed, seated in what appears to be the mouth of a cave, a book laid beside her. Her left hand holds a glowing pentacle up for her inspection whilst her right hand, clasped upon her lap, appears also to hold something that glows with its own special light as though there, away from the light and the luxury, she contemplates the value of what she has and finds, perhaps, something more precious than gold.

The booklet that accompanies this deck focuses upon the need for spiritual transformation as 2012 approaches and although necessarily brief is invaluable in decoding the intended meanings of the cards. It features key words as well as meanings for the Majors and includes a 7 card spread designed for use with this deck and intended to aid the seeker in their spiritual evolution toward transcendence. However it would also be more than possible for these cards to be read intuitively without reference to the booklet as the wealth of unusual symbolism and the detailed art work seem designed to trigger the intuitive leaps of this reading style.

In essence this deck is a curious mixture of the strange and familiar that appears to hark back to the past while looking toward the future. This odd juxtaposition of ideas is both enthralling and disturbing, making the reader step out from their comfort zone and truly look at the cards they are reading. It must also be said that despite its name a belief in, or the knowledge of, the predictions surrounding the year 2012 is not really necessary for the successful use of this deck. Its message of spiritual evolution transcends a single year or specific set of predictions. Indeed, the need to evolve and change in the face of certain death is a part of the human condition and, in that sense, this deck is relevant to all.


Complete Details of 2012: Tarot of Ascension


Similar Decks to 2012: Tarot of Ascension