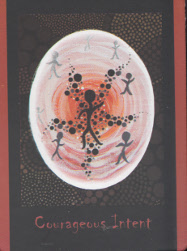 The Aboriginal Goddess Chakra Cards were inspired by the connection between the author's Australian aboriginal spirituality, the chakras, and deities from other cultures. It has 49 cards with similarly blended illustrations. 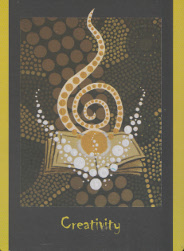 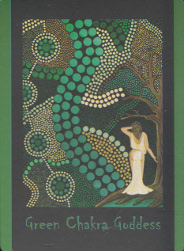 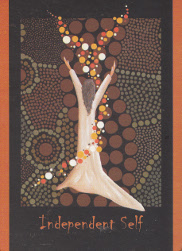 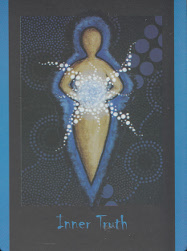 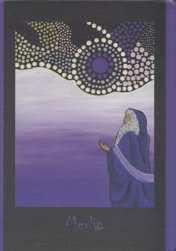 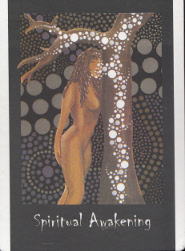 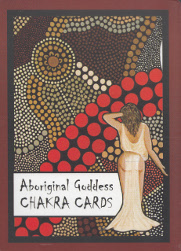 The “Aboriginal Goddess Chakra Cards” are a set of 49 cards that are based on a mix of Australian Aboriginal spirituality and universal spirituality. Brown has drawn from her own Aboriginal spirituality, and blended this with deities from a range of other cultures, overlaid with the teachings of the seven chakras. Each chakra is associated with a specific color, Chakra Angel or Faery, and a God and Goddess. Four chakra cards are also included in the deck.

The cards come in a beautiful soft leather pouch, and are accompanied by an instructional handbook (the cover of the handbook carries the image of the figure on the Green Chakra Goddess card, the same image that is on the card backs). The card size is approximately 3 1/8” by 4 Ľ”, the backs are not reversible. The

card fronts show a colored border on the right and left hand sides, coded to the chakra they represent. The background to the cards is black, with the card name across the bottom of the card, in the color of the chakra that it is associated with. The art style makes good use of color, shows beautiful movement, and extensive use of a circle/beaded effect. The cards are a pleasure to work with! The only thing that I found difficult was trying to read the purple text for the Brow Chakra cards against the black background.

The Hand Book shows a black and white scan for each card, along with an explanation of the card. The seven chakras and their associated colors are the Crown Chakra (White), the Brow (Third Eye) Chakra (Purple), the Throat Chakra (Blue), the Heart Chakra (Green), the Solar Plexus Chakra (Yellow), the Sacral Chakra (Orange), and the Root Chakra (Red).

“Spiritual Awakening” is from the Crown Chakra cards. Here a female figure faces a tree lined with white bubbles. Sounds silly, but the effect is magical! Indeed, it represents that “Aha!” moment in life, when everything falls together! You are being given revelations about yourself that will take time to understand.

“Merlin” is a Brow Chakra card. (I do so love Merlin!) Merlin has the ability to understand physics, and the wisdom to combine this with the practice of magic to create a world of wonder and possibility. Don’t be afraid to take responsibility in your life.

“Inner Truth” is a Throat Chakra card. It represents your ability to understand yourself on a deep, instinctual level. It is your ability to accept that which you really do not understand. Sometimes we have to say no, so that others will have the experiences that they need to have.

“The Green Chakra Goddess” is a Heart Chakra card. She teaches us balance, love, and self-control. She maintains a very close connection with nature.

“Creativity” is a Solar Plexus card. It is the passion of the spirit. We become individuals through our ability to express ourselves through our creativity. Accept the challenges in your time. This card also indicates a time of prosperity, financially and emotionally.

“Independent Self” is a Sacral Chakra card. Independence and ego – separate things! We need to share our experiences with each other, in order to get the most out of this lifetime. Spend quality time with the people in your life.

“Courageous Intent” is a root chakra card. This is the ability to dig deep and listen to our own inner wisdom. Trust that wisdom, and act on it.

Other deities that you will encounter in these cards include Cerridwen, Buddha, Lady of the Lake, Maat, Horus, Aphrodite, Eros, Pele, Thor, Rhiannon, Baldr, Freya, and Pan.

I found these cards to be well thought out, and well presented. A very good tool of empowerment!