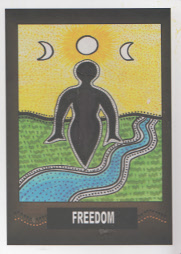 The Aboriginal Spirit Oracle is a 40 card inspirational deck, illustrated and channeled by Mel Brown, a Ngunnawal Aboriginal woman and clairvoyant. It combines aspects of feminine goddess energy with Aboriginal spirituality. 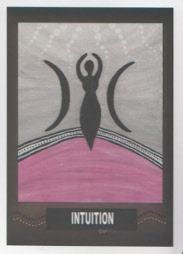 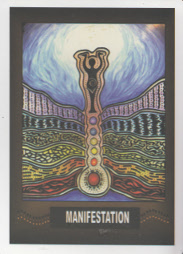 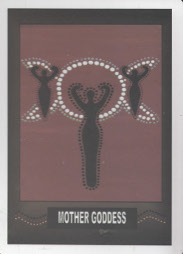 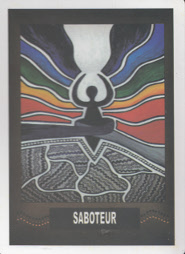 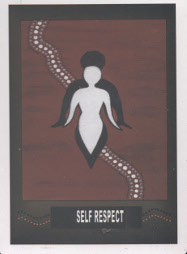 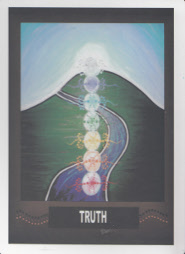 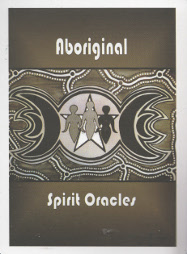 “The Aboriginal Spirit Oracle Cards” is a 40 card inspirational deck, illustrated and channeled by Mel Brown, a Ngunnawal Aboriginal Woman and clairvoyant. The messages held within the cards are meant to act as a tool to guide us through life, and to assist in clarifying any issues that we are facing.

The Aboriginal Spirit Oracle Cards are similar to a Tarot deck. Some cards are wonderful and offer messages of praise and positive affirmations, whereas some cards have stern messages that challenge the Reader to look at their own behaviors or that of others to address the issues at hand.

Brown has combined aspects of the Feminine Goddess energy with Aboriginal spirituality. The artwork is unique and very sharp – no unnecessary objects to clutter the cards, primitive type artwork, colors that stay to themselves, and symbols that are, easily recognizable, such as the chakra system, the three female aspects of the Goddess (maiden, mother, crone),and the moons on either side of the goddess figures representing dreamtime and the feminine mysteries. The cards have a unique appeal that goes beyond cultural boundaries – they will appeal to Aboriginal and non-Aboriginal people alike.

The cards, and the accompanying guidebook, come in a 5 Ľ” by 4” wooden box, with the top drawing out to open. Care needs to be taken in taking the top off, and putting it back on. The box itself is a light colored, lightweight wood, and is beautiful! I had a small problem getting the cards out of the box, but that is because they were wrapped in plastic. Once I got them out, and took the plastic off, they fit nicely. The top of the box, the cover of the guidebook, and the back of the cards all carry the same logo – a circle with three female figures, arms stretched over their heads, with two quarter moons on either side. Above this is the word “Aboriginal”, below it are the words “Spirit Oracles”.

The cards are 3 Ľ” by 4 3/8”, of very sturdy card stock. The card face shows a Ľ” white border, followed by a Ľ” black border. At the bottom of the card we see the card name, in white lettering against a black background. The imagery in the cards is primitive, and makes good use of color, with minimal objects, presenting a very clean, uncluttered look to the cards.

The guidebook is text only (no images), and gives a definition of the name of the card, along with an explanation of how to put the energy of the card to use. My quibble with the guidebook is that this ia all that is presented – no explanation is given on how one might use the cards. For someone who is used to working with Tarot and divination decks, this won’t be an issue. For someone new to working with oracle cards of any type, this could be a problem.

I love the card entitled “Truth” – it shows a blue sky, green land moving into a hill in the background, with a blue road wandering through the card and up behind the hill. In the middle of the card are seven circles, radiating energy, representing the seven major chakras.

Truth is not just simply ones own understanding of how things are, for truth is deeper than that. It is an unspoken knowing that comes from deep within. It is the soul acknowledging the truth in its purest form. Truth can often be clouded by others interpretation of life, yet your soul has a remarkable way of distinguishing what is real and what is not. If you don’t trust your intuition, your gut will show you the truth. Spend time listening and taking note of your body, as all the answers you are looking for are there within you – just look inside and listen.

Explanation of the Card

What is truth, anyway? It’s what feels right for you! Everyone’s truth is different. Don’t get too tied up in who said what, to whom, and when. It is like when a number of people all witness the exact same tikng, yet when they are asked what happened, accounts of the event will change from one person to the next depending on how they viewed the situation. Don’t doubt yourself because others see things differently, but don’t judge them either. Let someone else have their tttruth, and understand whilst it may be different, your truth is not wrong either, as you are just both coming from different perspectives. This is a time to trust your own truthand delve into your own inner self for the answers without the pressure from others to see it their way.

Amongst the other cards we have “Intuition”, which shows a single female figure, arms raised above her, with a single quarter moon on either side. The definition is that of a “state of awareness that comes from knowing and trusting in yourself. The explanation goes on to talk about how the Seeker has chosen to ignore signs in the past.

Reflection shows a female figure, standing, with her arms raised, palms up, at shoulder height. Below that we see a series of lines connecting circles. The definition talks about the ability to look back and see a situation for what it was. The explanation talks about the Seeker being sad because of the losses they have sustained.

Wealth shows a tree with green leaves, and wisdom coming down from the sky in the form of lines of white droplets. The definition for this card is one that includes money, possessions, and experience. The explanation talks about wealth being an individual thing, depending on where each person put their focus.

Mother Goddess shows a female figure in the foreground, with her arms raised. White circles are around the upper part of her body. Two smaller female figures stand behind herm outlined in the white circles. The definition for this card talks about her being known by many names, but standing above all. The explanation talks about the Seeker’s ability to see the universal picture.

Saboteur shows a female figure, seated, with her arms above her head, appearing to hold a white cup that is resting on her head. The colors of the seven chakra’s flow in ribbons around her. The definition talks about looking for that dark an ominous being in that long dark trench coat. The explanation talks about stop blaming others, stop feeling sorry for yourself, stop waiting for the next bad thing to happen. Manifestation shows a tunnel, with its roots in the earth and a female figure, arms raised above her head, at the top. The definition for this card talks about principles that have been practiced for thousands of years. The explanation talks about having the power to manifest your future.

Freedom shows a female figure, arms down at her sides. The land that she is super-imposed over is green, with a blue stream running through it. The sky is yellow, with a full moon over the figure’s head, and quarter moon’s at each side. The definition talks about feeling content within yourself. The explanation talks about the end being in sight after you have worked very, very hard.

Inner Harmony shows ribbons with the colors of the seven major chakra’s. In the center we see hearts winding their way up the spine, where the chakra’s are located. The definition for this card is being true to ourselves and walking out own path. The explanation is being emotionally available.

I found these cards to be easy to work with, the illustrations magical, and the guidebook well written. The only other thing that I would have like to have seen was an explanation on how to use the cards, for those Seeker’s that have never used a system like this before.