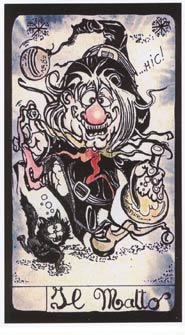 The Abracadabra: Le Streghe Giocano a Carte is a deck illustrated with witchy gnomes at play - gnomes with red noses and apparent alcoholic tendencies. It's a comical deck of 22 cards from Italian publishers, Hermatena.


Card Images from the Abracadabra Tarot 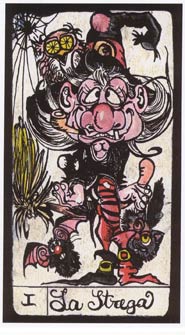 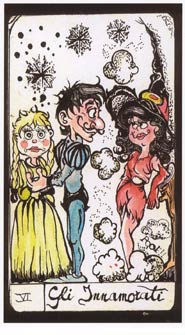 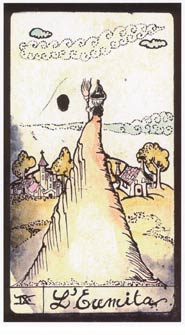 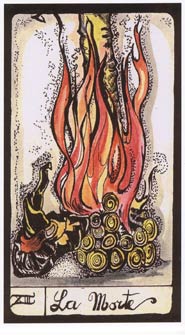 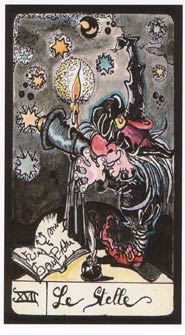 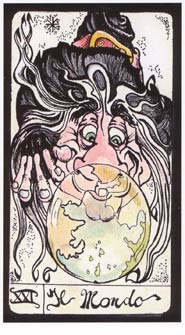 Two years ago I received my copy of the Streghe deck, and promptly showed it to a young Italian girl I was seeing at the time. I had told her it was called the "Streghe" (and she corrected my pronunciation, now I can say it like a native!), but she was horrified that anyone would call a Tarot deck that. She explained the constellation of rather unflattering meanings that the word had. On finally seeing it, her whole demeanour changed. She loved it - and she loved the name for it.

Amongst other things "Streghe", apparently, means Witch. It means nagging wife. It means bitch. It means slut. It means old harridan. It means female thief. Most of the insults you can throw at a woman can be translated by this one word, apparently.

But what it mostly means, is a healthy sense of humour and a total lack of hygiene, based on my impressions of this deck!

The cards are a decent size whilst still being shuffleable, and have an inner black border surrounded by a white border, both of them narrow. They are on unlaminated cardstock, so I have been careful in my handling of them. The box is a simple fold-up cardboard box, also unlaminated and made of a loose, large-fibre, absorbent card, so over the two years I've had it, despite my gentle handling of it, the box has seriously started disintegrating. The frontispiece is a duplicate of The Fool - Il Matto - glued to the box, so anyone not in the know would assume the deck was called Il Matto.

How to describe the style of the deck? Well, it's in colour, although it's in the style of a black-and-shite deck, with features or creatures picked out in colour to add emphasis. For instance, as I write this I am looking at Strength - La Forza", which shows a witch whopping a dragon with her broom. The witch's huge nose is pink. The dragon and broom were done as black and white sketches, then filled in with green and yellow respectively. Everything else in the card is black and white.

Even at a most cursory glance, we will all notice that all the figures and objects in all the cards are surrounded by clouds of little black dots. These represent dirt. They may even represent vermin, like fleas or flies. And every single card is riddled with them.

The "story" of this deck is of a fat, middle-aged cartoon-witch, wandering through life, not necessarily with her age progressing in the same way that the cards are numbered. For instance, we see her approaching her death and dying in Il Carro and La Morte, but bouncing and vibrantly alive elsewhere in the deck, old and young.

This is one of those light-hearted decks you go to when you want a giggle. But as I've discovered anew in the last week, it'll give a surprisingly serious and deep reading if that is what the client needs.