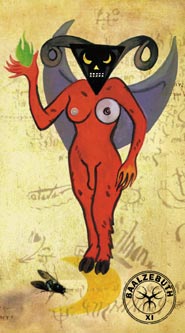 The Abysmal Tarot is a new alternative, art tarot with a satanic theme. It is a quality set with 22 cards by ten different artists, each featuring a Devil or demonic aspect. Published in a limited edition of 333 copies, with 22 of these decks having an extra card called Abigor.


Card Images from the Abysmal Tarot 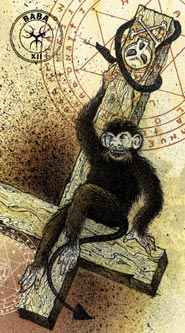 The Abysmal Tarot, or Tarot de L’Abime, is the first deck from alternative French Tarot publishers, Collection Palestrina. Based on the theme of the Prince of Darkness in his many guises and facets, it has 22 cards of demonic and Devilish figures in a ‘gallery of portraits of the manifold Satan’.

The twenty-two cards are:


The deck is very non-traditional in a tarot sense, dispensing almost entirely with standard symbolism and is almost a deck of 22 Devil cards. A collaborative deck with contributions from ten different artist’s imaginations, on the whole there is still a cohesion to the art as well as theme. As expected, many of the illustrations of the deck are dark and serious with nightmarish figures and disturbing creatures. More unexpectedly, there is also an element of seduction and attraction to the demonic deities. There are surrealist art paintings, collages, medieval-looking Tarot-like devils in Caacrinolas, a hairy, forked-tail monkey in Baba (XII). The card with the most impact is perhaps the untitled XIII, a pool of blood lying before a dark shadow with a goat-like face, and several – too many – horns. Lilith (III) is golden and conventionally pretty, unlike Bifrons (V), a highly disturbing creature of nightmarish features.

These are large-size cards as befitting an art deck, at 10cm by 18cm. There are the 22 major arcana cards (plus a twenty-third card in 22 special decks that are numbered from 666 to 645, for Abigor, the ‘Great Duke of Hell’, who presides over the teachings of the future, lust and the art of war). There is also a title card that lists the author attributions and their cards and has a silver satanic handprint as though placed on the surface, which also has a different and more contrasting back to the rest of the deck. (A nice touch – it’s less easy to accidentally pull the title card in a reading). This back is the Devil card from a Matisse-style deck-in-progress, while the rest of the backs are in tan and cream shades and blends, with reversible circular and pentacle designs.

The set is gorgeously produced and a joy to handle. The packaging is matte stock, the cards are large enough to see the art in details, have rounded corners and are on thickish stock for their size. The deck of cards comes in a matte slip case of a darkish red with the maker’s information printed on the back, then inside is a separate case in the same paper that folds out like a brochure. The first face has the title in English and French, and the inner page has a quote by Victor Hugo and info on the deck’s concept (in English and French, this is the only companion information for the deck). Inside still further are two flaps that hold the cards in place, and finally the cards themselves.

The Abysmal Tarot has been published in a limited edition of only 333 copies by new Paris-based Tarot publisher, Palestrina. Palestrina are a new publisher, with the aim of publishing ‘new (even disturbing) different concepts... a different outlook... a personal or surprising artistic project’. They will be releasing majors-only art decks only, up to three sets a year, and aim to offer excellent limited edition sets that are both professional and creative. But nothing old, stale, with flowers, or faeries or cats – these are intended to be complex and original decks.

The Abysmal Tarot taps into the shadow side, into darker archetypes and older deities, and its cards are powerful, sexual, seductive, nightmarish and disturbing. While very non-traditional and not to everyone’s taste, it’s also a collector’s item for its unusual theme and quality production.

I could just write a mundane review, “This is a lovely art deck” and leave it at that. However it’d be substandard. The Abysmal Tarot is so much more; and failure to touch upon what the deck really is, and what it can really be, would be a serious disservice, to the deck, the artists and publisher, and the Tarot Community.

First, the basics. The Abysmal Tarot is a 22-card, Majors Only deck containing artwork by ten different artists, so that each card carries a different stylistic feel. The cards do not contain standard or expected imagery. They more closely resemble twenty-two portraits…of demons. The cards are large, measuring 18cm x 10 cm.

These cards are perfectly suited for the Adverse, or Qlipothic Tree, in that the figures depicted refer to the reflection or opposite aspects of standard Tarot archetypes. The demons could easily be referred to as "evil twins” of the archetypes. These can work as the artist’s interpretations of the twenty-two demons that correspond to the 22 letters of the Hebrew alphabet.

The Zohar describes the qliphoth as the result of separation necessary in the act of creation. Between two things, there must be a gap or barrier, and that is a qliphah.

This deck is a must have for any who work with dark magic, or shadow pathwork. I applaud the publisher for producing a deck that lies outside the norm of accepted Tarot, and producing a deck of dark and stunning beauty.