The African American Tarot is a strong and vibrantly coloured deck of scenes and imagery of African and Afro-American culture, animals and art. According to the booklet, each card is linked with an important deity, character or location in African-American history. 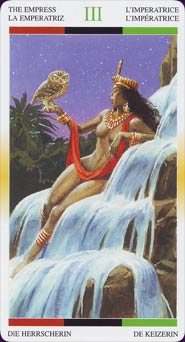 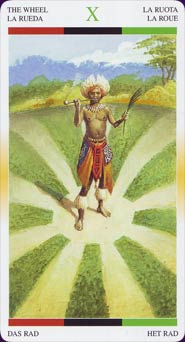 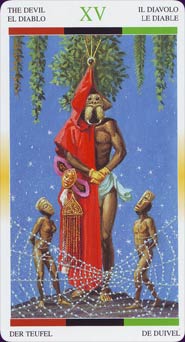 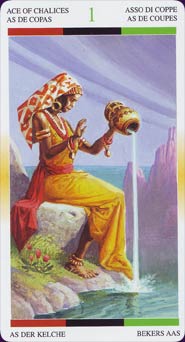 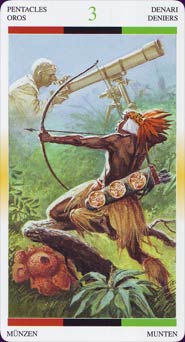 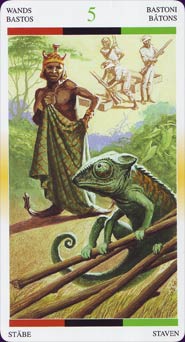 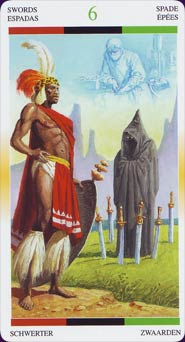 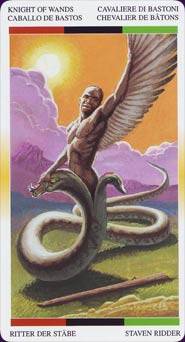 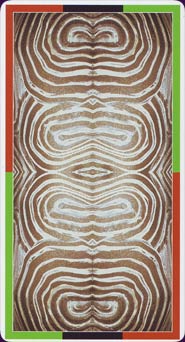 I just received my deck and I actually like this deck. The author writes that the deck is not intended to reflect just one particular aspect of Africa because it is so broad. He also acknowledges that Africa is the mother of all civilization so he wanted to express a broad range of Africa. The African American images of jazz players, inventors, discovers, etc. are in the background but seem to serve as a link to the meaning of the card as well as a link to traditional African mythologies and archetypes. The thought and depth put into it is outstanding. The pictures are detailed, expressive, and colorful. (I also have the African Tarot deck which has childlike images that I did not like.)

The African American tarot's images span a large variety of images from the continent of Africa. Some of the cultural influences are Zulu, Yoruba, Ibo, Akan, and places like Benin, Togo, Congo, etc. I love that. The only issue that I have with the deck is that it did not come with a more detailed explanation of the people, Archetypes, symbols, and mythologies. It would have been not only more helpful to connect with the images, but also a fascinating and informative read. I feel pretty informed about my heritage as an African American and and African decendent. I am pretty familiar with a broad range of African Spiritual Traditions but I will now have to do even more research on some of the images in order to draw out the full meaning of the card. Nevertheless, I am pretty happy with the deck.

This is an African American themed deck, following the traditional 78 card format. Titles for the Major Arcana follow the traditional format, with Strength at VIII and Justice at XI. The suits are Wands, Chalices, Swords and Pentacles, with the Court Card titles being Knave, Knight, Queen, and King. There is a Little White Book (LWB), but no companion book. The instructions in the LWB are in English, Italian, Spanish, French and German.

The LWB starts out with the notation that the human race got its start in Africa. That for thousands of years Africa was the cradle of mankind, and that from here developed great civilizations and many different ethnic groups. Slavery, racism and segregation are said to have robbed individual African communities of direct ties to their original culture, although those ancient bonds were never entirely broken.

Afro-American culture, art, history and mythology are said to be defined by their common origin: Africa. A number of key concepts were used to form the foundation of this deck:

Archetypes: Taking the traditional Tarot archetypes and structuring them in a trans-cultural manner.

Mythology: Associations of the cards with one or more divinities of Afican origin.

Tradition: The traditional Tarot is structure is followed, with the esoteric symbols of the Western culture replaced with symbols of African origin.

Association: Mythical aspects are connected to historic reflections as defined in the Afro-American culture. Built on this foundation, the “African American Tarot” can then be read on two distinct levels: (1) a reading based on the abstract and general meanings associated with the myths, and (2) a reading that enables a Western reader of African origin to develop a deeper bond between the images and myths and his/her own experiences.

A specific ten card reading template, entitled Anansi’s Web, was developed for use with this deck, and is presented in the beginning of the LWB.

Each card is presented, text only, by title, mythological association, Light and Shadow meanings. From the book:

“King of Swords – Asa (protector god of mankind, Kenya) – Rationality and logic, love of the law. Care for the weaker, intellectual realization of the self. Cautious, objective person.”

The cards themselves are approximately 2 5/8” by 4 3/4”, using glossy card stock. The backs show a wnite outer border, followed by a multi-colored inner border: black in the top and bottom center, reddish-brown in the upper left hand and lower right hand sides, an green in the lower left hand side and upper right hand side. The imagery in the middle of the card shows black and white with reversible eyes at the top and bottom of the card.

The card faces have a white border, with the top and bottom borders going from reddish-brown, to black, to green. In the middle of the card, on both sides, is a short yellow strip of color. The upper and lower corners show the card titles in the different languages. The Major Arcana show Roman Numeral in the center on top, with the card title in the corners. The Pips show the card number in the center on top, with the suit in the corners. The Court Cards show the title and suit.

The imagery in this deck is quite interesting – the main images are in color, with the Pips showing a monochromatic scene from African American history. There is a relatively small amount of nudity in this deck that may make it inappropriate for use in some situations (Seven of Pentacles, Two of Wands, Judgement, The Stars, The Lovers, Six of Cups, The Magician, The Empress).

There are many striking moments in the cards: the skeleton running along side the virtual runner in the Seven of Pentacles, the hooded “Grim Reaper” figure in the Six of Swords, the figure in the Two of Swords, literally divide din two – one half light skinned, the other dark skinned. In the Five of Chalices we see Moshanyana, the hero slayer of the monster Kholumolumo from South Africa.

The owl on the Ten of Wands is striking, as is the figure climbing the unending golden stairs on the Four of Swords. The Towers shows a Gaunab, god of evil, catastrophes and epidemics, with lightening int he background, climbing over rushing water that has overwhelmed a village. The rainbow on the Ten of Chalices is portrayed as a serpent. The World shows a male figure, seated on a cloud, holding a globe, encircled by a serpent. The Ace of Wands shows a barren tree standing alone, with the sun in the background.