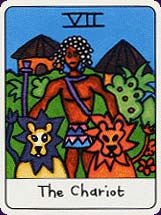 The African Tarot is a cute revision of the standard Rider-Waite with an African theme. Thick black outlines surround bright colours in the simple and two-dimensional art on small-size cards.


Card Images from the African Tarot 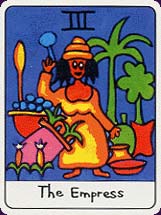 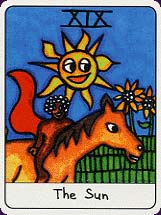 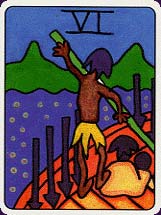 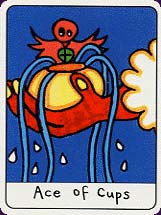 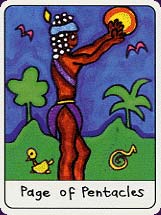 This could very well be the single cutest tarot deck in existence.

The title "African Tarot" is probably quite offputting to many people: are the art and descriptions specifically meant for Black people? Not at all. I am a black woman in Washington state and have showed this deck to countless white friends who have found it adorable. Its booklet displays meanings that seem pretty much standard to Rider-Waite system. Indeed, I've seen this deck defined as a "Rider-Waite clone".

The suits are also traditional: Wands, Swords, Cups and Pentacles. However, in the artwork the Swords are depicted as spears, the Cups as gourds and the Pentacles as golden discs. It is a very colorful (mainly primary colors, even), happy little deck, even though the people rarely give more than a vague Mona Lisa-type smile, if that. They have dark skin and dredlocks, but that's about where any cultural departure ends.

The artwork, however, was the clincher for me. There are a lot of "whimsical" decks out there with "childlike" art, but so help me, the art on the African Tarot is something I'd be *proud* to display on my 'fridge. It's childlike, but also of good quality and seems very secure in itself, a rarity in many homegrown "whimsical" decks.

The cards are approximately 3" x 2.5" and covered with what I assume is a standard, slick coating. This makes them easy to shuffle, but I have a habit of dropping some cards if I'm just going through them while holding them in my hands. The design on the back is as charming as each individual card design -- two spotted tortoises in the sun, reversed from each other so you can see either of them upright as long as you're holding the card lengthwise. According to the South African author, the Shangaan culture considers the tortoise a symbol of "the slow coming of justice". Appropriate, no?

The deck comes in a brown, corregated cardboard container which, after a few years of ownership, still seems quite sturdy. Both sides of the box are decorated with the same cardstock as the deck, with hints of the art style and relevant information printed on them. It gives the box a very environmental feel that goes with the deck very well.

This deck's only failing is that it's a little too cute for general-purpose readings. I would not want to use this deck to read for someone asking about an illness in the family. However, I feel that this is a fair assessement: the authors tend to shun reversals and have subtitled the deck "Journey Into the Self." It is meant to be a lighter deck, and a loved deck.

For me, it is. Very much loved, in fact. However, don't let the "lighter" aspect fool you. One of the spookiest tarot experiences I've ever had, involving a lost -- and later recovered -- card and some odd correspondences, happened involving this deck. It's not a *fluff* tarot. I would consider it more of a powerful specialty deck.