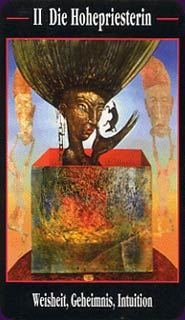 The Akron Tarot is a German set with 80 cards and a large 395 companion book. The surreal Tarot scenes depart from standard imagery and emphasise the female energies.


Card Images from the Akron Tarot 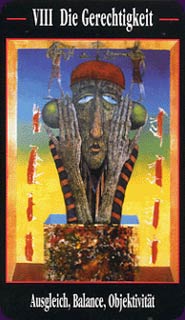 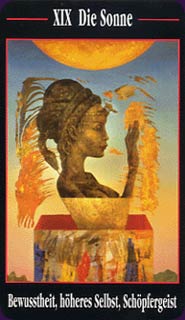 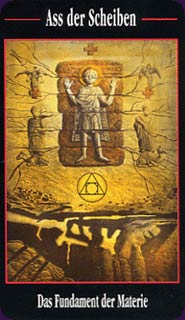 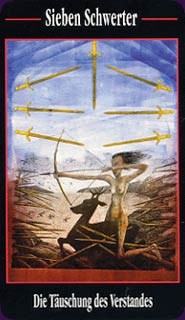 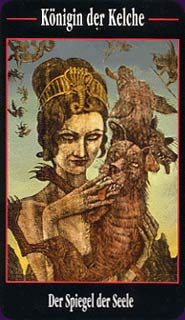 This is an 80 Card Deck, companion book included, and originally published only in German (English edition now available from the publisher). It is a standard-sized deck with very sturdy and well-made cards. The card back shows a Goddess with luminous lines before a star field and hides whether the card is upright or reversed.

This deck is very unique in many ways. For one, the author, the same author of the Baphomet Tarot, and team of people working on the deck were hoping to create something that would stand the test of time and be completely different from any other decks out there. They managed very well. The set includes a 395-page companion book, layout poster, and a well-made box for storage. The package is very heavy, which is why the price of the deck is a little higher than average. The book and box were designed by Antje Hellmanzik, and are works of art in themselves.

The artwork of the deck is surrealistic and symbolic, done by the well-reputed German artist S. O. Hüttengrund. It is vaguely Egyptian in places, Byzantine in others, Meso-American in some, and simply bizarre in many. The artwork is done in collage-style, but it is a little different than your average collage deck. The pictures draw the eyes straight to the center of the image rather than scattering the focus the way a lot of collage decks do. The images are dark, but the not to the extent of Akron’s usual work, and very suggestive as to the meanings of the cards (which have been altered a bit in the companion book).

There have been some complaints that the standard-sized cut of the cards make the images too small to really appreciate and some that the images themselves are not for the meek of heart. Some experts have wondered if the dark-themed images may contribute to depression, but that is a subjective opinion and one simply has to use their best judgement on whether or not the artwork actually appeals to them. The companion book has also had some complaints concerning the interpretations: they are too vague to be useful, they contradict themselves within the same paragraph, and the meanings are twisted to the point that some experienced readers have had difficulty in understanding them.

The intentions of the author were that the cards should be seen from a female point of view and many of the cards have a strong emphasis on the Goddess aspect. Several of the layouts included in the book also have this same theme behind them. The general opinion expressed in the companion book is that the Tarot generally identifies a little too much with a male-dominated worldview and not enough with the female. The few that do are generally very dark images. Contrary to his presentation of this fact, the images in the Akron are just as dark and seemingly dangerous.

The deck itself is a divergence from the Kabbalistic images, setup, and interpretations, but still leans hugely on the Jungian perspective within a similar format. The suits do not vary, with the exception of Sticks rather than Wands, and the elemental aspects of the suits are still the same. The Minor Arcana cards do have some different interpretations than most Tarot users are used to. The Major Arcana is also slightly different. The text on the cards gives a rough idea of the meaning behind the card, but differs greatly from the traditional interpretations. The companion book doesn’t include a keyword section, so this is definitely not a deck for beginners. The images and cryptic descriptions seem to be designed for intuitive reading rather than interpretations, so it would probably only benefit the more advanced readers.

The two extra cards in the deck are with the Major Arcana and are extensions of The Devil XV. The first new card is The Black Goddess, numbered XV-I, and is a representation of the darker side of the female soul. The Scarlet Anima, which is the Black Goddess reversed, is numbered XV-II and is representative of the hidden female forces in the male nature. The second new card is The Dark Child and represents the self-destroying aspect of human behavior. This card is unnumbered, but has an upside down Ankh where the number should be. The author’s intention of this could be that The Dark Child, unlike the rest of the Major Arcana, is not a stage in a cycle that we go through but rather something that is always a part of us all the time.

While the artwork may seem disturbing to some, it is a very unique and well-made deck designed more for the intuitive reader with some experience under their belt. The artwork and general mood of the deck would appeal to many if they keep an open mind and not let the darker aspects muddy their interpretations of the cards.