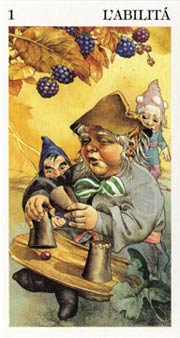 The Tarocchi dell' Alba Dorata feature gnomes, elves, pixies and fairies on its 22 cards. This is the majors-only edition, published in 1990, of decks later released as the Tarots of the Golden Dawn, Tarot of the Hidden Folk and the Enchanted Tarot. 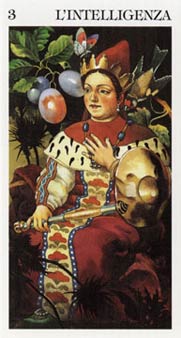 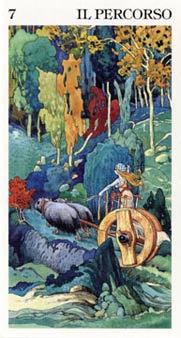 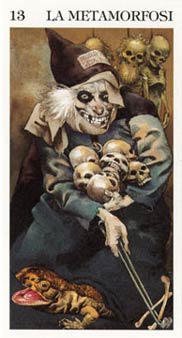 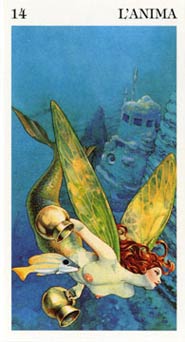 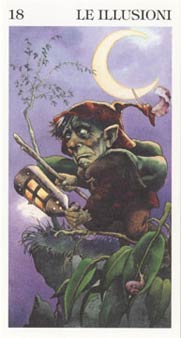 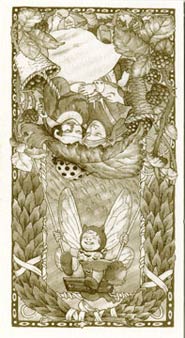 This deck happened into my life in a very lovely way - as part of the generous gift package that Llewellyn presented to those who attended the 2003 Reader's Studio in New York City (sponsored by the Tarot School (Ruth Ann and Wald Amberstone) and Llewellyn Publications). It is a "majors only" presentation of this deck - there is a full 78 card version.

The cards are approximately 3" by 5 3/4" - a little difficult for smaller hands to handle. The card stock is good quality, but the cards are not coated in any manner, so extra care would need to be taken when using this deck. The reverse side of the cards is quite interesting - on one end we see a "U" shaped vine, with a child-like figure with wings swinging in the middle. On the other end - and the card must be flipped end over end for the figures to be upright - we see a couple seated under a leaf - a full basket of apples on her arm, and abundance of fruit and vegetation surrounding them. There is a 1/4" white border on the backs.

The face of the cards shows the same 1/4" white border. The number and the name of the card are on the top, in black. The color used in this deck is vibrant and intense. The deck is, at heart, an art deck. Real figures are mixed with wings and fins to give the card a very surrealistic look. Many of the cards show elf and fairy type figures - with human-like faces.

There are several cards in this deck that draw my interest immediately. L'Energia (Strength) is one of them - in this deck we see a winged figure attempting to subdue a large frog. Il Fato (The Wheel Of Fortune) shows a large female head at the top of the wheel. To her left is a male figure hanging on to the wheel, to her right is what appears to be another male figure being moved head down into the water. To the bottom left of the card we see a male figure, submerged in the water except for his head, hanging into the wheel for dear life!

I like this deck for its wonderful artwork, and its sense of joy. My only problem was that the LWB that accompanied the deck was in Italian - which I do not speak or read! Because of the nudity in the deck, I would not use it for public reading purposes. However, I highly recommend this deck for those who collect decks because of the artwork, or for those who would use it for personal readings.