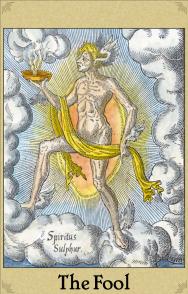 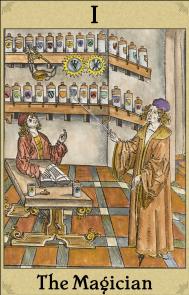 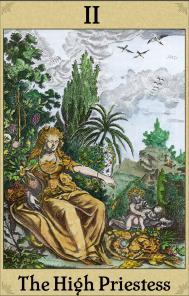 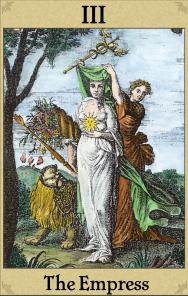 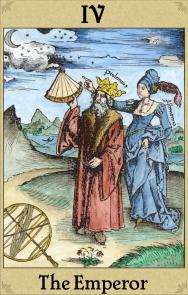 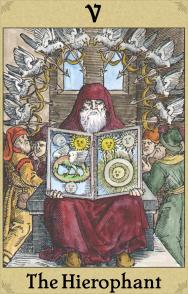 The Alchemical Emblem deck is currently out of print and available on through collectors and Tarot shops that still have a few on hand. Tarot Garden is one of these at last check, Amazon has had a few in the past, and of course there’s always e-bay.

The deck is a selection of alchemical symbols and engravings, originally colored by publisher Adam McLean, that have been assembled by artist F. J. Campos to create a very appealing Tarot deck. The cards are 4.7 by 3.1 inches (120mm by 79mm), standard size, laminated, and fairly sturdy. The artwork has an old-world feel brought into a modern world vibe that is very appealing to the eye, soothing to the spirit of the reader, and excellent for both interpretive and intuitive reading. Loaded with symbolism that can easily be interpreted on all it’s own, the images give a ready explanation of the meanings behind the cards. There is only the one difference in the numbering system: Justice is the eighth card and Strength is the eleventh. Each of the cards has it’s own distinct feel even while the deck as a whole maintains the theme throughout. Even with no background into the alchemy symbols used in the artwork, it is easy to decipher the cards. It would be an excellent deck for beginners but challenging enough for the more advanced Tarot enthusiasts, and a prized asset for a collection if only for the artwork itself.

F. J. Campos, who lives in Barcelona, designed the Alchemical Emblem Tarot with an eye for detail to bring out the meanings of the cards and shed some light on the alchemical meanings at the same time. He is well known for the many tarot decks he has designed for the Orphalese Tarot system and for the dozens of interesting decks he has produced using computer images. For this deck he made use of some of the alchemical emblems originally designed and colored by Adam McLean, most known for the the Hermetic Journal, published between 1978 and 1992. The entire back issues of the Hermetic Journal is now available on CD-ROM. Adam McLean (1948-) is considered an authority on alchemical texts and symbolism. In 1995 he began the Alchemy Website, which provides over 100 megabytes of information from texts, documents, pictures, links to other sources, and anything you could ever want to research on the subject. His own research was originally influenced by the depth of psychological and esoteric views on alchemy, but has been taking a considerably more scholarly appraoch since the 1980’s that leans heavily on the original manuscripts, texts, and imagery of alchemy and leaves the wild speculations of esotericists and psychologists to others that try to popularize the subject by making it flashier to the modern world.

Using a Majors only deck is generally best for self-exploration, and the artwork and imagery in this deck certainly helps to bring some of the deeper meanings of the Major Arcana out of the shadows and into a world of light. For anyone interested in a more Old-World style to the cards, this deck is an excellent choice.