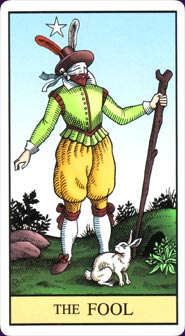 The Alchemical Tarot: Renewed is an updated edition of Robert Place's Alchemical Tarot. It has improved illustrations, an extra Lovers card to make a total of 79 cards in the deck, and smaller borders around the scenes. Now out in a third edition as well. 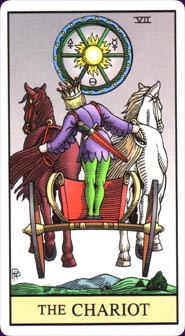 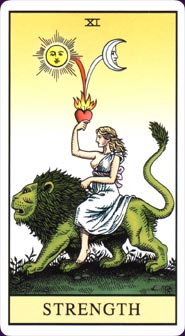 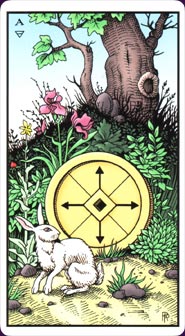 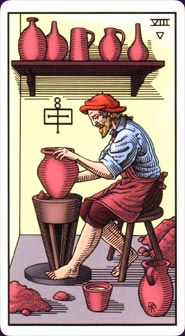 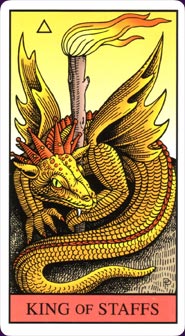 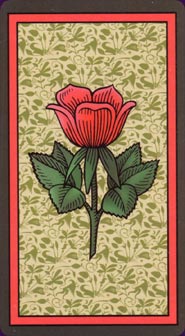 “The power of the “Alchemical Tarot” lies in its ability to act as a tool for communication with our inner wisdom.”

Place is an internationally known mystical artist (“The Buddha Tarot”, “The Tarot of the Saints”, the soon to be released “Vampire Tarot”, and “The Tarot: History, Symbolism and Divination”). For him, the deck began with this flash of insight: (a) symbolic images from alchemical texts were interchangeable with the standard Tarot trumps, and (b) the Tarot outlined the same process of mystical transformation as alchemy. The result of eight years of study and work was the “Alchemical Tarot” – the ultimate melding of traditional Tarot imagery and symbolism with that of traditional alchemy. The alchemical symbols magnify the symbolic purpose of the Tarot. From the “Alchemical Tarot” site:

“Each card in The Alchemical Tarot was carefully drawn to capture real alchemical symbols in a way that is clear and concise and in harmony with the aesthetic balance of the composition. They are the natural vehicle of the unconscious and they can be used by any Tarot reader at any level, from beginner to master, in the same way as other decks.”

The renewed edition is a 79 card deck with accompanying LWB (Little White Book). The box the deck comes in shows the High Priestess on the front, and the Emperor on the back. The box opens from the top.

The LWB begins with an introduction by Place, where he talks about his initial flash of insight into this project during the Harmonic Convergence in August of 1987, while he was studying an alchemical image that symbolized the Philosophers Stone. He also states that in this new edition the illustrations have been improved, and the columns that flanked the cards on the original publication removed, so that the imagery is larger, and fills more of the card. This edition also contains two versions of the Lovers card (hence a 79 card deck) – the original version (that was more sexually explicit than traditional versions), and the toned down version that actually made publication.

The Major Arcana relates to alchemical materials and processes, with the Philosopher’s Stone itself (also known as he Red Stone) represented by the World. The four suits relate to the four elements (Earth, Air, Fire, and Water) and the four Jungian functions of consciousness ( sensation, thinking, feeling, and intuition).

The traditional titles are retained for the Major Arcana. The suits are Coins, Vessels, Swords, and Staffs. The Court Cards are Lady, Knight, Queen and King.

There is a myriad of unique imagery in this card: the Fool is blindfolded, with a rabbit at his feet; the High Priestess is literally standing on water; the Empress has a child at her feet; to the left of the Hierophant we see a male statue, to the right of the Hierophant we see a female statue, behind the Hierophant, to his left, we see a red candle against a full Sun, behind he Hierophant, to his right, we see a white candle against a night sky and the Moon; the Chariot appears to be floating in the air, and is shown from the back; a red and yellow Ouroboros is shown in the sky to the left of he Hermit; the Hanged Man is tied with a snake would around his ankle (while coins very realistically fall from his pockets!); Death stands with a Raven on his shoulder;

While the presentation of the “Alchemical Tarot Renewed” has a very different feel from the original deck (due to the pillars on he sides of the cards in the original publication), it is stunning, and quite easy to work with. There is a fair amount of nudity, but it is placed in context of alchemical imagery. The reissuing of this deck is a great gift, as this is a deck that can be used by all levels of Tarot students.