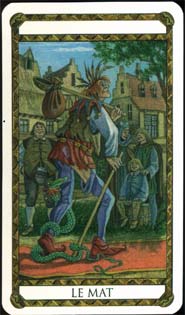 Mab, Oberon and other leaders of the Fae feature in the sumptuous major arcana of this French tarot deck, while the court card characters are drawn from Amber, a sci-fi fantasy series. The minor arcana of the Amber Tarot are, unfortunately, plain pip cards.


Card Images from the Amber Tarot 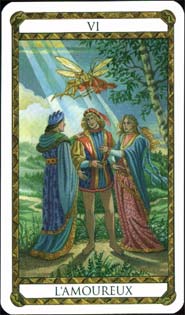 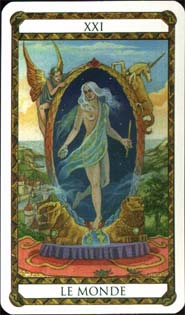 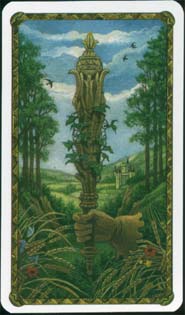 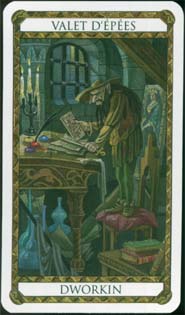 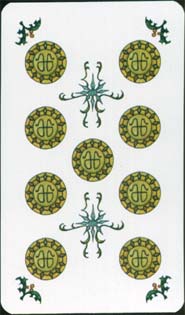 The Amber Tarot is a French-published RPG (role playing game) deck, based upon a fantasy series by Roger Zelazny. I loved its artwork as soon as I opened the box. The quality of the exquisitely blended, muted, greens, blues and pinks was incredible. I grew more excited as I continued looking through the major arcana. It looked like it was an amazing deck...

I flipped past the World card, onto the Ace of Cups. It, too, was almost indescribably beautiful. Then I saw the Two of Cups and my heart sank. I shuffled a few cards further through the Cups, then the Swords, hoping it wasn't true. The minor arcana were undecorated pip cards! Only the fully illustrated court cards, each represented by a character from the Amber series, relieved the plainness of the minors.

I wanted this deck to be my favourite. The majors were gorgeous. The aces, even better. But the plain pips were such a let down, especially as they have a white background and are literally the same symbol printed over and over.

I should not have been surprised, as being a French tarot deck, it does follow the Marseilles tradition of plain pip cards. (Decorated minors are attributed to be an invention of Pamela Colman-Smith, when she created the art for the Rider-Waite Tarot in the early twentieth century, as she was the first to include scenes on the 56 'unimportant' cards.) But I'm just not a fan of Marseilles-type decks. Though the contrast between the everyday details of life and the more spiritual major arcana is marked, I like illustrations on all the cards. I feel that the deck might as well only have 42 cards in it, for all the good the numbered pip cards do for visual stimulation. I realise some people find them evocative of memorised meanings, but they don't do it for me.

On the good side, le Tarot Ambre does come with a little white book, but it is in French. Or in this case, it is a medium white book. A glossy, black and white, 128 page book explains in French how to use the cards. It offers spreads as well as card meanings. Each card is pictured with a description: a paragraph and keywords for the major arcana, just keywords for the minor arcana. Reversed meanings are given throughout. Both book and cards are packaged in a moulded plastic case, slightly wider than a video case. The cards themselves are high quality, printed on flexible, thin cardstock with no burrs on the edges.

I adore the illustrated artwork in the Amber Tarot. I might see if I can get used to the unadorned minors.