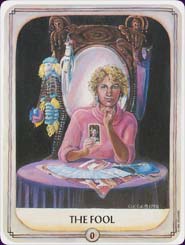 The Ancestral Path Tarot combines traditional Native American, feudal Japanese, Arthurian English and Egyptian symbols and images into a beautiful set of 78 tarot cards. Each suit of the minor arcana is matched with a particular culture or tradition. 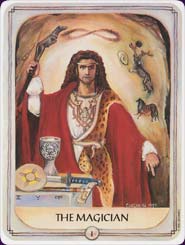 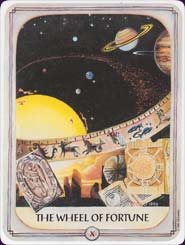 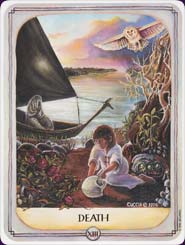 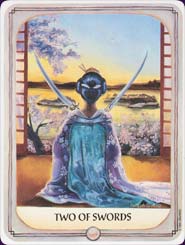 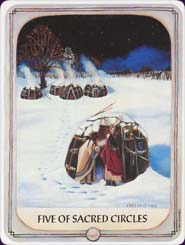 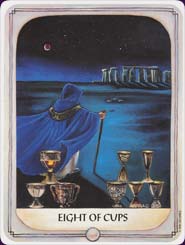 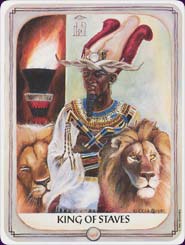 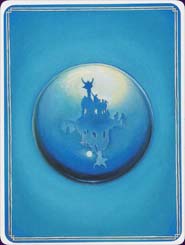 I only recently started to read Tarot although I read playing cards for many years. I had a pack of the standard rider waite cards and now I was looking for a pack to suit ME.

The first time I saw this set of cards I was blown away by the beautiful imagery and even though I have collected many different decks now I still consider this one to be my favourite for reading for myself and others. The picture scenes are loosely based on the Rider Waite deck but some of them are specific to the deck, however you will have no problems in knowing which cards represent which. The four suits are based on four ancient cultures recognised for their cultures. The cups being depicted by Arthurian England with characters from the time of King Arthur. The colours are beautiful and vibrant with glorious skies and sunsets in the background. The Wands depict scenes from Egyptian and African cultures. The Swords have (and I prefer these ones the best) absolutely stunning scenes based on ancient Japan whilst the pentacles or discs called 'sacred circles' in this pack depicts scenes from snow covered red indian lifestyles.

As a person who would like to see all cultures live harmoniously together whilst keeping their own identities and histories alive then I find this pack really speaks to me. All the cards are beautiful whilst some also hold suprises such as 'the fool' which actually depicts Tracey Hoover reading the tarot. This is the person that devised the tarot and wrote the book which accompanies Some of the other cards feature people close to the author as well.

Also, the size of the deck is only slightly larger than a standard pack of playing cards so as I have small hands I find it very easy to shuffle and handle this pack.

As with all the best tarot cards the picture on the card should not spell out everything at once and should have small but relevant details that are noticed only if relevant in a reading for example. I noticed only this week that in the eight of cups, one of the cups shows the reflection of a fire out of the picture which I had not noticed before. This I interpreted as leaving something warm and comfortable behind to look for something better.

I think this deck is suitable for the experienced tarot reader and the novice alike. Standard meanings can be applied to the cards which also have an excellent little white book in the pack which gives a lot more insight than normal and is as almost so good that you do not need the book which you can order to accompany the deck. I would say that the book does give a little more insight into the history of the cultures and why they are depicted on the cards in the way they are.

All in all a brilliant little deck and highly recommended.

Ancestral Path is the most used deck in my collection and I find myself always returning to it. Julia Cuccia Watts has succeeded brilliantly in creating imagery that speaks to the Oversoul and of the many pasts we, as the human body of the world, have shared. The paintings are exquisite and simultaneously express many levels of meaning. The individual cards often follow traditional symbolism, although there are also quite a few original visual interpretations.

The 4 suits of the minor arcana are represented by four different cultures each in a different period of time; Cups - Arthurian England; Swords - Japanese Samurai cult; Sacred Circles - Native American 1700's; Staves - Egyptian 19th Dynasty of Ramses II. The minor arcana cards are just as detailed and lovely as the majors in this deck and truly come alive in the process of reading with them. I've also found that people I've read for are very drawn to the imagery and seem to connect with the cards in very meaningful ways. This is a deck that could evoke the intuitive aspect in everyone.

In the accompanying book by Tracey Hoover, an "Ancestral Path Wheel Of The Year" using all of the minor arcana cards is delineated. Watts (the author of the Wheel system) does not follow any other astrological/seasonal method I've seen, and yet this Wheel of the Year has proven to lend some valuable insights. As an astrologer, I've found it enlightening to use Julia Cuccia Watts attributions with natal charts linking each planet and house cusp with its corresponding card. A card for ones birth date can also be used for additional insights without delving into astrology.

One of my favorite cards in this deck is key 18, The Moon, showing a huge glowing moon shining over a night-time landscape with a large body of water running north to south. Out of this water rises a grey haired grandmother who is weaving patterns of fabric on a loom. This imagery really spoke to me about the emotional habit patterns we weave and have woven in the past and how in becoming more conscious and aware of them and in connecting with the Source, we could choose to weave the fabric of our lives more purposefully.

I've enjoyed using this deck so much! Ancestral Path is a tried and true treasure.

This is a very lovely deck and has great depth. The pictures elicit an emotional response as well as a more intellectual one, making it easy to read with intuitively. This is helped by the amount of detail in the images.

The cardstock is of good quality and is easy to shuffle. The cards are small enough to be easy to handle yet of sufficient size to show the beautiful art work.

As a woman in my fifties, what I have most appreciated about this deck is the way it depicts older people. The Queen of Sacred Circles, for example, shows a grandmotherly woman with white hair and wrinkled face yet she is still beautiful. This is typical of the images of older people in the deck and is not something I have seen elsewhere.

Others have commented on the way that the cards depict people of various races and genders. What is lacking is any obvious reference to alternative sexual orientations. For example, the Lovers card (which is one of the more passionate I have seen) clearly shows two people of opposite genders. There is no alternative card for gay/lesbian couples. Although the Hierophant is female, which is unusual, there are missed opportunities here to offer a wider view of gender and sexuality.

My other quibble is the depiction of The Star and Temperance by their opposites. The Star pours her water out onto a barren landscape as she looks up without hope. Temperance is a Native American woman, looking disgruntled as she pours water from bowl to bowl in an empty land without trees or flowers.

This is not a perfect deck but the sheer beauty of the pictures draws me back to it time and again. It is not a deck I shall part with any time soon. (Comments based on the French version of the deck by U.S. Games ISBN 5411068670237)

The Ancestral Path Tarot has several things going for it. I love the various suit themes as they enhance and expand the meanings of the suits. For example, feudal Japan representing the Swords brings a grace and a sense of honour that most Sword suits lack. I have always believed the Swords had a "bad rap" in their portrayal: feudal Japan with its traditional portrayal of the ferociousness of a Samurai warrior who also writes poetry helps make sense of the concept that a suit of ideas can be both intense and beautiful.

The Ancestral Path's use of Arthurian England for the suite of Cups has brought a deeper understanding to me of the varied types of relationships that Cups can include. So often, Cups seem to represent a fanciful or shallow representation of this part of Life. The card that made the greatest impression on me in the Cups was the 8 of Cups: the portrayal of the Seeker leaving all that seems important to those living in the Mundane World, a person walking away from all that was there right at hand for him often made me interpret the card as a search for something that others might not understand. This painting showing Stonehenge as the Seeker's goal is so spot on! It delighted me so much that it was one of the major reasons I originally purchased the deck.

Using Native American symbolism for the suit of Sacred Circles [Pentacles] is such a great decision from my perspective, especially since all of my spiritual/metaphysical understanding of Pentacles includes a strong spiritual and/or emotional component to it. Native American beliefs and their portrayal in this deck takes you beyond money for money's sake by encouraging the understanding that money is the seed of all that wealth represents (our self value, our ability to connect with the Cycles of Life, that what we give out we get back, and so much more). This suit's symbolism requires our nurturance, our tender care in order to flourish and grow in our lives. The Native American tradition of realizing and working with the Unity of life fits very well with taking the potential interpretation to a greatly expanded way of looking at the suit of Resources and Prosperity.

The Staves are developed using an Egyptian/Ethiopian concept. This suit represents not only career but in my experience, lifestyle as well. Knowing the success, the mastery over trials, and the concept that out of the desert of Life's experiences we can rise to the greatness and majesty represented by Egyptian success, the suit of Staves truly is inspirational as its fire nature requires.

In the Major Arcana of this deck, there is such a depth and richness in each card that wherever your eye lands, you will have something of great meaning to interpret. As an example, the card of The Fool shows the card the Reader holds is exactly the situation of the Reader herself. This gives a sense of continuity of Life as well as an appreciation for how personal the messages truly can be.

If you haven't already guessed, I really love this deck. It has so much potential for in-depth readings. The deck is suitable for those with an excellent understanding of Tarot but, most importantly, who are also receptive to each card bringing something new to the table for each consult. This is not a deck for formulaic interpretation or for those who tend to memorize and then offer the same interpretation time after time. The Ancestral Path Tarot is an excellent teaching deck and for the person who is receptive, it will teach the interpreter as well as the seeker. Indeed, this openness on the part of the interpreter is, in my experience and opinion, a requirement for successful use of the deck. This is one of very few decks that I can use for personal interpretations.

I cannot recommend the Ancestral Path Tarot deck highly enough. It is one of the most effective tools an interpreter can have in her/his repertoire.

Get 15 Free Tarot Spreads Today!
We'll email you our 15-page eBook now, and you'll receive updates and featured decks from us in future.