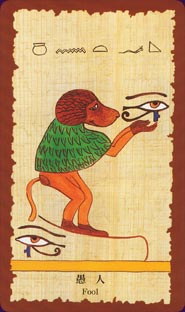 The Ancient Egyptian Senet Tarot Oracle Deck uses the historical tarot structure to build a unique deck of wholly Ancient Egyptian deities, icons, and symbology. The regular 78 cards are titled in Chinese and English, and there is one extra card that sums up the trumps. 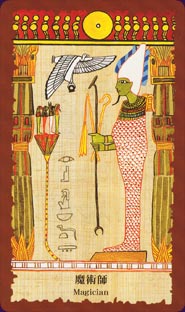 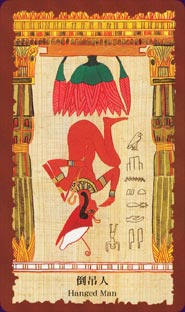 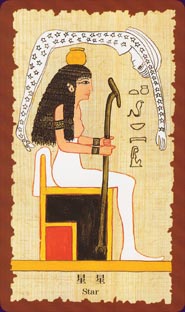 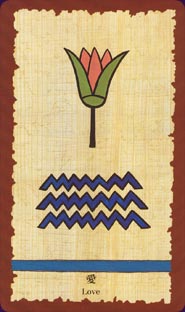 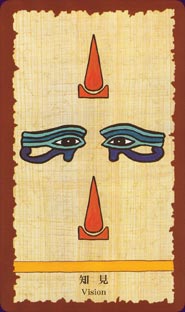 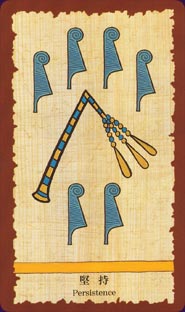 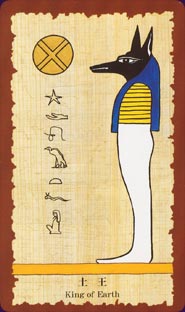 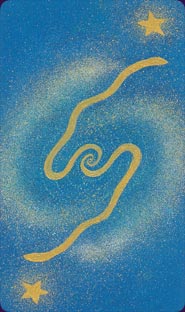 In author Douglass A. White’s first Tarot deck, the Ancient Egyptian Senet Tarot, he has linked the tarot with the oracles of the Ancient Egyptians, in particular the Game of Senet. This game was played on a game board of thirty squares, each representing a deity, “like a portable temple” and the movement of the pieces “represented the progress of a person through life and the lessons to be learned along the way”.

According to Douglass, the game was played with backgammon-like rules, but also used for consulting the gods before making major decisions. “Although we don’t find decks of ‘Tarot cards’, the tableaus from The Book of the Dead and the many surviving engraved seals attest that the Egyptians indeed painted cards on papyrus with pictures of the gods and major amulets on them.”

Each of the 22 trumps has an image of an Egyptian god or goddess, their name printed in hieroglyphics, and the title of the card in English and Chinese characters. The extra card, the ‘Luxor Men-Mut Tableau Card’, stands for all of the trumps. Its image is a tableau from a wall carving in a temple at Luxor which pictures the deities and amulets from all the trumps.

Continuing the Ancient Egyptian iconology, the forty numbered suit cards are not European-style pips, or scenes deriving from the Rider-Waite-Smith model. Instead, there are four Ancient Egyptian symbols that represent the four elements of suits, and show a different Ancient Egyptian ‘talisman’ – an amulet or icon – for each numbered card. The suits are:


The sixteen court cards have different names to “represent aspects of an individual’s spiritual nature rather than social ranks from Medieval European feudal society”. The kings are here the ‘Four Kings of the Elements’, the queens are The Four Senses, and the remaining eight that would be pages and knights are here the Eight Energy Bodies or Souls (or chakras) - Khaibit, Ba, Ren, Ab, Sekhem, Ka, Khat, and Aakhu. “The Egyptians believed that an individual is composed of a cooperative team of energies, so that it is actually composed of eight bodies combined into one.”

The quality of the cardstock is good; strong and yet still flexible. The faces of the cards have brown-red borders surrounding the central image of a papyrus background overlaid with symbols in strong flat colour with a black outline. The reversible backs have a spattered gold design on blue, with a star in the top left and bottom right ad a kind of swirling design in the centre.

The booklet begins with a nice logical introduction that explains the specifics of the changes made to the familiar tarot structure to suit the Ancient Egyptian theme. The meanings of the 22 trump cards which follow, begins with The Sun. Like the rest of the trumps, the booklet lists a few keywords, the pictured Egyptian god, the linked Hebrew letter, organ of body, and (astrological) sign. The minors are similar, with the Egyptian name, the card title, and keywords.

The second half of the booklet is used to explain The Oracle Game Board, the Senet Oracle game on which this tarot deck is based. It outlines The Oracle Board Layout, Oracle Topics for Divination, Consulting the Senet Oracle, Rules for the Game of Senet, and Additional Rules, followed by reference materials used in the making of the deck.

The Ancient Egyptian Senet Tarot takes the historical tarot structure and replaces the conventional European symbols with the symbology and iconology of Ancient Egypt. It’s an interesting deck for Egyptophiles or tarot collectors.