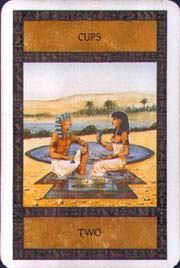 Tarot structure and Egyptology have been blended seamlessly in this lifelike-looking deck of Ancient Egypt. The author has drawn on a mix of Egyptian history, mythology and daily life to produce the very readable 78 Ancient Egyptian Tarot cards. 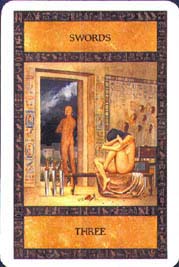 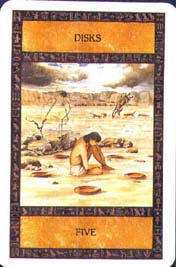 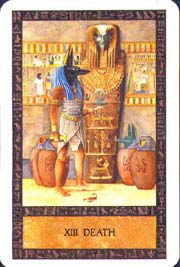 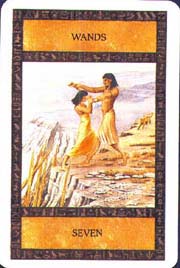 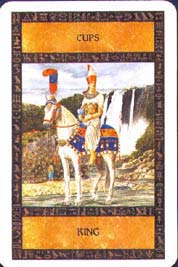 I love this deck! The imagery jumps off the card at you, making reading a lot easier than with many other decks. The author's explanation of the symbology synthesizes the complexity of Egyptian mythology into an easily understood form. Anyone with even a small background in studies of ancient Egypt will recognize the buildings, temples and other scenes depicted on the cards.

The cards are large, but the picture fills up most of the card, so there is very little in the way of white border. When the book is referenced for explanation, not only does it describe each card, and the significant symbols found, but the card meanings themselves are easily associated with the vivid imagery. Each element in the card is explained in detail, including the colors, and associations of the 'totem' animals. The major arcana explores the myth of Osiris, using individual 'scenes' for the cards.

In the minor arcana, the artist/author ties in astrology and planetary associations that will aid someone with a fairly solid astrology knowledge in understanding the card. Each card has a title that ties into the scene's symbolism, making it (the symbolism) even easier to understand, and there is a logical progression in the scenes from Ace to 10. The 'court cards' even use Tattwa to explain the aspects of the cards 'personality'. For example, the court of Water is the Prince (Air of Water), the Princess (Earth of Water), the Queen (Water of Water) and the King (Fire of Water).

The detail in each card is very well researched. Even the back of the card is beautiful and accurate - a phrase from the Egyptian Book of the Dead. The author even includes a section on this amazing text in the book.

The accompanying book is easily understood. The chapters are broken up in a logical fashion, and it includes general information on tarot, such as origins and usage. A page about symbolism within the tarot is included, which explains the evolution of the modern tarot and it's connection to the Cabbala. The book also contains information about Egyptian mythology/culture, as well as comparisons to the much later Arthur legends, illustrating how resurrection myths, such as that of Osiris, were retold and refined many times in other civiliations.

The only 'problem' with the deck that I found was the Sword/Air and Fire/Wand association. Many people view Air as Wand and Fire as Swords, but this is easily 'worked around' by the author insightful associations with Cabbala, astrology and, of course, symbology.

I strongly recommend this deck to ANY tarot reader, most especially for the rank beginner. The combination of well written book and easy to understand symbology makes this deck a great one to begin tarot exploration. The added elements of Cabbala, astrology and tattwa will continue to challenge and refine the abilities of more advanced readers.

I absolutely love this deck. I don't even know where to start! At first, I wasn't sure if I liked the art, but the more I looked at it, the more alive they seemed to become. It is the details in the pictures that make them so unique. It's almost as though they transport you to the time of the Egyptians...

And you really get taken in by it all when you read the accompanying book! Barrett does a wonderful job in his explanations. His use of prose is enchanting, sometimes it seems more like poetry. His descriptions of each card are extremely thorough and vivid. I have never encountered anything about Egyptian history, yet I was still able to fully comprehend the short history he included, as well as the gods' relations to the cards. I especially loved the titles he gave each of the cards. It made the meaning of each card that much easier to grasp and remember.

The only thing I disliked about this deck was the size, they are a little large for my tiny hands, but that was easily overlooked in regard to the explosive energy that seems to radiate from the pictures.

I found it incredibly easy to read these cards. The pictures are so detailed, especially in the minor arcana. It's almost as though you can feel the emotions that are trying to be conveyed as though they belong to you. I would recommend this tarot deck to anyone that reads tarot cards! It would be a really great deck for beginners too, because Barrett does such a wonderful job explaining the cards and they are so easy to interpret and connect with.