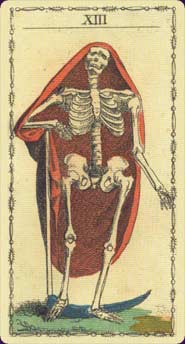 Another historical deck from Lo Scarabeo, the Ancient Tarots of Lombardy cards (also known as Tarocchi Neoclassico) were originally published in 1810. The majors and court cards are in a neoclassical artistic style, the minor arcana are pip cards.


Card Images from the Ancient Tarots of Lombardy 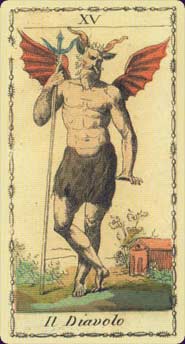 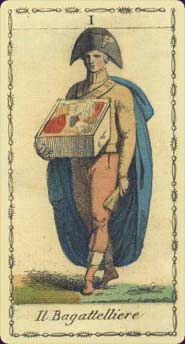 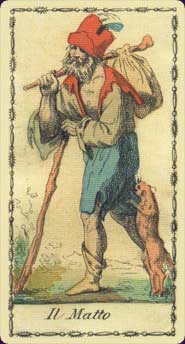 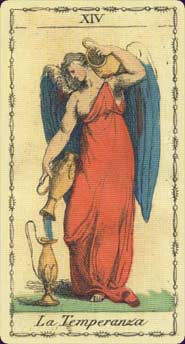 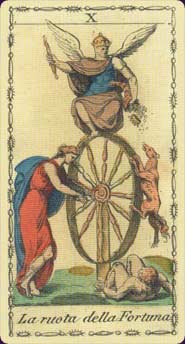 For those of us who find the Rider-Waite-Smith illustrated pip cards too forcing and confining, but who find the Marseilles deck aesthetically unpleasing, the Italian engraved "soprafino" decks make a good compromise. This is an interesting exemplar of the type.

Lombardy is a region in northern Italy; Milan and Bologna are the chief cities. This is, as far as we can tell, the home turf of the standard deck of Tarot cards, and it is interesting to speculate as to whether the variations present in the nineteenth century "Ancient" Tarot of Lombardy represent the preservation of earlier traditions.

The deck is older, and not quite as well-preserved as the Della Rocca "Classical Italian" Tarot. It was made for the publishing house of Ferdinando Gumppenberg in 1810, according to the leaflet. Some of the finer lines have become blurred in the intervening years, but the drawings of the characters are distinct and well made. There are some interesting graphical variants in the trumps that place this deck somewhere between the Marseilles style and the Swiss 1JJ deck. Lo Scarabeo's box text makes this deck out to have been drawn in a "neoclassical" style; it is true that many of the figures are bearded and toga'd, and the coins seem to feature Roman emperors.

The Pope and the Papess are still here, but Strength is once more Hercules or Samson wrestling a lion. On the Wheel of Fortune, Dame Fortuna reappears to turn the crank; the crowned fellow at the top is obviously human, as is the naked man at the bottom, but the ruler is pursued by a dog on the side of the wheel.

The Magician (Il Bagattelliere) is depicted as a travelling salesman, carrying around his wares in a tray, with a Napoleonic era bicorn cap. In the Lovers, a single woman is conversing with two male admirers. The Hermit looks down to confront a snake in his path. Temperance has three jugs, one on her shoulder, and she pours the water into one set on the ground. The Devil has lost his two supporters, and appears alone. On the Last Judgment, the risen dead seem to be rising from the flames.

But the only variation from the Marseilles canon that I consider to be a serious departure is in the Tower. The lightning stroke and the falling battlements have gone missing; the tower seems intact. This suggests that the artist here was drawing from the title (La Torre) rather than the Marseilles tradition.

The pip cards are attractive, even if they have no divinatory pictures and could be used for card playing as easily as divination. Refreshingly, the clubs and swords depict the appropriate number of discrete clubs or swords, rather than curved or straight lines to distinguish swords from rods as in the strict Marseilles tradition. Some of the Knights (Cavaliere) and some of the Pages (Fante) have their faces turned away from the viewer.

The supplied leaflet is worse than most. The discussion of the trumps renames the Magician as the Fool. You'll need a book if you make this your first deck.

If you are a Tarotist who has invested meaning into every pose and symbol of the Marseilles trumps, this deck does not give an adequate substitute for the canonical images; one of the later Italian tarots, that follow Marseilles much more closely, might be more suited to your needs. On the other hand, this deck has a subdued and indeed "neo-classical" visual appeal that is not quite as loud or twee as the Swiss 1JJ deck, and generally seems to take itself more seriously.

I like the Ancient Tarot of Lombardy because it is a quiet masterpiece. For me it is like a shelter in a storm, a safe haven to find refuge and a quiet sanctuary. Created in 1810 by Ferdinando Gumppemberg, it has a strong sense about it of the city of Milan in the region of Lombardy, Italy. It has an independent spirit, artistically by its understated neoclassical presentation, politically rebellious for its strong regional flair and flavour, and then as a Tarot of subtle force. Napoleon has since come and gone, but we feel his presence in the radical departure taken in this Tarot from the predominance of the Marseilles cards.

This quiet Tarot reminds me the courage and anger of Beethoven, and his rededication of the 3rd Symphony, the Buonaparte of 1803, as the Sinfonia Eroica in 1806. Lombardy suffered much during the turmoil, the physical restructuring of Europe, as a result of those times, but this Tarot stands up and says, we remain, the unvanquished. The elegance of many of the illustrations does not hinder the boldness and energy, there is an intellectual declaration of independence in its interpretations. And it is a brilliant Tarot, very much so, and in its own right. The minor cards forsake the geometric patterns of the Marseille, and simply present each set of symbols by showing them outright. Eight of this, or five of that, and yet the clarity is brilliant when reading. In the court cards, nothing is lost by merely allowing the images to create their impressions quietly, and the characters quite forcefully exert their particular meanings.

In his excellent review in these pages, Steve Gustafson has discussed many of the particular points of departure from the standard major arcana in this deck, so I would like to take advantage of his good researches, and simply give my overall impressions here. I hold these cards and I know the plain truth is in my hands. Tarot is not a history lesson or a museum tour. These cards are alive, and they contain the honest wisdom of the villages and towns, the cities and the countryside, that have been at the heart of Tarot from the beginning. If a young lover in the early 1800s wanted to seek advice they didn't go to the library, but to someone whose mysterious wisdom they could hope to trust. The local Tarot reader of their choice, a friend's grandmother perhaps, their aunt whom they'd always looked to for help. This beautiful Tarot holds the timeless and purifying magic of real people struggling through difficult times, and offers a gentle connection to something more ancient than the printing press or a pleasant trend in art. When the truth is spread out on the table, and intuition is the real issue, the confidence present in these majestic illustrations speaks for itself. I trust the Ancient Tarot of Lombardy, and it rewards my faith with abundant generosity.

The "Ancient Tarots of Lombardy" is a Marseille-style reproduction of a neoclassical deck created around 1810 by Ferdinando Gumppenberg, in the region of Milan, Italy. Gumppenberg was an engraver, which allows this deck to have a finer sense of detail than the wood block images of this time period. The original deck was printed from metal engraving plates and hand colored.

The cards are approximately 2 3/8" by 4 1/2", on sturdy, good quality card stock. The backs are ochre, with an overall pattern in brownish-red. It would not be possible to tell if a card had been drawn upright or reversed. The face of the cards has an ochre background, with a figurative border approximately 1/4" in from the edge. The Major Arcana show the card number in Roman numerals at the top of the card, in the middle. The card title is written in delicate script, in Italian, in the middle of the bottom of the card. The card of The Fool is unnumbered.

The Minor Arcana show suit symbols only, against a plain, colored background. There is no suit title, but the number appears in small type in the upper left hand and lower right hand corners of the card. The Ace of Coppes (Cups) shows the name of the illustrator (Gumppenberg), and the city the deck originated in (Milan). The Court cards show the title and suit across the bottom of the card, in delicate script, in Italian.

The Major Arcana are interesting, and largely traditional. Il Matto (The Fool) is seen as an older traveler, and his companion animal appears to be a cat. Il Bagatteliere (The Magician) is dressed somewhat like Napoleon, and appears to be carrying a chest with is "tools of the trade" in it. La Papessa holds a book in her lap, and has a veil behind her, but there are no pillars. Il Papa (The Hierophant) is shown seated, with a supplicant before him. Gli Amanti (The Lovers) shows one woman and two men - one of Royal class, and one that appears to be of the warrior class. La Forsa (Strength) shows a male figure with the lion. Death (which is not titled) is one of the most pleasant Death cards I have ever seen, with a skeleton standing, his right arm leaning on his scythe, and a red cloth hanging from the back of his head, forming a backdrop for the skeleton. La Torre (The Tower) shows an upright tower, top intact, with no lightening, no people falling, and no water. Il Guidizio (Judgment) shows a trumpeting angel above, with the figures below standing amidst flames of red fire.

There is no accompanying Little White Book (LWB). In its place are nine double sided cards, which give a simplified method of cartomancy (based on the meaning of the suits, with a Major Arcana card drawn in accompaniment), and upright only meanings for the Major Arcana, Minor Arcana, and Court cards. The cards are printed in Italian, German, English, Spanish and French.

I found this to be quite a gentle deck, and one that was easy to read with (which is saying something, because I do not generally read with a Marseilles style deck). This is a collectors deck, but it is also a deck that can be used by all levels of Tarot readers.