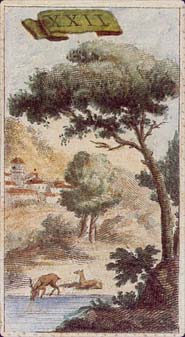 An early (eighteenth century) tarot deck with some unusual features. The Ancient Minchiate Etruria Tarot has 41 major arcana cards, which include astrological signs, the four virtues, and four elements, but not a high priestess/popess. 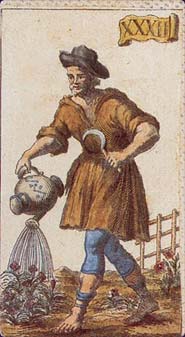 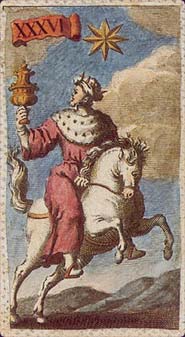 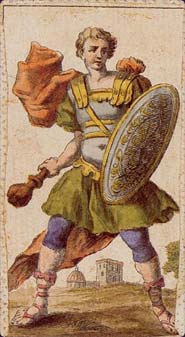 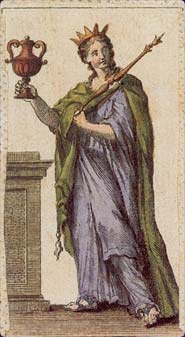 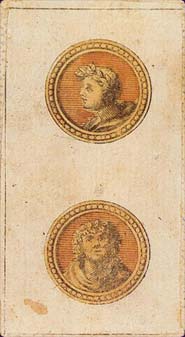 Minchiate is a Tarot expansion probably dating back to the sixteenth century, and thus arising about a hundred years later than the commonly accepted origin of Tarot in fifteenth century northern Italy. Minchiate differs from a typical Tarot in having 41 Major Arcana or trumps rather than 22. Like the Tarot, there are 56 Minor Arcana, making a total of 97 cards in the deck.

The Minchiate adds the remainder of the virtues, all the zodiacal signs, the four elements and the Grand Duke to the suit of trumps. The Emperor has been replaced by a Western Emperor and an Eastern Emperor. However, the Papess, Empress and Pope have been deleted - or as some would suggest - perhaps renamed. If reversals are used, Minchiate gives a resolution of 194 basic states, from which of course placement and intuition can lead one towards infinite depths of meaning. For those interested in further study of the Minchiate, the book accompanying the Brian Williams Minchiate Tarot has been highly recommended.

The Ancient Minchiate Etruria is a photo-reproduction of a Florentine deck dated 1725. The graphics are smooth, attractive and artistic: the originals themselves were etched and then hand-finished in watercolour. In this Lo Scarabeo publication, many of the cards seem to have cropped so as to lose part of the original content, which is obvious in that the numbered flags on the Majors are not always shown in full. It may be that in the source deck some of the cards were damaged near the edges. The back is a reproduction of the original, and technically it is non-reversible.

The cards are playing card sized, and although the deck is nineteen cards larger than a standard Tarot, I found it very easy to shuffle. Admittedly I do have long fingers - those with smaller hands might need to divide the deck into two for easier use. The cards are finished well, neither too glossy nor too rough. Several of the pip-type Minors have cute little flourishes on them, such as a monkey with a mirror, or a hedgehog encountering a smaller rodent. I enjoy this deck: it has a friendly, quirky, innocent and light-hearted feel.

As packaged by Lo Scarabeo, the cards were separated into three groups, each wrapped in cellophane. It was nice to see this care taken to protect the cards during shipping. However, much to my surprise, the cards within each of these groupings were in an almost random order, particularly frustrating for a deck which is significantly different from the Tarots most people are used to. To add to the perplexity, the enclosed foldout paper which lists the cards is worse than useless since it contains several errors. Contrary to the listing, this Minchiate does not contain either an Empress or a Hierophant; nor does it contain two Justice cards, but only one. Tom Tadfor Little lists the correct card assignments in his discussion of Tarot and Minchiate of Florence.

In using this deck for divination, I have found the Ancient Minchiate Etruria accurate and pleasantly eccentric, and surprisingly I have not felt any loss in the missing Papess (one of my favourite cards), Empress or Pope. There are several other cards which will manifest various aspects of these archetypes, including the astrological cards which add great richness to one's readings. Used as a meditational tool, the addition of the missing virtues, four elements and signs of the zodiac would make for a fascinating inner journey. Although not suitable for the beginner, this deck makes an engaging and stimulating addition to one's Tarot toolbox.

The "Ancient Minchiate Etruria" is a photo-reproduction of a Florentine deck dated 1725. It came to me in one of those "really good deals" that one falls into from time to time, and I glanced at the box, but waited over a month before opening it. I was both intrigued and dumbfounded by the phenomenal differences between this deck and a traditional Tarot deck.

The deck is comprised of a 40 card Major Arcana, 16 Court cards, and 40 Pips (numbered cards), for a total of 97 cards. The additions to the Major Arcana are the twelve signs of the zodiac, the four elements (earth, water, air, and fire), and the virtues Prudence, Faith, Hope, and Charity. Further differences include the deletion of the Papess, Empress, and Pope; the Emperor being replaced by the Western Emperor and the Eastern Emperor; and the addition of the Grand Duke.

There is no book per se with this deck, only the LWB (Little White Book) that accompanies it. The LWB has a major flaw, as it lists, for the most part, the traditional titles for the cards, rather than the Minchiate version. The comparison of titles from the LWB and the Minchiate titles is as follows:


There are further modifications in the Court cards and the Pips as well. As with the Majors, no number or title is given on any of the cards. From the LWB, the suits are given as Clubs, Chalices, Swords and Coins (which the LWB refers to as Pentacles). (An interesting note here is that the swords are depicted as straight, rather than the traditional - for this time period - curved sword.) The Pips (numbered cards) are depicted by icons only, with the occasional addition of an animal or a small figure at the top, middle or bottom of the card (as in the Two of Staves; the Three and Four of Chalices; the Four of Coins; and the Two through Six and Eight of Swords.)

The LWB is a "fold-out", reflecting the time in which it was printed (mid-1990's). It is text only (no scans), and lists only the upright meaning of the cards. For the Court cards, it also lists the "type" of person the card represents (i.e. Queen of Swords: A woman alone, or widowed, with a difficult character; Melancholy; Sterile; Falseness.

The first page of the LWB is entitled "Fortune Telling With The Florentine Minchiate". It indicates that this system is used to respond to simple questions regarding specific areas of life. The Major and Minor Arcana are separated, with the Minor Arcana being shuffled first - specifically, shuffled seven times. The client then cuts the deck. This is repeated three times, then four cards are drawn and placed in the form of a cross, moving from left to right. Card number one represents the past, card number two represents the present, card number three represents forthcoming changes, and card number four represents the future.

The cards themselves are small - approximately 2 3/8" by 4 1/4", and of quality, glossy card stock. With small hands, I love working with this deck (all 97 cards!). The backs, done in a light color, show a female figure standing, with the word "Etruria" underneath, making it possible to tell if the card had been drawn upright or reversed. There is a light colored, patterned border to the backs.

The card faces have a smaller version of the border that appears on the back of the cards. The background of the cards is a light (cream looking) color, with the drawings showing subdued color. The style and feeling is very "old world mythological", and strangely comforting. One feels as if they have stepped back in time, into another world.

I find this to be a very worthy deck, albeit not one that beginners would be interested in. For those who have a good basic understanding of the Tarot, and of its astrological attributions, or for those who are simply interested in the history of Tarot, and in older decks, this is a powerful deck.

The addition of the astrological signs, and the four virtues, adds not only depth to a reading, but opens up wonderful avenues for personal study, meditation and journeying. I was not happy with the lack of companion book for this deck, and took out the late Brian William's "The Minchiate Tarot" for a refresher course. He goes into such wonderful depth on the Minchiate system, and on the artwork, that his work truly opens up the "Ancient Minchiate Etruria" deck. I referenced his book, as well as using both decks in a comparative style reading, which really brought me to a greater appreciation of both decks. (Williams "The Minchiate Tarot" is an updated version of the Minchiate style, done with clean line drawings and graceful coloring. His cards also carry the card Title (in English and Italian), and the card number (for the Major Arcana), with the number and the suit (for the Minor Arcana).