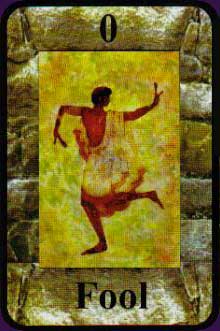 The Ancient Mysteries Tarot links Tarot with its ancient roots. The major arcana cards are based on sacred temple art from the mystery schools of Egypt, Greece, Mesopotamia and India, while images of megaliths, sacred fountains and stone temples are used to portray the four sacred elements in the minor arcana. 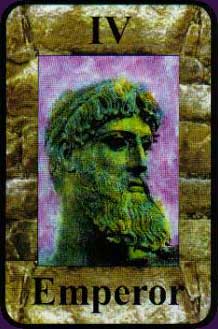 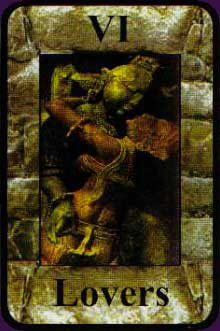 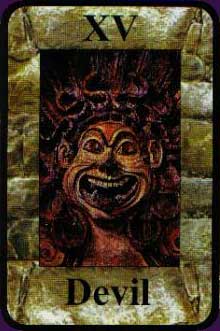 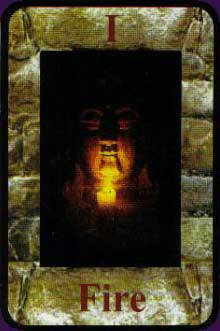 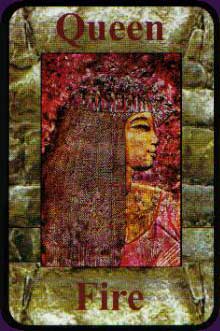 The Ancient Mysteries Tarot is quite an interesting deck. I would advise purchasing the book and deck together, as the deck alone, while certainly usable, does little to take the reader to the depth of the cards. For the images on the Major Arcana, Calverley has referenced the ancient mystery schools of Egypt, Greece, Mesopotamia and India. The images for the Minor Arcana use a background of megaliths, sacred fountains and stone temples.

The LWB (Little White Book) that accompanies the deck got a grumble from me to start with. It is not presented as a booklet, but is a single long sheet of paper, nicely folded. There is no information about the author or the background of the deck on this sheet. There is the requisite publication information, along with three paragraphs on how to use the cards.

These three short paragraphs are quite magickal - in that they open up the Tarot from the very beginning! In his first sentence, Calverley notes that each card can be used as a question, as well as an answer. How he does this is to follow the nature of the elemental qualities of the cards: Fire cards refer to will and creativity; Air cards refer to the intellect; Water cards refer to feelings and relationship issues; Stone (Earth) cards refer to the practical side of life and material issues. He goes on to state that the Major Arcana represent both destiny and spirit. (No note is given on the Pips, or the Court Cards).

Using his process, one card is drawn to determine the nature of the question. Calverley attributes five possible levels of meaning to each card: Spirit, Fire (will and energy), Water (emotional), Air (mind) and Earth (physical). Drawing a second card lets the reader know which level of meaning is most in effect at the time of the reading.

The remainder of the LWB lists keywords for each card - one keyword for each level of meaning, in the following order: Spirit, Fire, Air, Water and Earth. From the LWB:

Five of Water: A Correction; A Challenge; Regret, Endings; Emotions re: Loss or Broken Relationship; A Dislocation

The deck itself is approximately 3 1/8" by 4 3/4" - able to be used by those with smaller hands reasonably well. The cards are good quality, glossy card stock, and will stand up well under use. The backs have a slim black border surrounding a golden inset. The inset shows a graphic that is reflected from side to side, and end to end, so that a card in the reverse position would not be evident.

The face of the card shows the same slim black border, surrounding a wider border that is reflective of stone - and the ancient origin of the graphics for this deck. Centered in each card is a 2" by 3" insert with the imagery for that card. The card number appears at the top of the card, with the suit (for the Pips) or the title (for the Major Arcana) along the bottom. The Court Cards show the title along the top and the suit along the bottom.

Once I started working with this deck, I found it to be quite vibrant. (This tells me that I need to get out of my own way sometimes and just accept what is there!) One of my favorite cards is the Devil, who appears as a mask like face with mouth wide open and Medusa-like hair. This is a thought provoking, rather than a fearsome image.

Another image that caught my attention was the Page of Earth, which shows a face that appears to be cut into stone. I loved all of the Fire cards - the candles in each card are presented as a golden yellow, with bright white flames in front of a darker background. The Seven of Fire shows seven candles in front of a stone face. The Three of Fire follows the same concept, with three candles in front of a stone face that is in partial shadow. the King of Fire is an extraordinary card - showing what appears to be the head of a Pharaoh, in shadow, surrounded by Egyptian relics.

The Air suit images, while certainly appropriate, are repetitive - windows cut into stone walls, with the sky showing in back of them. The feeling here, at least for me, was stronger on the stones (which are an earth centered image) than the air that is supposed to be represented.

The suit of Earth shows imagery that is also repetitive, but strongly centered on the representative element of stone, so it does work well. The same goes for the suit of Water, which shows images of waterfalls over stone.

There are other marvelous images: the Wheel, which shows a seated God with a pentacle superimposed over it; Justice shows a golden, warrior like image; the Fool shows a joyous dancing figure. There is a slight discrepancy involving Judgment. In the LWB, the card is referred to as Judgment. On the card itself, the title is Prophecy.

I enjoyed working with this deck, which I feel can be used for any type of reading, or for meditation or ritual/ceremonial purposes. I also feel that the deck is appropriate for any level of Tarot student/practitioner. As with all decks, study the cards first to make sure that you are going to be able to work with the imagery - to make sure that the deck resonates with you. And I do recommend purchasing the deck and the book together.