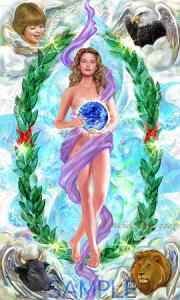 A strongly coloured, very pretty recreation of the Rider-Waite tarot scenes. The Angel Tarot cards are reasonably lifelike and have a slight Disney feel. Now available in a laminated, limited-edition version.


Card Images from the Angel Tarot 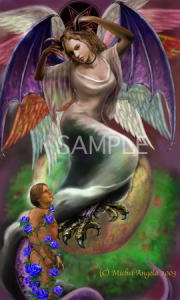 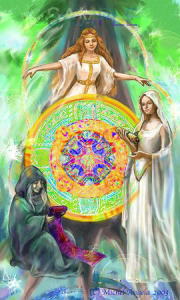 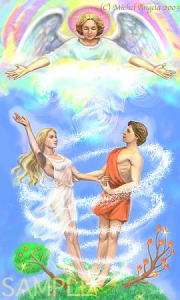 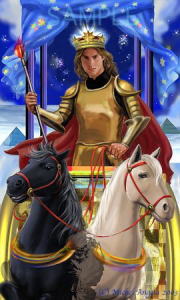 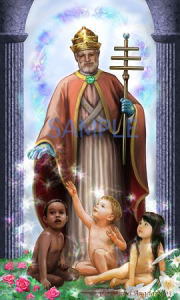 This deck contains the Major Arcana only. The 22 cards have traditional titles but in Italian. In a nod to the Tarot of Marseille, the 5th card is Il Papa (Pope) instead of Hierophant. Generally, the main Tarot influence is the Rider-Waite, but this is definitely not a clone.

Maria Miduki is part-Italian and part-Japanese, and her mixed heritage is reflected in her deck. As I have said, the titles are in Italian. The figures in most cards are of European appearance. The Devil card (Il Diavolo) goes one step further and embodies influence from Italian art. The devil is a beautiful woman. She does have little devil-horns and rather terrifying talons where her feet should be, but she is beautiful. This motif is found in the many Renaissance paintings entitled The Temptation of St. Anthony. In this case, the Devil actually has the wings of an angel! As for the man on the card, he has no intention of resisting temptation, the garland of vivid blue roses underlining the fact that he is already entangled. The Tower, on the other hand, shows Japanese influence. It is constructed not with stone or brick but with those delicate, ornamental Japanese bowls that stack one into another. In another departure from tradition, this tower of bowls is built on the Earth's surface and stretches out into Space.

Another artistic influence on the deck is that of Disney. The card that shows this most clearly is La Stella (Star), in which Disney's Little Mermaid holds the two jugs. In a more general sense, many of the cards contain bright colours and sparkly effects. Il Giudizio (Judgment) shows an angel whose wings are pink with rainbow highlights, whilst a huge rainbow-coloured and sparkling lemniscate in La Forza (Strength) embraces both woman and lion. I am not a great Disney fan but I must say these touches give the cards a rather fun feel.

Traditional and modern elements meet perhaps most strikingly in Il Papa (Pope). The Pope himself looks like a Pope, in full regalia. Usually I run away from such images. What saves this card is the three children at the Pope's feet. One is black, one is Caucasian, one is from an Oriental background, and they look very natural. The only thing I have some reservations about in this deck is the depiction of women. They are uniformly young and slim with long legs and perfect complexions. Even the Crone on the Wheel card has perfect skin without a sign of wrinkles. I would have liked to see a greater variation of body-shapes. But then, the only nudity displayed is by the children on the Pope card - is anyone goiung to be offended by this?

These cards could be used easily in a reading by anyone who knows Rider-Waite and/or decks based on Rider-Waite.But if you don't like Rider-Waite being tampered with in any way, this deck will not be for you. If you dislike sparkliness in any form, ditto. If, on the other hand, you fancy a change that is not a radical departure, this may be a good choice. A beginner could use this deck effectively.