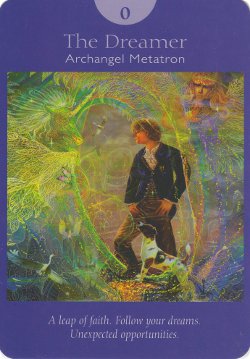 The Angel Tarot Cards is the first tarot from the very popular creator of oracle decks, Doreen Virtue. It's a full set of 78 cards with images of angels, mermaids, unicorns and fairies, designed to be '100 percent gentle, safe, and trustworthy'. It's a simple and very easy to use introduction to tarot cards. 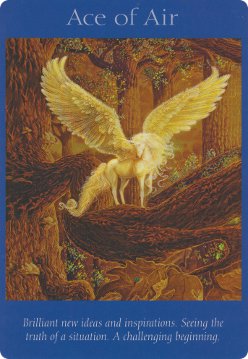 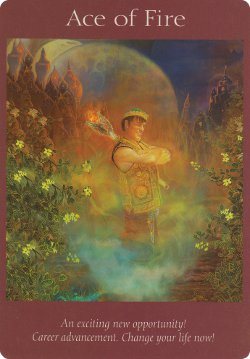 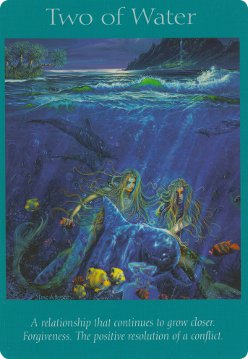 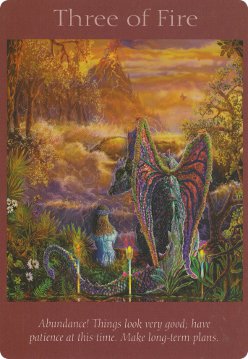 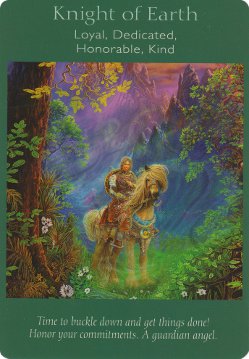 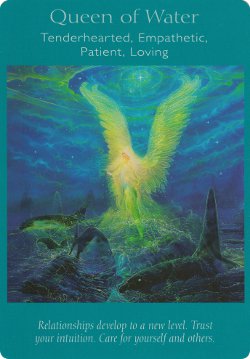 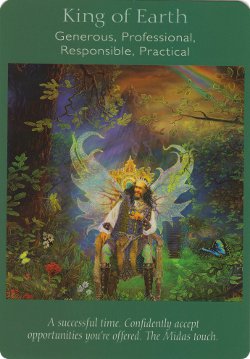 Although called a tarot deck, this Angel Tarot looks and handles more like an oracle deck. The cards are large (3 ˝ x 5 inches) and the card stock is robust, but also glossy and slippery. All these factors can make it a challenging deck to shuffle. It comes in a sturdy and colorful box that should last for quite a while. The backs feature an image of Archangel Michael, and are non-reversible. Going by the packaging and overall effect, the theme color of this deck is blue. Silver edging adds a distinctive touch.

A 135-page book fits in the box with the cards. It gives a brief intro and how-to, two spread suggestions, a small B&W picture of each card and a 2-3-para interpretation. Overall the book is useful, or at least worth reading through. It certainly gives enough to get a beginner on track. Although no reversed meanings are specifically given, one could draw both positive and negative interpretations from what is there.

The Major Arcana roughly follows the RWS tradition, with several title variations. The Fool is titled “The Dreamer”; the Hierophant, “Unity”; the Wheel of Fortune, simply “The Wheel”; the Hanged Man, “Awakening”; Death is “Release”; Temperance is “Balance”; the Devil is called “Ego”; the Tower becomes “Life Experience” and Judgment is “Renewal.”

In her little blue book, Doreen Virtue has softened the severity of some cards. For example, she interprets the fifteenth card, Ego, as a false sense of entrapment and over-focus on material life. The sixteenth card, Life Experience, is described as a wake-up call, “a moment both of freedom and awakening.” Whether you like these changes of title and interpretation is of course an individual matter.

Each Major Arcana card depicts a corresponding Archangel, with some double-up attributions (eg, Archangel Michael shows on three cards: the Emperor, the Wheel and the World. Gabriel represents both the Empress and Awakening). For those who aren’t familiar with their roles, a brief introduction to each Archangel follows the interpretations given in the book.

The top of every Court card gives a few words about the person it represents. I find these keywords trite and stereotypical, hardly doing justice to the possible richness within each person, so I ignore them. Throughout the entire deck there is a also 2-3 line interpretation at the bottom of each card, perhaps useful as a prompt for deeper analysis. Beginners will appreciate this; experienced readers may find it annoying. For me, some of these two-liners offered ideas I’d never thought of before.

For Minor suit titles, the deck’s creators have used the traditional elemental attributions Fire, Water, Air and Earth, de-emphasizing the symbolic tools. You’ll still see plenty of the latter in the card images, though in the Air suit the swords are mostly replaced by unicorn horns.

Yes, you read it right, unicorns. Not only that but fairies feature in the Earth suit; dragons in Fire; mermaids, whales and dolphins in Water. All these in an angel tarot, you may ask? Some may love these inclusions; others might feel that in combining angelic and mythical representations, Doreen Virtue has packed too much into one deck.

While the card images aren’t exactly borderless, they are framed by flat colors to distinguish each suit. The Major Arcana is bordered by purple, Wands by russet, Cups by aqua, Air by blue and Earth by green. This scheme adds to the overall colorfulness—which gets me on to the next point.

The drawcard (excuse the pun) of this deck has to be the artwork. Steve A Roberts has done an admirable job of creating lush and fantastical landscapes, taking the viewer to what looks like an exotic tropical planet. I find some face renderings a little disappointing (eg. the angel in the Lovers; the mer-people in the Ten of Water), and that the oceans in the Water suit all seem to be the same shade of blue, but this is quibbling. While the artist has reused backdrops here and there (eg. Eight and Nine of Earth), for me this didn’t detract.

At first I worried that the visual lushness would overwhelm this deck’s readability, but so far I find it remarkably accurate. Sometimes I miss the more explicit symbolic details given in (say) the RWS deck, but nevertheless this one works for me.

After a few months of fussing and fuming about the disingenuous promotions Hay House has used for the new Doreen Virtue Angel Tarot Cards, I am finally holding the deck in my hands. No, I didn’t break down and make the purchase. However, I do believe the Doreen Virtue Angel Tarot is a legitimate contribution to the tarot corpus, and I am glad a friend lent me her copy so I could give it a legitimate review.

Angel Tarot Cards (yes, that is the official title) looks like a typical Doreen Virtue oracle. It is oversized, printed on very sturdy stock and packaged in a lovely box with a small but substantial booklet. Because of their size and sturdiness, the cards are a bit hard to handle, but lovely to behold.

The deck is a standard 78 card tarot deck in many respects. The artwork is gorgeous, but there are few visual clues in each picture about what the card might actually mean. Never fear, there are interpretations written on each card. There is no need to actually intuit or study anything. This is a boon for new tarot readers, or for those who want to use the deck as a simple, easy oracle.

I like many of the written interpretations on the cards and in the booklet. Virtue and I agree that every tarot card can have an uplifting meaning. The punctuation on some of the interpretations summons my inner grammar police. The interpretations are a mishmash of full sentences and key words, but each thought is punctuated with a full stop. Apparently angels find no need for complete sentences or proper punctuation. We can’t really blame the deck designers for this; many other oracle creators are guilty of the same lazy crime against the English language.

In this deck, Justice is card eight, and Strength is card eleven. The Fool has been renamed as “The Dreamer.” Major Arcana five (Hierophant) is called “Unity,” twelve (Hanged Man) is called “Awakening,” thirteen (Death) is “Release,” fourteen (Temperance) is “Balance,” fifteen (Devil) is “Ego”, sixteen (Tower) is “Life Experience” and twenty (Judgment) is “Renewal.” The rest retain their traditional names.

I am comfortable with changing the traditional names of Major Arcana cards. In the five hundred year history of tarot some have already been changed. The Hierophant was once the Pope, for instance. I like Lisa Hunt’s replacement of “Chains” for the Devil, and Eileen Connolly’s “Transition” for Death.

I think Virtue’s “Release” for Death is brilliant. I also like “Ego” for the Devil. I think “Life Experience” for the Tower is shallow, and “Unity” for the Hierophant is simply wishful thinking.

The assignment of an archangel for each Major Arcana is very interesting, and will be helpful to those who work with archangels, or want to learn more about them. Following in the footsteps of Kris Waldherr and some other modern tarot designers, this is a great example of what I like to call “archetypal assignment tarot.” The question is, how well do the archangel choices reflect the standard Major Arcana archetypes?

The “Unity” card (Hierophant), is represented by Archangel Sandalphon. Sandalphon is one of the few archangels who was once a mortal man. This makes sense for the “Pope” archetype of Major Arcana five. The Pope is a mortal man who is also God, or God’s representative on Earth. Sandalphon’s responsibilities include prayers, personal ascension and Earth. To me, this seems like a very good fit.

The High Priestess is represented by Archangel Haniel. Haniel is feminine, and associated with grace, intuitive development, and finding our divine essence. Again, this seems a perfect fit.

After studying the archangels and the Major Arcana cards with which they are assigned, I feel the designers of this deck really did their homework. One problem with archetypal assignment decks is the assignments sometimes feel forced. In Angel Tarot Cards, the assignments make sense, and feel natural.

My only real complaint with the Major Arcana in this deck is the loss of the “Fool’s Journey.” I would be fine with the “Dreamer’s Journey.” But here, there is no journey at all. Instead, there are simply twenty-two archangels, each with a beautiful picture, a strong archetypal association and a powerful message. For many, this will be enough.

For me, the concept of card zero (Fool or Dreamer) as the star of the show and the representation of each of us on our journey through life is critical to developing a full archetypal and allegorical understanding of tarot.

The Court of the Minor Arcana is quite traditional, with ranks of Page, Knight, Queen and King. The interpretations include the possibility of the cards representing people, energies or predictions.

I have a problem with mixing archangels with unicorns, mermaids, dragons and faeries, especially since Virtue has made a living of presenting the angels as actual beings rather than mythological beings. Does this mean she thinks unicorns and mermaids are actual beings as well? Many people do, but for me this demotes the archangels to mere mythical beasts.

Clearly, Angel Tarot Cards would not be my first choice for a personal or professional tarot deck. However, the artwork and deck quality are stunning. The deck honors tarot tradition in many ways, and will be a great tool for folks who want to learn tarot, or who want to learn about the archangels. It is evident that a great deal of work went into producing this deck. That work has resulting in a strong tarot deck that many people will cherish and enjoy. Angel Tarot Cards is a valuable offering to the tarot community, and may serve to bring new tarot enthusiasts into our community.