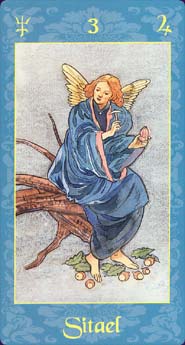 A pretty, tidy 80-card oracle based on the traditional Christian guardian angels and archangels. The Angel Voices Oracle also incorporates astrological associations, shown by the colour-coding of the angels' backgrounds and clothing. 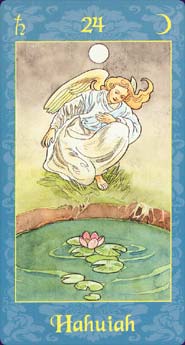 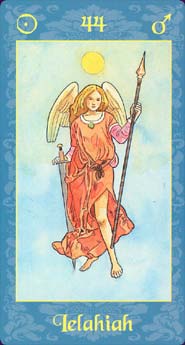 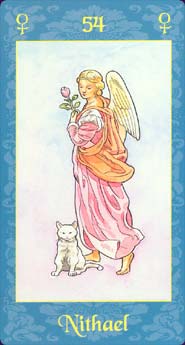 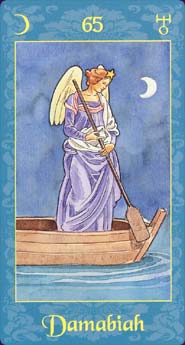 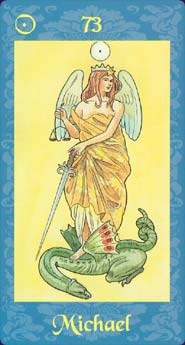 The Angel Voices Oracle is an 80-card, non-tarot deck of angels and archangels with an element of astrology. Described on the box as the "celestial choir, the harmony of the world, timeless angels, who, in the name of the Eternal, watch over human happenings", the concept is by Laura Tuan and the artwork the creation of Antonella Castelli (who also illustrated the Tarot Art Nouveau and the Spirit of Flowers Tarot).

The angels featured in this deck follow the complicated structure described in Gnostic and medieval Christian texts, where there are 72 guardian angels divided into nine 'choirs' of eight angels each.


Then there are the seven archangels - Michael, Gabriel, Raphael, Anael, Ariel, Zachariel and Cassiel. The deck also has one untitled card that represents "the great celestial palace with all of its floors".

Visually, the cards have blue watermarked borders and are numbered 1 to 80. Each card has its number, the Hebrew name of the angel, and planetary symbols for its 'formation' and its individual planet in yellow script. The cards are collectively called 'Arcana' and are very similar in general design, all featuring serene angels floating in the centre of the background.

The angels are on the whole young and lovely, with a very human appearance and only a single pair of wings. They are differentiated by the background, the colour of their robes (both of these are a symbol of their planetary association), and the instruments, flowers and gems that correspond to their aspect. My favourite card is 44, Ielahiah, shown with spear and sword against a sunny, clear sky. (She represents will and courage and is said to be concerned with interpersonal relationships.)

Inside the companion book, Angel Voices, each card is explained in two pages of text, containing its name, keyword, areas concerned, gifts, divinatory significance, relevant time period, and a number of 'guided' interpretations. These are specific, short divinatory meanings corresponding to each position in two simple seven and three card spreads. (These spreads are explained in the first chapter of the book and one is intended for general questions, one for specific questions.)

The Angel Voices Oracle isn't groundbreaking in theme or execution, but it is a tidy, simplified divinatory deck, suitable for those with a Christian background or who resonate with the guardian angel concept and like a tarot-sized oracle deck.

I was at the point when I was so desperate to get the Angel Voices that I was willing to order it from the internet even if it was expensive and that I know for a fact that there are only a few sites which deliver internationally. At the point of giving up, I came across a small bookshop in an area of a mall which I rarely visit. I went in and asked if they sold tarot cards and what I saw was that they only had the beginners deck. I didn't feel the connection, instincts told me though to ask the person behind the counter if they have the Oracle that I was looking for, I was holding my breath when the representative phoned the stock area and inquired if they indeed have one in stock, to my relief and surprise, they did have it.

They only have the Deck though, not the Oracle set, I figured it's better to have the deck than not to have it at all. I've searched for it for two months and I am not to pass the chance to lay my hands and feast my eyes on the deck.

Now I truly believe that this one is really meant to be my first deck. I wouldn't be this happy had I bought the Sacred Circle first than the Angel Voices.

Another reason why I love this deck is because of my special connection with angels. Another reason is because of the artistry, it shows a more human form of the angels, beautiful, serene, and a face that matches the descriptions and the keywords used in divination.

One thing though, it is not suited for beginners, it does not have the usual suits and cards like Death, The Lovers; it only has the name of the angel and the planet which corresponds to the hierarchy the angels belong to. If you are the type of person who trusts their instincts, intuition, this one is for you. You will learn how to read the cards not by looking at it, but by listening to the soft whispers of the angels who appear in your spread. I fell in love with this deck even more after I did my first reading for a friend of mine. I was surprised when he told me that I read him like an open book. It was a feel good moment and the belief that I had just got stronger. I know it is for me.

Lastly, after a couple of readings, I developed a special name for it, I fondly call it, the Guiding Deck. This showed me a path for guidance, things that should be developed and things and habits that should be changed are reflected by the card. This is useful when the person asking for helped is being troubled by something.

After a month of using the deck, I then bought my second one, the Sacred Circle Tarot (it's a different story, reserved for next time). But believe me when I say that no tool is meant for a lot of different tasks. A new reader with two sets, let me just proudly say that they both work for me and for the task that I am asking them for help with.

Aeclectic Tarot, thanks for helping me find my decks and for opening the doors wider for me, to make me see the beauty and the spirituality of Tarot.