Tarot of the Animal Lords 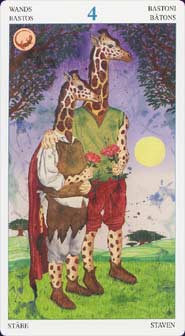 Featuring human figures with the heads of anthropomorphised animals, the Tarot of the Animal Lords cards are more charming than they sound. The animals chosen are from all over the world and include African elephants, European badgers, Australian, sea horses, birds, even a few insects.


Card Images from the Tarot of the Animal Lords 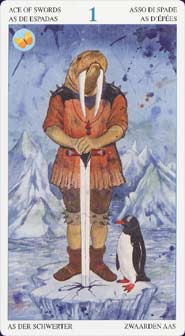 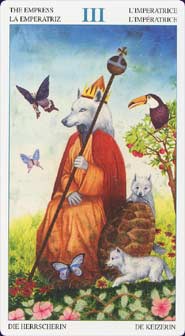 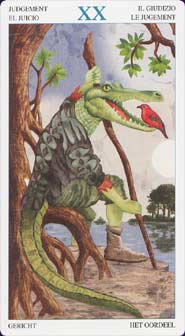 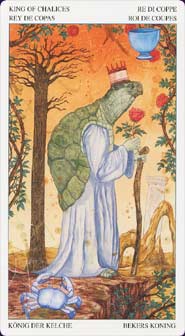 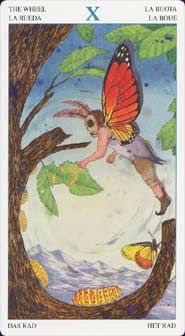 Tarot of the Animal Lords Review by Solandia

The Lords in this, the Tarot of the Animal Lords from Lo Scarabeo, are anthropomorphic figures with an animal head on a human body. Featuring insects, birds, and wild animals of the world - tigers, lynxes, elephants, koalas, birds, walruses, and a few domesticated animal (cat, rooster, ram and goat) all are ably drawn by Italian artist Angelo Giannini.

The minor arcana suit emblems have been altered, and rather than Swords, Wands, Chalices and Pentacles, these are now Butterflies, Salamanders, Crabs and Beetles. The major arcana are linked with animals as follows:


The merging between human and animal well executed on the majority of cards, keeping the character and look of the animal, but translating it to a human stance and situation with charm and realism (as much realism as is possible for a deck set in a fairy-tale universe filled with half-animal, half-human creatures!).

There are so many beautiful and highly appropriate cards worth mentioning – the kindly and compassionate sage that is the Tortoise in the King of Cups; the beaver on the Tower card, suddenly flung into the water when his log-dam collapses; Flamingo and Temperance, long-necked and elegant. The two snakes on the Seven of Swords, conferring in whispers. Judgement is a crocodile, linking with Egyptian mythology. And the Six of Wands, with three roosters strutting and blowing trumpets. There is, however, one exception: the Koala on the Queen of Wands. It’s not the best artistic rendition of a koala, and its dress is somewhat disconcerting. (Koalas are stocky, grumpy, and ungodly noisy creatures, and this one is a slim figure dressed in a low-cut blouse and harem pants.)

The meaning of the cards, as given in the little white booklet, do not really stray from the norm, but there is one significant difference. All cards have positive meanings when upright, and negative meanings only apply if reversed. Reversals would need to be used for a full-spectrum of meaning, as cards that are traditionally darker – Three of Swords, Five of Pentacles, Ten of Swords – all have a positive spin and only have negative connotations when upside down.

The Tarot of the Animal Lords combines the animal’s strength and qualities with the Tarot archetype for a simple – yet detailed and very pretty – set of cards with a whimsical, positive energy.


Complete Details of Tarot of the Animal Lords


Similar Decks to Tarot of the Animal Lords