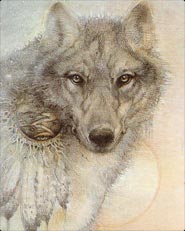 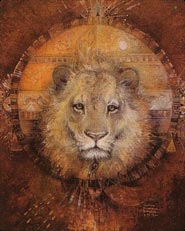 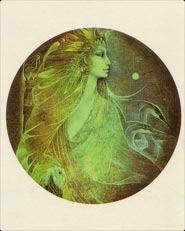 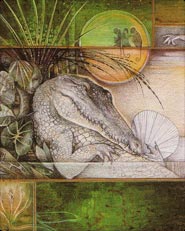 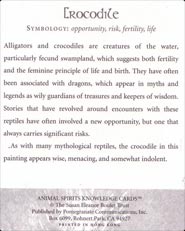 This is another wonderful deck by well known artist and author Susan Seddon Boulet - she will be missed greatly - born in Brazil to English parents in 1947 and migrated to America, she passed away in her Oakland, California home in 1997.

These forty-eight cards are from a collection of her paintings of animal spirit beings. They are magickal, mystifying creatures often part animal and part human. To the ancients, all things in nature had spiritual and sacred meaning. In dream like images you can feel the power of their magick. These fantastical creatures were exceedingly powerful, they are beings that are the spirit guides who lead the departed to the next life, they restore balance and harmony to a troubled world, they heal the sick. Tribal leaders knew the animal spirits very well, and they would journey beyond the ordinary reality to invoke their power.

The deck is designed for meditations and learning rather than divination. Susan Seddon Boulet is also the artist for the Ancient Egyptian deck, and the Goddesses Knowledge Cards which are part of the Knowledge card series, though the Animal Spirits Knowledge Cards were published posthumously. These cards follow the same organizational structure as the Goddess Knowledge Cards, the image on one side and the title, symbology, keywords and a short description of the animal in myth and nature on the other side. (The Eagle, as an example, keywords listed are power, creation, illumination, and exploration, can't you just see it soaring above?)

The art is of course outstanding, and with sad thought there will be no more except what is out there of Susan Seddon Boulets work. The cards are an excellent tool to work with your power animals. The animals have mythical qualities which there are two cards that I find interesting and like very much. Totem, it is a comforting image of huge winged animal totem, large and protective, it embraces a Native American and Animal Deities which shows a pantheon of animal spirits. The other is the image of the Sea Horse, shapeshifting with a pregnant sylph to form a beautiful image of water magick. Among others I like the shapeshifting of the Horse and Butterfly and Coyote that are similarly merged.

Boulet has the myths and gods, as in the Goddess Knowledge Cards, from the myriad of cultures. Cat: the history goes from the Egyptian Goddess Bast to Greek Artemis and Roman Diana. The Elephant: Hindu God and Ganesha. All the well known totem animals from Native America are present, like the Eagle, Bear, Coyote, Spider, and Wolf. There is also the Monkey and Crocodile from other cultures.

A list of the forty-eight animal cards as follows:


These cards are powerful, and again is one to have for your collection of Susan Seddon Boulet beautiful painting made into a useful tool for all to use.

As the other reviewer said, these cards are gorgeous. This is the kind of art you can get lost in, noticing one detail after another. There's this ethereal depth to it that reaches you beyond just pretty pictures. Honestly, I could spend this whole review being blown away by the art, but that's not what I want to do here. No deck is perfect, and in using this one, I have encountered a few things that bother me - it might be nitpicking to some, but I feel like it needs to be said.

First off, the cards have that notorious waxy coating that makes them difficult to shuffle. The cards are also on the thin side, and when you do shuffle, they sometimes stick to each other.

Lastly, there are just a few cards that have the words on the back printed crooked. This might just be my deck, and it's not super crooked, but it's enough that I noticed.

As mentioned by the other reviewer, they are not particularly suited for "reading" but rather spiritual advice or meditation. The animals depicted are mostly hoofed animals, big cats and birds. I am a bit disappointed in the lack of reptiles (Only the Snake and Crocodile were included).

All that being said, the cards are beautiful, complex, and spiritually engaging. I'm glad I have them.