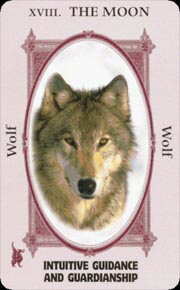 There is not a human image in the Animal Wise Tarot. Each card has a centred photograph of an individual animal in a natural setting. The border is wide, pink and decorative and contains a phrase conveying the meaning of the card. The suits have been renamed to Ancients, Winged Ones, Four-Leggeds and Shapeshifters. 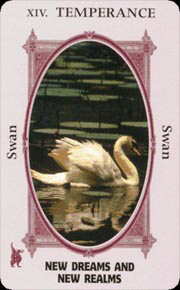 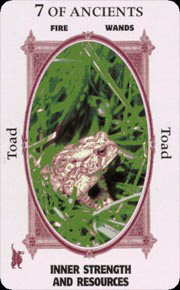 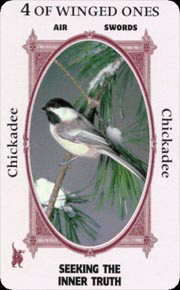 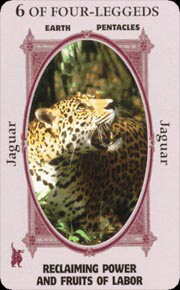 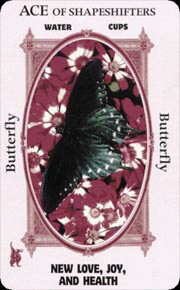 I have been reading tarot informally for about 13 years and went professional 3 years ago. I use several decks, depending on the situation, but often pick up Ted Andrews ANIMAL WISE TAROT, especially with newcomers who are looking for a positive message. I had begun reading intuitively before I studied the tarot so when I first acquired the deck, I could not use it because I did not understand the Tarot. Neither could I memorize what all the animals meant so I put the deck away. That was before I trusted the intuitive reading I did. After having studied the tarot (and continuing to study it) and having passed a certification test, I took out the deck again. Perhaps it was the knowledge of tarot or the trusting of my intuitive self, but suddenly the deck made sense to me.

The animals came alive and to me seemed to fit appropriately with each card. I found myself focusing on a particular attribute of the animal pictured on the card and seeing how it related to its position in the card spread and the reading in general. I also use the deck in conjunction with Animal Guide Readings I do for people, involving mediumship and calling animals to bring messages rather than angels or relatives.

This deck's outstanding attribute is its positivity. Even those cards which are sometimes regarded by laymen as bad cards - the Devil, the Tower, 10 of Swords - have a positive outlook. I have created a special eleven card spread with this deck which brings out whatever message is needed in very positive terms. Although all the animals depicted are photographs, none of the animals appear fierce or frightening. Even the Turkey Vulture (Death) looks more interesting than frightening and seems appropriate as it feeds off carrion, transforming dead meat into living tissue for its sustenance and cleaning up the environment in the process.

Because of the positive slant of the cards in the deck I also made a conscious decision not to use reversals with this deck. (I do reversals with my other decks). The intent of the message, be it gentle or intensive remains in what I is see in the particular animal in a given spread. Sometimes it is the gentleness with which the cougar may be picking its way through the woods; other times it may be the fierceness of the jaguar which dominates the spread. The animals pictured on the cards, together with the tarot structure, triggers the intuitive understanding the client seems to be looking for. The depth in the cards interpretation can be as simple as the key words or as in depth as the complexities of the pictured animal.

It has also been my experience that a client who selects this deck is usually in need of reconnecting with the natural world. Often times they admit to garnering their strength from taking walks or gardening or other such outdoor activities. This deck seems to help these people realize intrinsically their own need to reconnect to the Earth energies in their own unique manner.

Normally I prefer to avoid tarot decks that have key words printed on the cards and usually do not recommend them to newcomers. Sometimes those words are very much related to the authors specific interpretation of the cards and can be misleading to the client or contrary to the intuitive message I receive. Sometimes key words actually stunt my own language flow with the the intuitive reading. In those cases I try to fall back on my knowledge of language and explain the card in several different ways (I am a retired high school English teacher.). However, with Ted Andrews deck, the words flow into a positive meaning, even when major change is indicated. It provides a simple and straightforward tool that helps the querent understand what I am reading from the cards. Sometimes I even ignore the key words altogether and a querent will draw my attention to them. In these cases I have found that I have said in different words the same message as is on the card!

I would not recommend this deck to newcomers unless the individual has a strong intuitive tie to the animal kingdom. However for any animal lover, this deck can be a unique expression of the reader and the tarot working at their best.

Ted Andrews has created another way of looking at the animals. The tarot deck and book set is published by Andrews own Dragonhawk Publishing. The concept is somewhat Shamanistic in nature, but this is a true tarot deck. The photographic images of animals in their real life setting grace each card. It must have taken a long time to get 78 photos of all the animals.

This Tarot deck comes in a deck set with 78 cards and book. Which I recommend one to get the set. The design is simple, all 78 cards are a pale lilac color with a darker reddish purple ink design on them. Each photograph is centered with in oval shaped cameo of an animal in its natural setting. Titles appear in black in the tops and bottom borders of the cards with the animal names in the side borders on both sides of the photo. Each card contains keynotes of several words that describe the basic lesson and meaning of that animal and its tarot significance. The design is simple but excellent. Which makes it easier to concentrate on what the card is really about. The back design bears the logo for DragonHawk Publishing, in an attractive three-layer effect. It is a solid light lavender with on the lower left corner is three superimposed griffins facing right, in various shades of lavender and size.

A deck I find that is mainly for ones self study although it follows the traditional tarot, and can be used to read others who need to touch base with nature.

The book has 246 pages with illustrations. I know the back of the book says 256, this is the table of contents etc. The book describes each card in detail, and does include reversed readings but I do not use this in a reading. There are suggested layouts, the single card a daily indicator, the three card Yes/No and the traditional Celtic Cross layout also the five card layout Four Directions. There is a round 14 card Yearly Forecast layout also. And a chapter on becoming a Psychic counselor as well as what to look for in a psychic counselor, a quick reference appendix to the 78 cards.

Reading with this deck I find it is very positive. Even some of the cards which are regarded by the layperson as bad cards. The Devil, the Tower, 10 of Swords, all have a positive outlook. The pictures of the animals do not appear fierce or frightening looking. Why the Turkey Vulture which represents the Death card is seems fitting as it feeds off carrion, transforming dead meat into living tissue for sustenance and cleaning up the environment in the process.

In the Major Arcana the title of the cards and the Arabic numerals appear in the top border. Traditional titles and order of the cards are the same except Strength is 8 and Justice is 11. The bee is shown pollinating a flower cluster, this represent Fertility and Spiritual Choice which are the keywords at the bottom of the card.

The cards themselves are standard in size and handle easily, the card stock is thin and flexible. The edges are kind of sharp but rounded off at the corners.

I know many do not care for the set's boxing. The outer box for the set is attractively done but made of flimsy stock. Inside is a second box that holds the book and deck it is simply a brown corrugated shipping container type box and taped together much like a shipping container as well. Collectors will find the box disappointing but the set is well worth it. Ted Andrews has a books out called Animal Wise and Animal Speak which describes the animal in more detail.

I would recommend this for the beginner it can be used with out any prior experience. And the seasonal reader will enjoy discovering the relevance of the animal kingdom to the meanings behind the tarot. Anyone involved in Shamanistic practice will find this set invaluable.