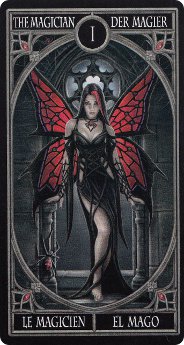 Anne Stokes Gothic Tarot is a 78-card deck from the same artist as the Necronomicon Tarot. The cards are filled with a dark fantasy mix of dragons, unicorns, skulls, vampires and bats. The minor arcana cards just show arranged suit elements, rather than illustrated scenes. 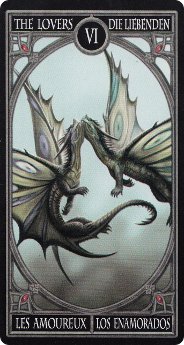 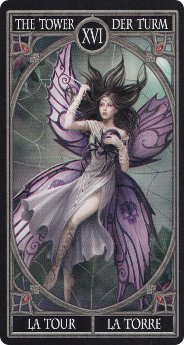 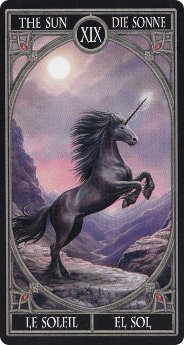 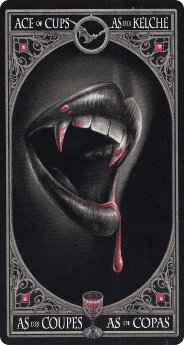 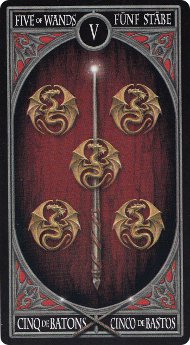 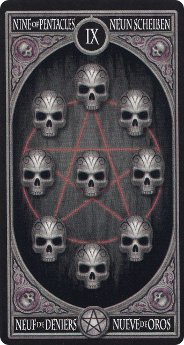 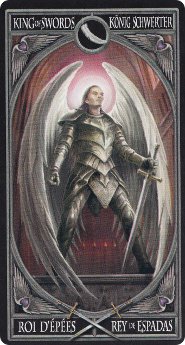 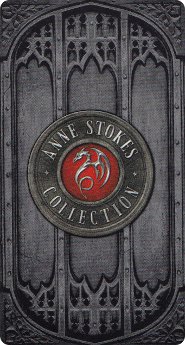 Anne Stokes is a fantasy art illustrator whose work has graced everything from book covers to calendars and quilt covers, and is famously associated with Dungeons and Dragons play books. The Anne Stokes Gothic Tarot is a dark deck in the tradition of the Black Tarot and the Favole Tarot.

This deck uses pre-existing artworks chosen to represent or fit the major Arcana and court cards, as a consequence there are some unusual concepts in this deck - The Hanged Man is depicted as a coiling Medusa, The Tower is shown as a fairy clutching a huge spider, The Chariot - a Dragon spitting flames. The Anne Stokes Tarot, which is in truth more dark fantasy (or possibly the Hobbit goes to hell) than Gothic is populated by unicorns, elves, fairies, dragons, grim reapers, and the occasional vampire - all living in harmony in an all-purpose Medieval castle.

The Minor Arcana is not illustrated but rather uses pip cards of somewhat grim bent. The suits are given as the traditional Cups, Swords, Wands, and Pentacles… But they are illustrated with some rather contrived (to be Gothic) symbolism. The Cups are shown as a silver chalice filled with blood and the numbers denoted by bats, a glowing red pentagram is the background for Pentacles with the numbers depicted by silver skulls, Swords – a silver sword on a purple background with white feathers counting the numbers, and Wands shown as a silver wand with a white light glowing at the tip and numbers counted by gold dragon medallions.

The Court Cards use vampires for the Cups royalty, skeletons or Grim Reapers for Pentacles, Angels with feathered wings for Swords, and dragons and wyverns for Wands royalty.

This deck measures 60 x 110 mm – slightly smaller than usual. The card stock is excellent, low sheen, thin and flexible. It shuffles extremely well. The print on these cards is clear and crisp, the colours are generally inclined toward a darker palette. Every image is set in an ornate frame with the number of the card in a circle at centre top. The name of each card is given in four languages – English top left, German top right, French bottom left, Spanish bottom right – in stark white print. The design on the back is not reversible; a dungeon door or possibly cast-iron shield design with a large medallion dead centre bears the inscription ‘Anne Stokes Collection’ wrapping around a small dragon device.

The little white book (LWB) is written by John Woodward, in five languages – English, German, French, Spanish, and Portuguese. There are no descriptions of the cards, and the definitions are extremely brief. The interpretations given for the Major Arcana are somewhat portentous and unclear for such important cards, but those given for the Minor Arcana speak directly and clearly to the seeker. Considering the brevity of the information given, an experienced reader will easily be able to impose their own interpretations on these cards.

As stand-alone images illustrating book covers, posters etc. these artworks are impressive, but forced into the framework of the tarot they have the unusual ability to negate each other's power. There are lots of Gothic tropes – spiders, bats, blood, foreboding landscapes and wintry castles, but the addition of pseudo-mythological beings is almost too much. It is as if the deck's creators were overwhelmed by the huge volume of Stokes’ excellent work and decided to have a little of everything. If there had been a narrowed focus and much more definite theme this deck would be more successful. Make no mistake Anne Stoke's artwork is highly effective, distinctive and strong – many of the images are beautiful and powerful, but poor editorial choices and a weak minor Arcana let this deck down. The Anne Stokes Tarot is not the only deck to suffer from these problems, the Luis Royo Black Tarot and Victoria Frances Favole Tarot have similar weaknesses.

This deck works extremely well as a shadow tarot and should be given serious consideration for those seeking a deck to serve this purpose. Of course it also will appeal to fans of Anne Stokes' artwork and lovers of dark fantasy illustrations.