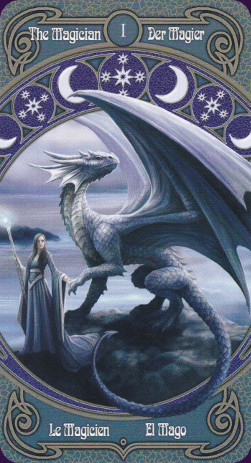 The Anne Stokes Legends Tarot is a 78-card tarot deck with illustrations chosen from the work of the prolific fantasy artist of the same name. The deck is very pretty in a sleek romantic medieval style, but only loosely linked with tarot symbolism. The minor arcana are also pip cards instead of being fully-illustrated scenes. 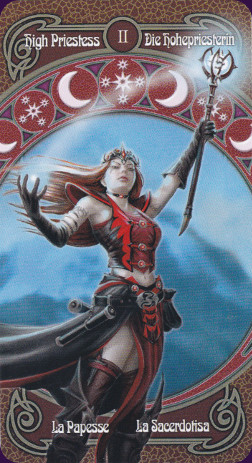 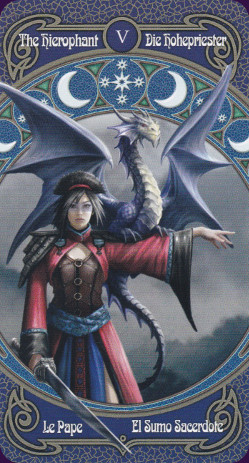 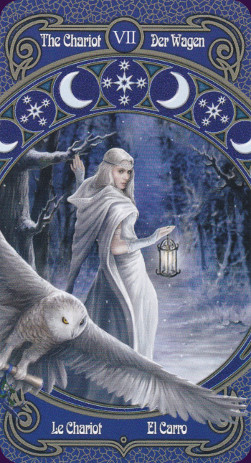 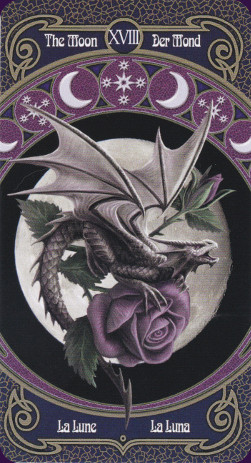 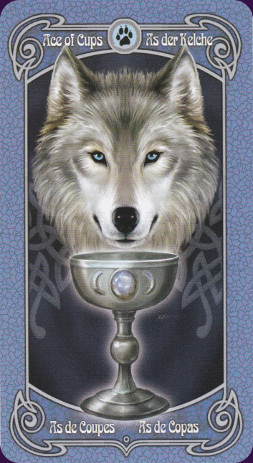 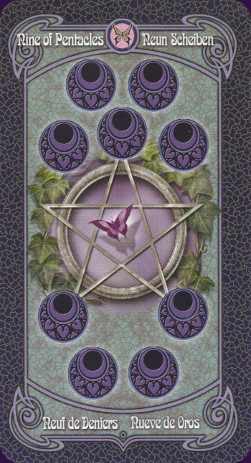 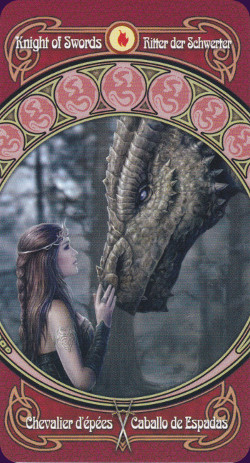 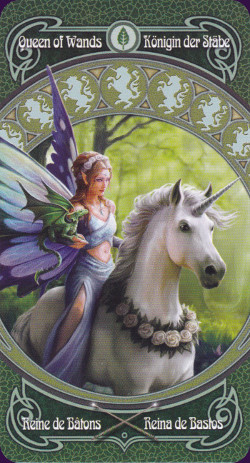 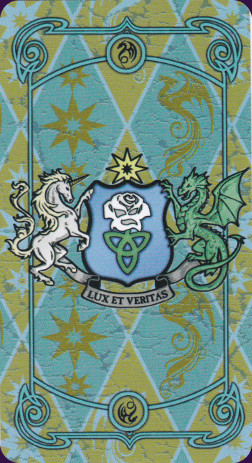 Anne Stokes is a prolific fantasy artist who originally made her name as an illustrator of Dungeons and Dragons books and playbooks. Since then she has moved on to greater things and her works have covered countless posters, book covers, T-shirts, bags, purses, homewares, and numerous other assorted decorative and personal use items.Her artwork has been featured in another Fournier tarot deck – the Anne Stokes Gothic tarot. Her artwork, with its darkly brooding subjects – dragons, elves, castles, knights, sorcerers, vampires, fairies, angels, unicorns – has natural appeal to both the mystically inclined and those of a more Goth persuasion.

Stokes is a prolific artist, giving tarot deck creators a huge library of images to choose from when creating a deck. Her work is professional – deft, self assured, and confident. She works and reworks sword and sorcery and Goth tropes with great imagination and skill.

The Anne Stokes Legends Tarot has less obviously manufactured Goth appeal, however those who are darkly inclined will find this deck far from lacking. It's true that there are less vampires and spiders, and more unicorns and elves, and of course Stokes most of famous subject – dragons – abound in this deck. There is a certain underlying warmth to this tarot (which was certainly lacking in the Gothic tarot) which comes largely from the complementary framing of the images: Major Arcana illustrations are seen through a circular frame of rich, jewel colours which offsets some of the bleaker colouring.

This is a 78 card, pip card tarot deck. The 22 card Major Arcana has no renamed images. The 56 card Minor Arcana consists of the suits of Cups, Swords, Wands, and Pentacles; the number cards are based on the conventional patterns of average playing cards. The Court cards consist of Knave, Knight, Queen, and King. Knaves, Knights, and Queens all feature females, and Kings are represented by totem animals but for Pentacles which features a muscular elf.

The Minor Arcana is colour-coded and features totem animals: Cups are blue and symbolised by a wolf, Swords are red and represented by the Dragon, Pentacles are purple and feature butterflies, and Wands are green and feature unicorns. The numbers on the pip cards are depicted by small discs featuring a silhouette of each suit’s totem animal (except for Pentacles which is symbolised by hearts).

The card stock is outstanding, it is both sturdy and flexible with a low-gloss and very smooth finish. The cards are an ideal size and weight, being a bit like elongated playing cards, and sit comfortably in the hands. They are easy to handle and shuffle. The print quality is very good – the images are clear and the colours rich. The image on the back of the cards – a coat of arms featuring a unicorn and Dragon holding a shield, bearing the motto Lux et Veritas (light and truth) – is not reversible.

The illustrations are classic fantasy art, that is fantastic subject matter depicted in an extremely ‘realistic’ manner. Given the subject matter the images are often rendered in a darker palette – grays, blues, purples, deep greens, rich browns, with the occasional foray into brilliant, fiery reds and oranges. There is a strong element of mediaeval romance to the images – for viewers of Game of Thrones much of the style, fashions, and settings will seem uncannily familiar.

Each Major Arcana image is seen through a circular frame featuring an arc of discs printed with moons and stars. The titles of the cards are given in English, German, French, and Spanish – one language in each corner – and separated by organic, coiling Art Nouveau line work which forms an outer frame to the image. The Major Arcana cards’ number is given on a disc front and centre above the central illustration. With the Minor Arcana the titles are also given in English, German, French, and Spanish but they are written in long form (i.e. Seven of Cups) and separated by the same elegant, curling framework.

The cards come packaged in a close-fitting cardboard box along with a Little White Book. The box itself is suitable for storing the cards but will quickly become worn and/or torn if treated roughly or not kept in a suitable protective covering.

The 102 page LWB is something of an improvement on previous Fournier instruction guides. The information is given in Spanish, English, French, German, and Portuguese. Without preamble the reader is plunged headlong into divinatory meanings: for all 78 cards there is a brief passage in which the spirit-essence of the card addresses the Seeker directly, describing its actions, intentions, and ambitions. This is followed by a reasonable assortment of commonly accepted interpretations, both upright and reversed. There are no descriptions of the card images, thus no explanations of symbolic choices, or the actions depicted. No further information, including divinatory layouts, is included.

The Anne Stokes Legends tarot deck is one of the better decks released by Fournier. If you are a fan of Anne Stokes’ art you will undoubtedly want to add this deck to your collection. If you are interested in fantasy, and sword and sorcery artwork then this deck is definitely worth a look. If you like to work with pip-card decks then this is definitely worth checking out. It is not recommended for beginners – the images are completely divorced from traditional decks, and the pip cards are homogenous cut-and-paste jobs. Overall this is quite a charming deck, which, with a fully illustrated Minor Arcana could have been a fabulous deck.