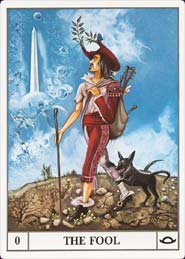 The Ansata Tarot contains 22 cards of very detailed, complex imagery and esoteric symbols, mixing European and Egyptian motifs. The 22 cards were first published in 1981 in German, then in English in 1985.


Card Images from the Ansata Tarot 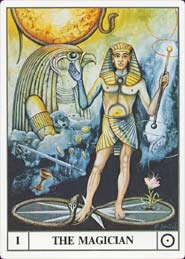 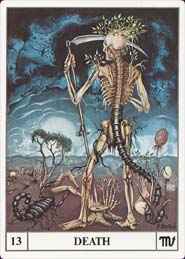 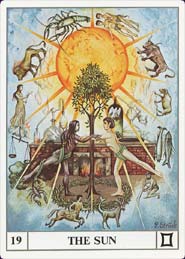 The Ansata Tarot deck is currently available from Tarot Garden, Amazon, US Games Systems, AGM Müller, and other retailers. It is available in both German and English versions. It was designed by Paul Struck as a companion to the book Astrologie und Tarot by Bernd Mertz. The set comes packaged in a vinyl case that opens on the side.

The Ansata Tarot is a 22-card Majors only deck, with Strength being 11 and Justice 8 in this deck. The cards are very detailed and complex, most closely associated with Astrology, but contain many esoteric symbols and are loaded with occult symbolism in general. The card backs feature a geometric design with a central image of a two-tone square inside a two-tone circle. When first beginning with the deck you won’t be able to tell if the card of upright or reversed until you get used to seeing that particular shape in one direction or the other. After a little while, though, it will become noticeable from the card back whether the card is upright or reversed. The language on the cards is English in both editions. The cards are standard size in some editions and a slightly larger in others, depending on the year they were printed. Shuffling the cards is not too clumsy since the cards are well made and sturdy, but also flexible.

The artwork of the deck is done in a classic style, leaning heavily on Egyptian themes and imagery. Rather than a rehash of the Rider-Waite, this deck has taken the symbolism of the cards in a whole new direction. The same original themes are clearly there, and the cards are easily recognizable to any student of Tarot, but the images are a little darker than the norm so some may find them a little disturbing. They are very surreal, designed to stir the imagination and get in touch the shadow self in order to better learn from both the darkness and the light. They have been described as grim, melancholy, gruesome, and even frightening, but only if one takes the images only on a first glance. If you look deeper into the images, the true meanings of the cards and the artwork really shine, the messages of the Major Arcana that much more powerful simply because they show the darker sides as well. There are always two sides to every lesson of the Major Arcana, warnings along with the lighter aspects, and this deck displays both very well. If you only want a light-hearted, happy deck, this one may not be for you. But if you are interested in really examining all parts to a situation, then this deck will light up every corner of your mind, illuminating everything that may be lost in the shadows.

The biggest difference in this deck is in how it was produced. Most decks are created first with the companion book written to go (usually) only with that particular deck. With the Ansata Tarot, Bernd Merck, a highly respected Astrologer from Germany, wrote Astrologie und Tarot to bring out the Astrological aspects of Tarot and was meant to go with many different decks. Inspired by the book, Paul Struck took his lessons and ran with them, creating a Tarot deck that is directly linked to Astrology. The Magician is astrologically linked to the Sun and The Universe is linked to the sign of Taurus, each card clearly marking the symbolism behind its meaning and the Astrological references of the cards. No background in Astrology is needed; the name, number and astrological sign are shown at the bottom of each card, which corresponds to one of the ten planets or twelve signs of the Zodiac. The small companion booklet that comes with the cards gives a brief description of the card meanings and offers a few choices spreads to use, including a short horoscope spread.

This is the kind of deck that readers will either like immediately and be completely drawn to or will provoke instant dislike. There doesn’t seem to be any middle ground with the Ansata Tarot. Every new edition is sold out fairly quickly, so even with reprints it is a fairly rare deck to come across. If you find one by accident at a fairly reasonable price, grab it because you may never see another one. It’s not a deck for the meek, but the artwork is exceptionally powerful.