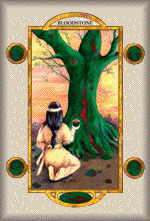 Work with the crystals' healing energies and principles and explore the crystal realm in the AORA Gemstone Oracle Cards. A particular gem is associated with each of the 44 cards in this gorgeous oracle deck. 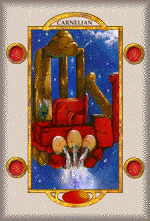 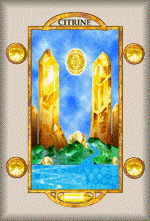 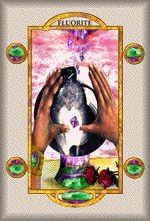 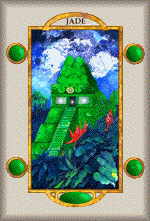 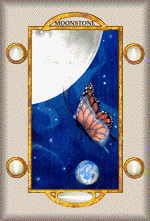 The AORA is a 44-card divination deck by authors Roberta Carothers and James McKeon, with artwork also by James McKeon with assistance from Noreen Levi. First published through Viktara in 1998, it is still readily available from many different retailers and bookstores for $29.95. The set includes the 44 cards and a 112-page book by the authors.

Aora was an oracle and healer well known in ancient Egypt, Greece, and Atlantean mythology. Her name means “Golden Light” and is the origins of the word “aura.” She lived in Zezirath, Egypt, near ancient Memphis, in the time of Pharaoh Zoser and his most famous priest, Imhotep, both of whom are reported to have consulted her. She catered to pilgrims who desired healing, enlightenment, and divinational answers, and founded a Mystery School for Crystal and Gemstone Healing. She played an important role as an Oracle Priestess, her gifts sought during illness, childbirth, and times of trouble. Her teachings have been passed down by word of mouth for generations, according to legend, and much of what we know of crystal healing today comes directly from these teachings.

With this history in mind, James McKeon created AORA: The Gemstone Oracle, basing the “Chalice of Life” Spread in the book directly from her teachings. McKeon is one of the foremost experts in crystal healing, sharing his knowledge around the world with anyone who wants to learn. He has an extensive metaphysical background and has spent two decades traveling the world to study ancient cultures, art, religions, archeology and mystical phenomena. He originally began the project in 1993, the culmination of a lifetime of study and experience in the field of crystal healing. Since being published in 1998, The AORA Gemstone Oracle has received rave reviews from just about every source imaginable. But the deck actually began with a lucid dream.

“THE DREAM - This journey begins as many do, with a mystical voyage. In this adventure, it was an actual inner experience that sparked the creation of the AORA Gemstone Oracle Cards. The first journey to meet AORA transcended ordinary reality and took me into another dimension or plane of consciousness! In the spring of 1993, I was at a crossroads, without a tangible sense of what I wanted to do, to take the next step in this Life. The winds of change had swept through my world very abruptly, and I became aware of an unknown level of reality, concerning the realm of gemstones & crystals. My sense of spiritual and physical reality was greatly expanded, and it was at this crossroads, that the first encounter occurred, and I met AORA (A-OR-RA)…The knowledge and wisdom of the gemstone kingdom was very simple and direct, AORA emphasized. "It has always been about self-empowerment,” she stressed. It was not what the stones could do for us, but that they were keys or portals to unlock our own potential and spiritual/psychic power.”

An excerpt from the Introduction found in the companion book, The AORA GEMSTONE ORACLE, pg.1, by James McKeon.

This deck is extremely easy to use, laid out to represent a journey into the realms where the crystals themselves originated. Each card gives detailed explanations of the mystical and healing properties of each gemstone, their sacred uses, and what they can do to enlighten you on your own journey of self discovery. The artwork is stunning, and vividly draws the seeker straight into the realms described in each card. No background into crystals is necessary. The deck was designed for both beginners and more advanced students to be able to use, and each card gives such detailed information that you can’t possibly get confused as to the meanings.

The 112-page book included with the set is very concise and thorough, making the system very clear and easy to understand. It has a quick, “at-a-glance” format that enables you to begin using the cards immediately with great success. It contains six layouts designed to explore the healing, spirituality, and history of the gemstones in the set, Messages of the Day for each card, and background into the eight gemstone families. It also has a section on the spiritual symbols, astrological affinities, chakra and healing properties, and historical basis for the information presented, along with a word glossary in the back for any unfamiliar words that the reader may not know. Scholarly and well-written information, almost an encyclopedia, has been broken down into a very entertaining and easy too understand storyline, following the journey through the cards from first to last.

The cards themselves are well made and sturdy, the book durable and made to last. Reviews of the deck on various sites have commented that its has become one the favorites in the collections of Tarot and Oracle enthusiasts worldwide. This is a deck that many will find interesting at the very least and fascinating if open to the experience.