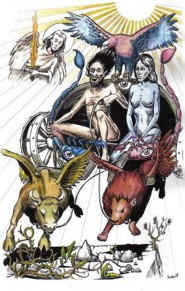 Also known as Tarot Apokalipsy, Tarot of the Apocalypse

The Apocalypse Tarot is based on an non-orthodox, esoteric interpretation of the main Christian symbols and ideas, and has three groups of cards corresponding to different spiritual levels. Now available in a self-published edition from the artist.


Card Images from the Apocalypse Tarot 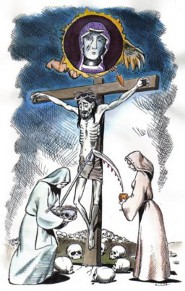 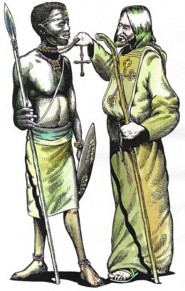 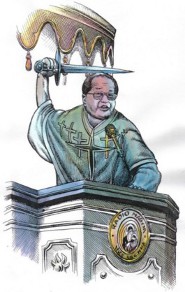 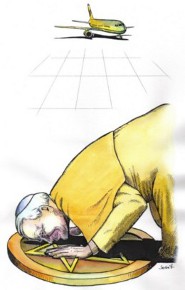 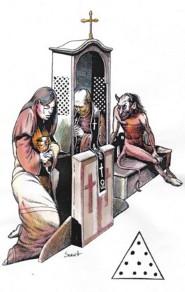 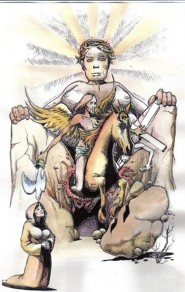 “The Apocalypse Tarot” is a 78 card deck from Poland based on traditional Tarot structure. That is where tradition ends! This deck represents a very unique approach to the Tarot – through the use of images from Esoteric Christianity in the Major Arcana, and images from Polish Catholicism in the Minor Arcana it heralds the impending radical changes critical to the crisis of traditional European religiosity.

Swiatoslaw Nowicki is a Polish philosopher and astrologer. He is also a translator and expert on the German philosopher Georg Friedrich Hegel. He works with music theory, the music of the spheres, astrology, astronomy, philosophy, and all things esoteric.

The cards come without a LWB (Little White Book). An e-book version of the LWB for this deck can be downloaded from the deck site – http://www.swiatoslawnowicki.com/en/. Also available are the following e-books – Book 1 “The Magical Love Story of the Master and Magdalene to the Glory of the Angel”, and Book 2 “A Guide to Esoteric Christianity in 78 Images”.

I am going to include reference to the guide to the book in this review, because there is no other way that the depth of these cards would be understood. The Major Arcana reference the highest, eternal level of awareness. The Minor Arcana pips present the life of a Catholic as regulated by sacraments, commandments, etc. The Court Cards depict the story of Jesus Christ, the circle of people relevant to Christianity, and Christianity’s division into the main churches.

Nowicki takes great care to present his reasoning for the Major Arcana through the auspices of astrology. You will learn from this guide, even if you do not totally agree with it. There is an absolutely stunning color graphic that shows the relationship between the cards. Absolutely fascinating! I also appreciate that because this is a digital presentation, the reader can click on the exact section they want to go to, and there is the information. I love my books “in hand”, but digital versions do have their saving graces!

Nowicki discusses such things as dualism, the fours as the great fulfillment, sixes as remedies, and eights as an individualist assent. Also included are card descriptions for the Major Arcana and the Court Cards.

The cards are 2 ľ” by 4 ľ”. The backs are a deep brown, with two rams heads facing each other, with smaller rams heads in the four corners, and one in the middle on each long side of the card. The backs are reversible. The card faces show a white background, with the card image taking up approximate ľ of the deck. Across the bottom in bold black letters are the card number and title (for the Major Arcana), title and suit (for the Court Cards), and the card number and suit (for the Pips – numbered cards). In smaller lettering across the bottom (in English and Polish) we see the key thought for the card. Traditional titles are used, with the exception of the Hierophant becoming the Pop. Strength is VIII, Justice is XI. The suits are Wands, Cups, Swords, and Pentacles. The Court cards are Page, Knight, Queen, and King.

One of my favorite cards is the High Priestess. The outline of the image is the wide open mouth of an animal with sharp teeth. Inside we see the image of an older woman, who appears to be looking down at the image of a modern nude female, who appears to be looking up at the first image. The key thought for the card is “The vision creation prior to the creation of the world.” From the LWB, we see that the Priestess represented here is Sophia, the Divine Wisdom. He does not exist until someone comes to look at the images reflecting in her mirror. She is the “mirror of eternity”. The images appear when light is sent into darkness.’

The Chariot carries the concept of expulsion from Paradise. There is an eagle, with his wings spread, on the back of the chariot. Two figures are riding in the chariot – one male, one female. In the upper left hand corner we see a winged angel. The figures in the chariot represent Adam and Eve, descending from the world of spirit into the physical world. The chariot is drawn by a winged bull, and a winged lion.

In the Hanged Man, we see a ladder reaching from the earth up into the heavens. The key concept is that of “The Savior:. A figure hangs, head down, from the ladder. Jacob’s Ladder has become the Christian cross. There is an eagle in the upper right hand corner, and an angel in the upper left hand corner. Underneath the hanging figure we see a bull and a lion. The Page of Wands carries the concept of “Birth”. We see a female figure in a green robe (representing the Madonna) holding a newborn baby. In the background we see the Temple of Jerusalem. Above the temple’s roof the Star of Bethlehem is glowing, and two cherubs are tearing away the veil that has been covering the sacred place. Behind the veil is the Ark of the Covenant, radiating brilliant light.

The 6 of Pentacles carries the key concept “gamble”. We see a woman sitting at a table, Tarot cards in front of her. A male figure sits sideways to the table, playing cards in his hands. The e-book Guide does a wonderful job of describing the esoteric relationship of the cards to one another. This is a deck that may be used on many different levels, according to the needs of the student/Seeker. There is nudity in the deck which, while not inappropriate, needs to be taken into consideration when reading for someone else.

The artistic style is very modern, with a touch of fantasy and whimsy to it. The art carries the message of the card … neither overcomes the other. From me … two thumbs up!