The Arcus Arcanum Tarot is a more male-oriented deck, and has brightly coloured, scenic comic-book type artwork. It uses the typical suits of cups, wands, swords and disks. 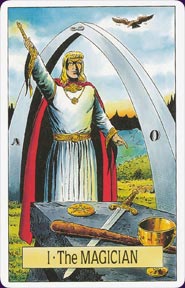 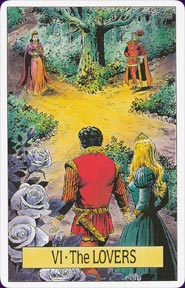 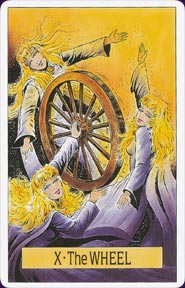 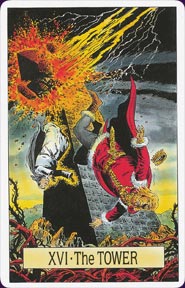 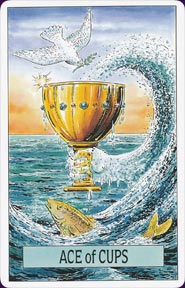 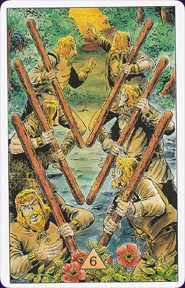 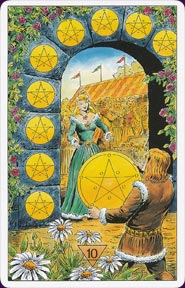 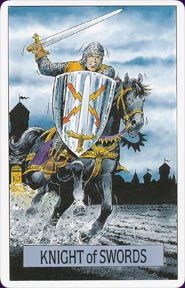 This is my first and only tarot-deck. I have thought about getting a new one. But there is so much to discover about this deck. I would not say that this is a deck for beginners. The symbols are very easy to interpret. But the little book that comes along with the deck is written in gibberish I think. I have after seven years of sporadical studies found out that the best way to use it is by just using your intuition and imagination. Of course with the little book as a help. But not as the only guide to the interpretations.

The pictures are cartoon-like and very beautiful. My favourite is The Moon which has a very magical feeling in it. The High Priestess is another favourite which I see very often. The cards are of normal tarot-size which is a little too big for me, but they are easy to handle overall. I don´t think it would do the cards justice if the deck was smaller. The people on the cards are very tall, thin and beautiful but that is always how it is in cartoons. And they really speak to me. The animals are very life-like and well-drawn. I love animals and therefor this is a very important part for me.

When I bought this deck I had only seen The Magician. And only in a very small picture in a catalogue. But when it arrived I was thrilled! The colors, the people, the wonderful animals! And the back of the cards are also very nice. Blue and black with disks, cups, wands and swords in a mix in the middle.

It takes a while to become friends with this deck but when you do you have a deck that you don´t want to be without!