The Art Nouveau Tarot by Matt Myers is decorated in a gorgeously coloured, vibrant (though rather eighties-looking), stained-glass style of imagery. The major arcana are reasonably traditional, while the minor arcana are unique in that they tell the story of four couples going through the trials and tribulations of life together. 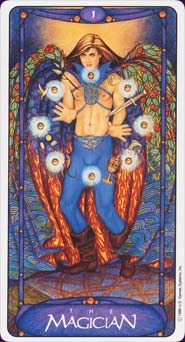 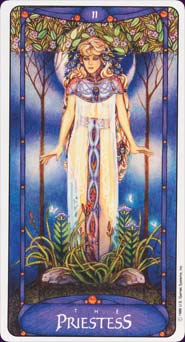 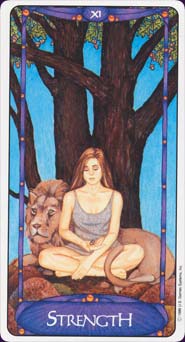 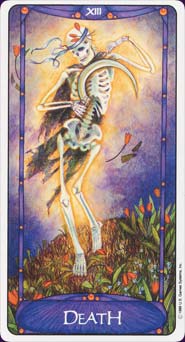 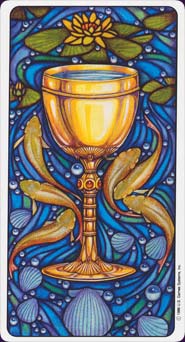 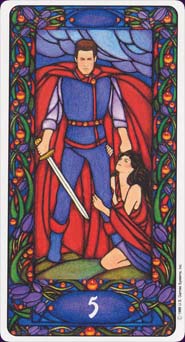 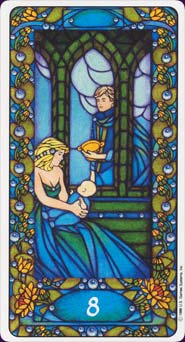 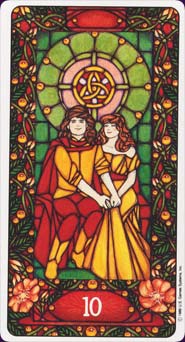 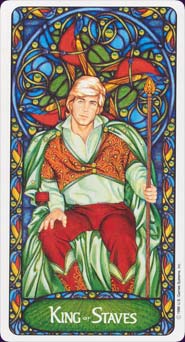 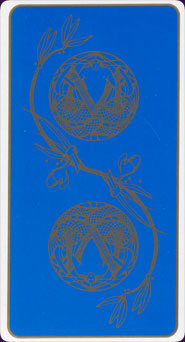 I bought the Art Nouveau after seeing various sample cards on the Internet. The deck is smaller/medium size (same size as Swiss 1JJ or Tarot classic), with blue backs, plastic coated for durability and easy shuffling. The art style and rich colors used in this deck are just outright beautiful and more attractive "in person" than the scanned pictures.

Matt Myers painted the deck in oil and used human models for this project. The first thing that stuck me about the Art Nouveau deck is that unlike many tarot decks (painted in watercolor) is that the colors are beautifully dark and the people painted on the cards have very "real", distinct facial features. Myers is such a talented artist that some cards (The World for example) almost appear to be a photograph instead of a painted picture.

The major arcana are really stunning in this deck. The rich reds and blues really make this deck "vibe right" and keep it from being too cute to take it seriously. The major arcana have some interesting "simple" symbolism in it. The Moon card is a woman and The Sun card is a male, this goes along with older esoteric teachings and I am surprised to see it here so blatantly (I like it myself). The Strength card is also a winner, the girl in the card is holding an acorn while sitting with a lion. I love the idea that she might not have found strength (or know how to develop it yet), but she's on the right path (working on it) all the same.  The tree in the backdrop of this card is there to show the fruits of her labor and that someone can get there through hope and faith. The Lovers is a very sexually charged card (as it should be) and refers more to the marriage bed than the wedding ceremony.  The Death card is a real beauty here and shows a skeleton dancing in a bed of blooming flowers, how true that seems to be.

I really like The Priest card a lot (maybe my fav. along with The Moon), it depicts a dark haired man standing in deep prayer in a church at the communion rail. The Priest is in Anglican dress and the three rings on his rosary, the three candle candelbras, and the illuminated background refer to the Holy Trinity. Some of the majors could have been done slightly better as far as symbolism is concerned. On The World card I would have put a double flamed candle in the woman's hand. The Priestess is a little too "mean" looking for my taste.

Some of the cards (I'm talking about the whole deck here) depict overly young looking people on them. It's not enough to keep me from being able to read with this deck, but I admit it did rub me the wrong way at first. The artist is my age (middle to late 30's) and since the deck was first printed in '89, he was a still "a kid" when he painted it. Being male, I know we do mature later than females. I don't doubt that he, like myself, has come to understand the meaning of the word "maya". At any rate, some of the major arcana suffer from the Barbie & Ken look. It may be because we can actually see their faces on this deck. It's easy to forget that the persons in the Rider-Waite deck are also very youthful, because that deck is painted in a softer style. I personally can accept the youthfulness of this deck without considering it a flaw, but some tarot lovers might not reach that same conclusion.

The minor arcana court cards are very well done and in some, like The Knight of Swords the reader is actually given more symbolisn than included in older traditional decks. I would have liked to have seen the Pages a little less masculine looking in this deck.

The pip cards are where the trouble with this deck gets started for many people. I hated them at first, but after reading the little instruction book included with the deck, I began to understand the pips.  The pip cards depict four different couples in the stages of their relationships. The meanings of the cards are the same as the traditional decks, but the scenes are totally new. A few reminders of older decks are thrown into the pips here and there.  This might be too much for some people, but for myself I found that I can relate to the pip card story lines. I also find that I'm really reading the card and not giving the meanings a romantic spin that the pips suggest, unless that romantic spin is called for. Yes I admit, this deck is awesome for readings concerning matters of the heart, but not only for that subject. I know that some people have a lot of trouble remembering the pip cards (I've been there too) and this system might be one that works for them "memory wise". I love the cup cards with the baby (makes me wish all the harder for the right woman and child in my own life) and the Celtic knots in the coin suit add an "earthy touch" to the deck. It's great to have a deck that inspires the hopes and dreams of the reader as well as the consultant, in my humble opinion, because it kind of puts you both in the same boots.

All in all, I really like this deck. Let me state again that in my opinion the art is just outstanding compared to most tarot packs (even the backs with the double planet design). If I was to place any themes on the deck they would be, romantic, darkly beautiful, Christian, Celtic, very slightly Pagan/Wiccian, and innovative. If you like those things (like myself) I'd highly recommend this deck.

I found the coloring and the style of this deck interesting, but it left me feeling a bit edgy. The more I looked at and read about this deck, the edgier it seemed. Not being schooled in art styles, I did have to do some homework on art nouveau, and my initial impression of the influence of stained glass design (a specific form of art nouveau) did hold true. However, if we define Art Nouveau as U.S. Games does in the LWB (Little White Book) that accompanies this deck: stylized and decorative, then it may fit the category.

My major rant about this deck may indeed be said LWB: as was the format of its time (1989) it is done in one sheet, folded in half, and then in on itself several times. I find this very annoying!

Myers originally painted in the Art Nouveau Tarot in oils, using live models. This is good and bad, because what has happened is that the same models were used for more than one card, and it becomes annoying. There is an extra card that is essentially a self portrait of the artist that is included with the deck. The predominate colors are orange, blue, purple and turquoise.

The LWB shows no scans of the cards, merely listing a short description of each card, and its upright and reversed meanings. The elemental attributions for the Staves and Swords are reversed from the traditional: in this deck Staves = Air and Swords = Fire. The Pips (numbered cards) are also a bit different, in that they show only one graphic representing the suit on each card (i.e. the Seven of Swords shows only one sword). Also, the Pips follow a storyline specific to each suit, and that do not necessarily bring out the true energy of the card in a definable manner.

The cards themselves are approximately 2 3/8" by 4 3/8", which does make them easier to handle by those of us with small hands. They are of good quality, glossy card stock. The backs have a 1/4" white border, followed by a thin gold border. The background is dark blue, with a vine-like gold illustration in the middle, with a circular gold graphic on either side of it, making it impossible to tell if the card had been drawn in the upright or reversed position.

The card faces show the same 1/4" white border. The Major Arcana show the Roman numeral for the card in white lettering at the top of the illustration, with the title in white lettering at the bottom. The Pips show the card number at the bottom of the illustration. The Court cards show the title and suit across the bottom of the card. For continuity, the clothing of the figures is color coded: Coins are yellow, Cups are blue, Staves are green and rust, Swords are lavender and rust.

Some of the cards are presented in a traditional manner, some are not. The Fool appears to be hovering in mid-air; the Magician has his hands out in front of him, as if he is juggling the four suit symbols; the Priestess is standing; the Priest (Hierophant) is a youngish figure that I do not relate to the energy of this card at all; Death appears as a dancing skeleton; the Tower is seen far in the distance. The Sun is seen as a male figure in gold, and is actually quite good.

Each of the Minor Arcana (Pips and Court cards) shows a vine-like border that is specific to its suit. The one card that looked traditional in each of the suits was the Ace, which was shown with its elemental energy body: The Ace of Swords showed Salamanders and tulips; the Ace of Staves shows a flowering vine and two brightly colored birds; the Ace of Cups shows fish and water lilies; The Ace of Coins shows weasels and roses.

The illustrations on the Pips are not traditional - they basically show the same male/female duo going through a series of issues. For the suit of Coins, the progression is fairly reflective of the nature of the card. The Three of Coins shows the female figure dancing in celebration, the Four of Coins shows the same figure seated, with the coin symbol in her lap. The Seven of Coins shows both figures planning together, while the Ten of Coins shows them seated and content.

The sequence for the Cups shows the couple with a baby. For instance, the Three of Cups becomes mother, father and child. The Four of Cups shows the mother holding the child, with her back to the father, who is seated with his arms crossed in front of him. The Five of Cups shows the father seated alone. The Eight and Ten of Cups brings the family happily back together again.

The suit of Staves also uses the imagery of a couple, with no child included. The Three of Swords is very strange, showing the couple, seated, with a male figure standing, facing them. The Ten of Staves shows the male figure, with his head in his hands.

The colors and the artwork are well done, but the imagery, to me, was not enough to carry the intent of the cards. This deck would be interesting to have as an addition in the "art" category for collectors, or for an experienced reader that was attracted to the art. An inexperienced reader would have to constantly refer to the LWB, and the "storyline", and would be able to make little headway. This is one of those decks that I would use for specific readings, but not as a general reading deck.