Art Through The Eyes of the Soul Oracle 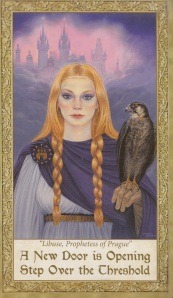 The Art Through The Eyes of the Soul Oracle is a 52 card deck with visionary and 'neo-mythic' art based around four mythical lands meaningful to the artist: Narnia, Avalon, Bohemia and Lemuria. Some of the art is familiar from her prevous publications. 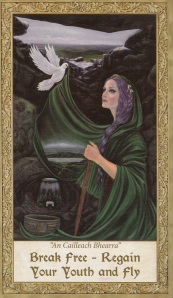 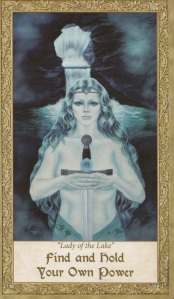 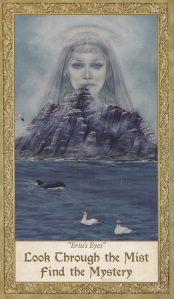 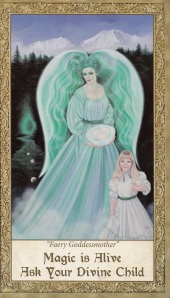 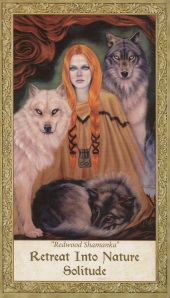 “This oracle deck is a vehicle to provide persona
intuitive guidance from the mythic beings and
Divine entities that inhabit sacred sites and spaces.”
~ From “How to Use the Oracle”

“Art Through The Eyes of the Soul” is a 52 card oracle deck, accompanied by a 108 page companion book. The presentation is true quality – the cards and companion book come in a hard cardboard box with a lift off top. The image on the top of the box is that of the Lake”, which is also used on the cover of the companion book. On the back of the box is information on the deck, along with a small illustration of the card back. Did I mention that this deck is gilded? This deck would have been awesome without the gilding, but the gilding adds a sense of magic and “otherworldliness” to it. Kudos to the author/illustrator, and kudos to U.S. Games Systems, Inc.!

The original paintings for this deck were done in oil, giving the cards a stunning depth of color. Many of the paintings in this deck were featured in Rose’s book “Art Through the Eyes of the Soul”. Here she explains her journey as a visionary and Neo-Mythic artist, the four mythic lands that she bases her work on (Narnia, Avalon, Bohemia, and Lemuria), as well as her habit of tuning in to a subject through the eyes to paint a psychic impression. (I am brought to mind Johanna Gargiulo-Sherman, and her deck “The Sacred Rose Tarot”. Here the figures in the deck have black spaces for eyes.)

Rose suggests that meditating with the images connects the Seeker with the energy field of the location where the painting was conceived. The Seeker weaves their own fate by tuning into their higher self and allowing that spontaneous connection to answer their question or suggest advice. Drawing a single card to ask for daily guidance, or to use in meditation, acts as a catalyst to the Seeker’s own thought process.

There are also iPhone and iPad apps for this deck that include music and animation.

It is suggested that the cards be cleared before using them the first time, using either incense, or smudging them with sage. It is also suggested that they be placed on the Seeker’s sacred alter, along with other objects that are charged with significance by the Seeker’s own thoughts and intentions. The cards will absorb the Seeker’s vibration, allowing them to become a powerful personal tool. The bag may then be placed in a velvet bag, or some type of container, to hold the essence of the Seeker close. It is advised that the Seeker not allow anyone to play with the cards, or to treat them disrespectfully.

The companion book shows each card with a black and white scan, card title and date painted, an expanded meaning, and the story behind the card. Card subjects include Anastasia, Ariadne, Sophia, Eriu, the Goddess Sovereignty, the Glastonbury Goddess, the Hermit, Iona, Lady of the Lake, the Lord of Lyonesse, Merlin, Oceana, Redwood Shamanka, the Third Pillar, Wolf Child, and more.

The cards are approximately 3 ˝” by 6”, of glossy card stock. The backs show a blue/black cave like setting, showing a path moving into light on the left hand side of the card. At the bottom of the card we see the eyes and forehead of a female figure, wearing a decorative headpiece. There are two thin gold lines around the edge of the card, with gold imagery at each of the four corners. The edges of the cards carry a gold gilt.

The card faces have a Ľ” plain gold border, followed by a Ľ” gold border with imagery. At the bottom of the card is a cream colored block showing the card title and a key concept.

The card entitled “Lady of the Lake” carries the key concept “find and hold Your Own Power”. The imagery shows a female figure, standing, both hands holding a sword, pointed down, with a waterfall behind her. The expanded meaning reads: “Stop giving away your power to others. Have the self-confidence to stand firm. Others will be Inspired by your strength and commitment.”

The card entitled “Eriu’s Eyes” carries the key concept “Look through the Mist – find the Mystery”. Here we see a body of water, with swans in the foreground. In the background we see an island, with a larger than life head of a Goddess appearing in the sky behind it. The expanded meaning is “don’t cloud your judgment with doubt – believe! The secret of Divine creation is within you. The Goddess is waiting to help yu manifest your dreams.”

The card entitled “Faery Goddessmother” carries the key concept “Magic is Alive – Ask Your Divine Child”. Here we see a female figure, standing, with a bowl of magical orbs in her hands. A young girl in a beautiful dress stands in front of her. In back of them is the forest, with Mt. Shasta in the distance. The expanded meaning is “Ask your question with a sense of lightheartedness. Adopt the unhindered enthusiasm of youth to open the free flow of ideas and answers from your guides and guardians. Keep your child-like wonder and imagination active, while living in the world. Dream …”

The card entitled “The Great Goddess” carries the key concept “Regeneration – Death and Rebirth”. We see a female figure, dressed in a blue gown, her left hand at her side, her right hand held out in front of her. The expanded meaning is “One life cycle ends and another begins. Flow with the cosmic rhythms to become the master of your own fate.” The year listed under this card is 1989.

The card entitled “The Burning of the Sage” carries the key concept “Visualize healing”. Here we see a female figure, facing the left hand side of the card. In her right hand she holds sage. Over her right shoulder we see a white bird/ In the distance, in the left hand corner, we see the pinnacle peaks of the Castle Crags. The expanded meaning is “Address health issues with positive visualizations. Use your intuition to connect into your energy field and identify the causes of your distress. Research may be necessary to get a balanced view.”

The card entitled “The Goddess Sovereignty” carries the key concept “Become Your Own Sovereign”. Here we see a female figure, in a lavender dress and veil, holding a cup in her hands. Behind her we see a lavender rose opening up. The expanded meaning for this card is “Envision and insist upon being treated with integrity and respect.”

The card entitled “Libuse, Prophetess of Prague” carries the key concept “A New Door is Opening – Step Over the Threshold.” We see a female figure, standing, with a falcon on her left arm. In the background we see a castle, as if she is seeing it in her mind. The expanded meaning for this card is “Doors open to allow us the opportunity to reach our fullest potential. Do not fear unknown territory.”

The card entitled “An Cailleach Bhearra” carries the key concept “Break free – Regain Your Youth and fly”. We see a female figure, facing the left hand side of the card, a white bird in front of her, holding up a corner of her cloak. The expanded meaning for this card is “Transcend time and space and all known boundaries. Adopt positive patterns that regenerate your body to begin a new cycle of growth and opportunity.”

The card entitled “Redwood Shamanka” carries the key concept “Retreat Into Nature – Solitude”. We see a female figure, with red hair and a red gown, seatged, facing us. In front of her right shoulder we see an animal allie, in back of her left shoulder we see a second animal allie. The expanded meaning for this card is “Take time out for yourself. Leave the daily routine and return refreshed and renewed.”

The card entitled “Beneath the Veil of Sophia” carries the key concept “Create – Activate Your DNA”. Here we see a figure dressed in a lavender robe, unveiling herself as a creatrix. The expanded meaning is “Let the arts be a catalyst to bringing your inner visions and ideas into form. Anything you can dream you have the power to create.”

There is incredible energy in this deck – I feel that it is a valuable tool for those from all backgrounds, and those of all ages. In these cards we see the world of myth and magic – it become so real to us that is feels like a parallel world, a parallel reality. This is a wonderful deck for these changing times!


Complete Details of Art Through The Eyes of the Soul Oracle


Similar Decks to Art Through The Eyes of the Soul Oracle

Creator: Art Through the Starstream Oracle by Cheryl Yambrach Rose

Home > Decks > Art Through The Eyes of the Soul Oracle