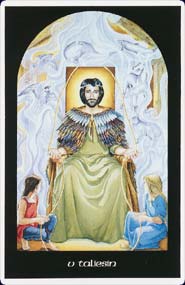 The legends, history, and tradition of Arthurian Britain are the theme of the Arthurian Tarot. The major arcana cards depict Merlin, Guinevere, the Lady of the Lake and other familiar characters, while the minor arcana have landscape scenes. First published in 1991, it's been re-published as a 25th anniversary collector's edition.


Card Images from the Arthurian Tarot 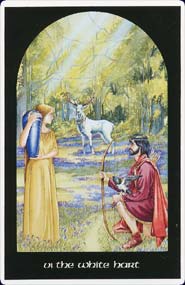 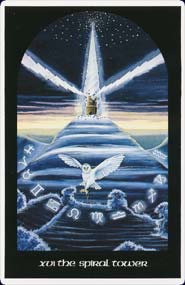 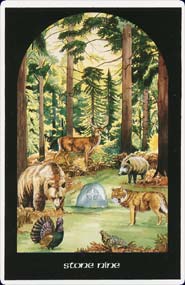 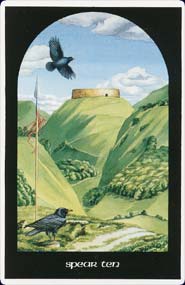 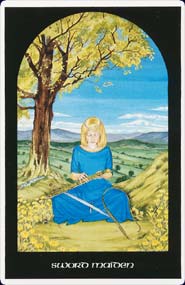 I was pleased to acquire this Deck and Book set. I originally saw it in one of Rachael Pollack’s books during a spread example. It would be nearly 18 months before I found the set at a local bookshop, which I purchased without a second thought.

The package was a rather nice setup, a small box, the deck itself, a 148 page book, and a second empty book to use as a journal. We’ll start with the deck, and discuss the book later on.

The deck I felt was amazing to look at. The card stock is stiff and firm, which is something I personally look for. All cards have a black border, giving each card a window like appearance to the scene within. The card backs are not reversible, and you can easily tell if a card is reversed or not before you draw it. On each back you have four castle towers, a rainbow, and a woman sitting on a stone, a spear against her shoulder while holding both a grail and a downward pointing sword.

Since the deck was designed around the King Arthur Theme, as well as his court, a fairly large number of cards have been renamed. First, the Matthews renamed the major and minor arcane to the Greater and Lesser powers. They then changed the suits to better reflect the Celtic tradition during that time period. The suits they selected are: Spears (wands), Swords, Stones (disks), and Grails (cups).

Each of the lesser power suits starts with the suit name Hallow (Example: Spear Hallow). Each hallow is shown sitting amongst the element the creators associated with that suit. The elemental associations are as follows: Spears (fire), Stones (earth), Swords (air) and Grails (cups). Likewise, The 10 of Spears is known instead as Spear Ten, likewise the 5 of Swords becomes Sword Five. Each Suit also contains the typical four court cards, named as follows: Maiden, Knight, Queen and Knight.

The suits then follow the following pattern, after experiencing hallows in place of an ace, we see the progression through the hallow in cards 2 - 9, which are vividly drawn landscapes in relation to the King Arthur legends. The final card, a ten, shows a castle in which the ideas of the suits becomes manifest. Example: Spear Ten depicts a large castle far off in the distance, at the end of a long, uphill road.

The lesser powers also share a common theme. Cards 2 – 10 in each suit show no people. Commonly it is a landscape only, perhaps with an animal or two, and commonly a single item of the suit. For example, Sword Five is a burning village, with a single broken sword among the ruins.

Thus the reader who is unfamiliar with the legends is best off to take in the entire scenic background and how the suit emblem in question is interacting with it. (Example: Sword Three shows a bridge falling to pieces, and a sword falling from the bridge into a canyon). This gave me some difficulty with the deck when I first read with it, however I have come to appreciate the way it makes you look at a card and has helped me read better with a few of my other decks, such as the Thoth.

The Major Arcana, or Greater Powers have been nearly totally renamed with people or concepts from the legends. What follows is a list of those changes:


I found the artwork on the Majors amazing; they really brought life to some of the people from the legends. I was particularly pleased with the Lady of the Lake. I admit a few of the choices confused me, but the book helped drastically with the understanding of the cards.

The book itself was very well written, I thought. Section One contained a nice introduction to the deck, a listing of the renamed cards and court orders, as well as a seasonal, traditional tarot, and color association for each of the suits.

Section Two goes on to provide a full listing for the Greater and Lesser powers. In this section each card entry contains a description of the picture, the background (and any history associated with it), and divinatory meanings. Majors also contain Archetypical meanings. Divinatory meanings are for the upright cards only, the authors want people to create their own reversal meanings.

Second Three describes how to read the cards, providing decent information on the differences between Greater and Lesser Powers, the importance of numbers, what the court cards stand for, as well as a section for Significators and how to gauge time with cards from the deck during spreads. The section concludes with some nice words about rading in person for people and things to consider and some suggestions on how to conduct a reading.

Section Four has some sample spreads with a sample reading using each one. The only drawback I found on this chapter was the sample readings do not always use all the cards. Contained within however, we get a spread which is more or less an alternate version of the Celtic Cross, a “Mirror” Spread which helps you see how you are seen both by yourself and others, as well as a few other spreads. One which may be of note to people is the Excalibur spread which deals with lessons from previous lives.

Section Five is the final section which is a quick reference to everything talked about in Section two without all the background and history for each card.

Overall, I was pretty content with the book. I felt they could have expanded on the history of the lesser power cards as they did with the greater powers, and I would have also liked to see more complete sample readings, but I feel the book was very well written and compliments the deck nicely.

I would recommend this boxed set to anyone with an interest in Tarot and the Arthurian legends, the creators of the book and deck certainly know their Celtic legends and it becomes amazingly clear when reading the book and how that knowledge was reflected in the landscapes and personas used within the cards themselves.