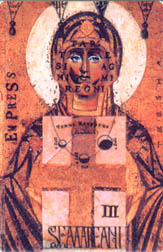 Twenty six artists created three cards each in this collaborative tarot deck, the Artist's Inner Vision Tarot. The result is surprisingly unified, despite the range of mediums from collage to illustration. 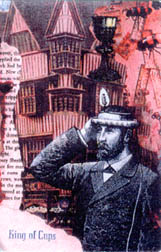 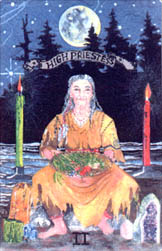 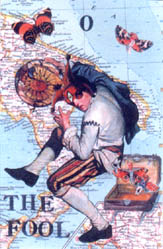 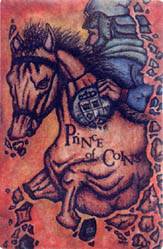 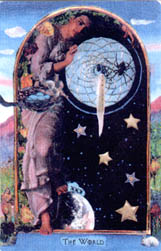 The work of many talented artists has created the Artist's Inner Vision Tarot. Twenty six artists, from tarot artists including Arnell Ando and Sarah Ovenall have each designed three cards. NoMonet, who originally had the idea for the collaborative project, wrote the accompanying book and produced the deck.

The Artist's Inner Vision deck and book are beautifully packaged. The cards come in their own drawstring bag, the material of which matches the cover of the book. I haven't seen any other decks provided with their own bag - with some a small box is provided, but with most once the plastic has been removed, it's up to you to find a container. The cloth bag is a nice touch.

The book gives a detailed explanation for each card, and, unusually, a scene from a movie that fits the card. A scene from Jerry MacGuire corresponds with the Prince of Coins and The Piano with the Queen of Cups.

The cards themselves are printed on flexible, thin card stock that shuffles easily and feels smooth under the fingers. There is a collage work on the back of the cards.

My impression of the deck that as each artist involved in the project only had to produce three cards, they were able to concentrate fully on developing those cards. So many decks have a few good cards and a minor arcana that seemed to have be rushed, but not in the Artist's Inner Vision Tarot. Almost every card is a work of art.

This is a very contemporary deck, perhaps because of the mix of modern, classical, renaissance and timeless images. I'd recommend it for a collection as well as for everyday use.

I found out about this specific tarot deck from this website. I was searching for a deck that fit into my interests of Victorian imagery, European religious elements, and detailed collages. Looking at numerous decks on the Aeclectic Tarot website, I stumbled upon this one, and it just spoke to me. I was not sure if it was for wide sale, being released from an independent publisher, but not soon after, I found it being sold at a shop in a city near where I live.

It was a little pricy, being that it would be the second tarot deck that I had ever purchased, but because it comes with a large instruction book, a matching bag, and images that I couldn’t live without, I knew that this was going to be the deck that would I use forever. But when I opened the deck, the cards were mis-cut, so each card had a bleed from another card on it. I emailed NoMonet, and they replaced my deck (requiring that I send in a few cards as proof of purchase of the initial deck) and made sure that the replaced deck was in good condition. I have nothing to say but good things about the Artist's Inner Vision tarot deck and the help that I received from Steph King (NoMonet).

The book that comes with the deck is awesome and has each and every artist who did the cards listed. The cards themselves are so intricate, and each one has something new to see, as if I missed seeing it before. I definitely have my favorite cards in the deck, but each card has something that makes it its own piece of art. This deck is very personal, and proceeds from the purchase of the Artist's Inner Vision go to help animals in need. Not only is the deck very personal, but the company that creates it is very trustable, which makes the deck even more attractive.

This deck is wonderful in every way, and I cherish it so very much. (There is even a limited edition of the deck that comes with a completely re-done book with individual colored stamped images on almost every page, but it has a hand-made cover and an improved bag. It burns me so much that I don't have the funds to afford it.) Both editions of the Artist’s Inner Vision tarot deck are masterpieces and are worth their weight in gold.