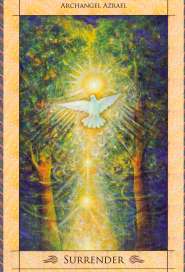 The 42 Ask an Angel cards have a variety of pretty images, with regular humans, winged humans, and winged creatures all making an appearance. Each card lists the name of the angel or archangel, and a keyword.


Card Images from the Ask an Angel Oracle Cards 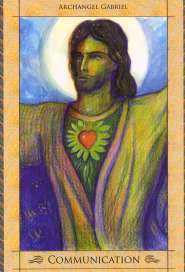 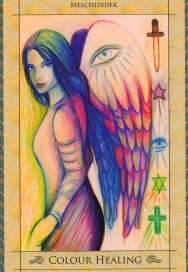 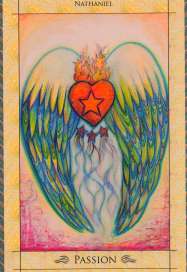 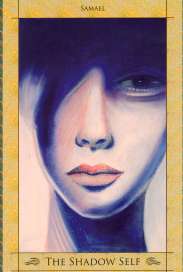 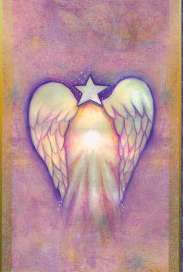 This deck has a selection of human and non-human figures, each representing an angel or archangel. In total, there are 28 angels on the 42 cards, so some angels have more than one associated card, though as with several aspects of this deck, there seems to be no guiding principle behind which angel gets more or less cards. Each card gives the angel's name, as well as a keyword.

The deck comes with a (theoretically) 124 page book (actually only really 116 pages as the rest are ads for other books/decks). The book has a little introduction from the author, describing how he let the angels inspire his artwork. Then there is an interpretation for each card, and finally a "Dictionary", giving a short description of each angel. Despite the small size of the book, and the ad space, I really like it. It gives a few spreads: a one card reading, a "four card spread" of past/present/future/outcome, a six card "elemental star spread", an eight card "rainbow chakra spread", an eight card "relationship spread" and a six card "two ways spread". The card meanings are quite inspiring, and the angel "dictionary" gives some traditional meanings and a more general way to connect to the energy of each angel.

As for the basics, the cards are on good quality, laminated stock. They are 9 1/2cms (3 3/4") by 14cms (5 1/2"), so fairly large. The backs are non-reversible, with a purple image of a winged star. The cards have a narrow colourful border down the side edges, and a pale brown border on all four sides. The actual image is separated from the borders by black lines that jut out into the borders without reaching the edges at the sides, though going all the way to the edges at top and bottom. The angel's name is in the top border, and the keyword is in the bottom border, separated from the bottom of the card by another incomplete black line.

The artwork is fairly naive. Some images are of human figures with wings, others are human figures without wings, there are quite a few close-ups of just human faces, and 5 out of 42 are entirely non-human - 2 doves, a tree with wings, a star and heart with wings (a modified version of which is used on the card backs and the front of the book), and a winged heart. There is also a balance of male and female aspects within the human images.

The use of symbolism is somewhat haphazard - there are so many cards with stars and hearts that these become almost useless in terms of a visual/symbolic reading. Of the 42 cards, 22 cards have stars, 10 have hearts, 10 have flames, 9 have spirals, 4 have crosses, and 3 have butterflies. Given that there are 9 cards with none of the above symbols, you can perhaps picture how overburdened the other cards are with them. As the artist states: "When creating the paintings for this oracle card set I tried not to hold any preconceived ideas about any of the images or what they should look like. I simply tuned out of the rational thoughts that constantly flow through my mind and tuned into a peaceful space of love and light that exists within each of our hearts, into the vibration of universal love. And in doing so, the portal of endless creative potential opens." Well, I can see the "tun(ing) out of ... rational thoughts", but the "endless creative potential" is rather less apparent.

However, please don't get me wrong - I enjoy this deck and use it often. My rational side sees its flaws, but I quite like the simplistic artwork. Many of the pictures are quite striking and joyful, and I really like the variety and yet consistency (as opposed to some decks where the images are taken from different artists and different media). And my rational side appreciates having the name of an angel and a keyword on each card, making it easy to connect to the named angel or create prayers specific to the angel(s) drawn.

So, some of my favourite images:

Ramaela - Joy - the only non-fair-skinned image, a beautiful woman of African descent with blue wings behind her and a blue butterfly at her throat. Lots of spirals and stars, and a large tear-drop shape, too. There is a luminosity to the card that I find goes well with the keyword "Joy".

Phuel - Emotion - a female angel with wings that shade from white to blue, and blue hair, surrounded by water, and with a crown of stars and a crescent moon in the background. The image is certainly evocative of the wateriness of emotions, while still feeling light.

Archangel Zadkiel - Forgiveness - veiled in turquoise, this figure has a small cross at the third eye, green eyes, spirals on skin and veil, and a bright, burning heart shining with rays of light. This speaks to me of the openness of heart necessary for forgiveness, but also of how this can take us over, becoming a spiritual moment, so that forgiving others we forgive ourselves and become more in tune with the whole universe.

Samael - The Shadow Self - I like that not all the angels are full of light and laughter. Here we see a face half hidden in shadow, looking serious yet calm. Acknowledging and accepting our shadow can make our light shine that much brighter, and bring wholeness to us.

Archangel Sandalphon - Prayer - a winged figure sits with legs crossed and hands held palms together at the chest. Above floats a star, while in front is a pond full of lotus flowers. This image feels calm and light, serene and prayerful. It's easy to "read", and can also be taken as a template of how to find an inner calm to allow connection to the divine.

Images I'm not too sure about:

The two dove cards - representing two different archangels, but the only difference lies in the colours and that one is closer up, the other further away and between two trees. And of course they have different keywords.

Melchizedek - Peace - here we see a christ-like figure with stubble, a cross on his forehead, and a chain of thorns. However, he also seems to have flames coming out of his chest hair!?!

Archangel Azrael - Completion - a figure of indeterminate gender in what looks like a hoody with stars on it, and with a star with six rivers of light flowing from its lower half. Personally, this suggests to me more a gang member with a strange tatoo than an angel.

Archangel Raguel - Conflict Resolution - a male figure with wings, wearing a t-shirt decorated with multi-coloured stars and a few spirals. I guess all the colours of the rainbow are here, one way or another, but nothing else to represent any kind of diversity or conflict resolution.

Sachiel - Prosperity - a Beyoncé look-alike with rays of light coming from her eyes, three stars on her face, an eye and another star floating in front of her. Prosperity is easy to show, be it in objects or family or happiness, but this woman isn't even smiling. If the keyword were inner light, clarity of vision, guidance or self-belief, I might "get" it, but as it is...

Archangel Israfel - Music - a male winged figure with a star at his third eye, and another in front of him. Other than the fact that he has multi-coloured hair, is there anything to suggest he is a musician? No. This would, once again, be so easy - some musical notes in the background, or a musical instrument, or a bird. But that would just be too logical!

Muriel - Home - here we see a tree with a red heart centred between wings that seem to be flapping. But, the tree's roots are nice and firm. I like the rootedness of the tree for a sense of security, which home should represent, as far as I'm concerned. And home is where the heart is. But what's with the wings? Please!

If you can suspend your disbelief, and if you work well with keywords and like this style of art, then it may be a good deck for you. And the book is well-written, informative and inspiring. For the rest...