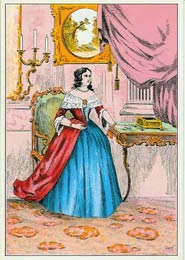 The Astro Mythological cards has 52 reading cards similar to the suits of playing cards, and 2 extra male and female cards. The deck is a Mlle Lenormand style and is based upon Greek and Egyptian mythology.


Card Images from the Astro Mythological 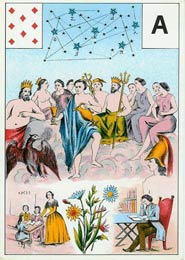 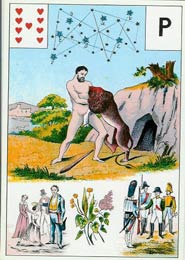 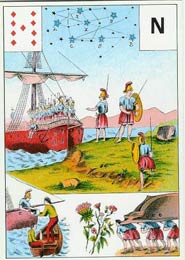 While this deck is listed on the front of the box as being "by" Mlle Lenormand, the instructions are not by her. The artist for the deck is unknown, and the date of publication is not listed anywhere on the box or in the accompanying LWB (Little White Book), which is in both English and French. The publisher is the only thing that is a known quantity! This is one of four decks connected with Mlle Lenormand, and I believe it is the only deck to contain 54 cards (52 reading cards and 2 cards that represent the person being read for - one male and one female card).

The 52 reading cards are related to the four playing card suits of Hearts, Clubs, Diamonds, and Spades. The number one through ten, and the Jack, Queen, and King from each suit appear on the cards, in the upper left hand corner, as a small picture. In the middle of the upper half of the card is a diagram of a constellation of stars. In the upper right hand side of the card appears a letter from the alphabet. The picture under this shows a scene from mythology, an under that a picture of varying types of flowers, with pictures on either side that elaborate on the symbolism and cartomantic meaning of the card.

The 52 cards of t his deck are divided into five categories:

1. The Conquest of the Golden Fleece, which represents business, consists of the Nine and Ten of Diamonds; the Ace, Four, Nine, and King of Clubs.

2. The Trojan War, which represents the right of the strong over the weak, consists of the Five, Six and Ten of Clubs; the Two and Nine of Spades; the Jack of Diamonds; and the Six, Seven, and Ten of Hearts.

3. Hermetic Knowledge, which represents marriage, consists of the Seven of Spades; the Three of Cups; the Four and Eight of Clubs; and the Six, Seven of Hearts.

5. The Signs of the Zodiac, which represent the sequence of time, are:


There are very explicit instructions on how the game is to be played. The consultant (Seeker) must shuffle the deck themselves, deal the cards out on the table face down, and draw an odd number of cards face up, which will represent the storyline of the reading. The cards are read in a different manner depending on whether the consultant (Seeker) card is face up or does not appear in the reading.

The LWB (Little White Book) gives an example for the five card draw above, talks about how it would be read with the consultants card, talks about how it would be read if both the masculine and the feminine consultant card showed face up. An explanation is given showing how to set up a Full Card reading, which uses all cards: ten rows of five cards, and one row of four cards.

There is also a five card spread shown that answers the five main questions that the five categories of cards represent:

1. Business 2. The Right of the Strong Over the Weak 3. Marriage 4. The Unexpected 5. Sequence of Time

The LWB contains a section where an explanation for each of the cards is given. From the book:

Represents: Man of knowledge who gives good advice.
L.I.: (Phineus, King of Thrace showing the Argonauts the road they should follow): Ask the advice of an old man.
S.I. right: (Rocks and a dove): Precautionary measures should be taken before leaving on a journey.
S.I. left (Also rocks and a dove): Do not journey by plane.
Flowers: Risky plans which nevertheless succeed because of advice given by a rich man.

Under the section on talismans, it is indicated that certain cards show the fate of the consultant (Seeker) to be irrevocable. It is suggested that talismans may be used to counteract the influences of these cards (the Jack of Diamonds; the Two, Six, Eight, and Nine of Spades; and the Six and Ten of Clubs). Talismans are shown with their corresponding cards, and it is suggested that they be copied out and carried with the consultant (Seeker).

Of the four decks under the name of Mlle Lenormand, this is the most difficult to work with. It contains references to geomancy, flower symbolism, numerology, and the meanings of letters and talismans. The stories in the cards are from Greek and Egyptian mythology. The use of the deck is given as understanding the past, analyzing the present, and predicting the future.

The techniques for reading the cards are clearly explained, but they are time consuming, and one would have to pay strict attention to them. This is a deck that could be used for reading by someone who was a student of mythology, and of the esoteric, and understood the nuances of the cards. Other than that, while I find the deck fascinating, I see it more in the collector category than the user category.