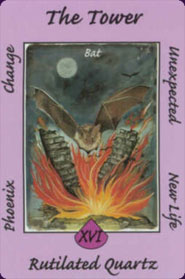 A wholly Australian tarot deck, each of the 78 cards in the Australian Animal Tarot has a different animal, bird, reptile or insect illustrated in lifelike detail. A gemstone and four keywords are also associated with each card. Suit elements have also been changed - Wands are Earth, Swords are Fire and Pentacles are Air. 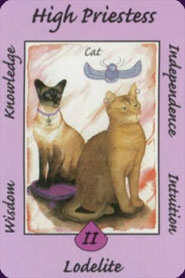 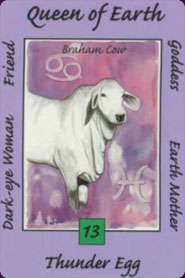 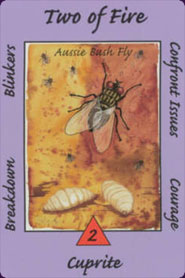 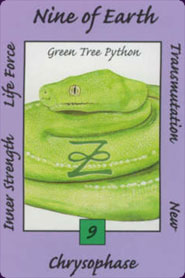 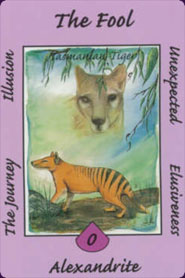 The Australian Animal Tarot is a 78-card deck by Ann Williams-Fitzgerald, first published by US Games Systems in 2001. The deck can be purchased separately or as part of a set with the book Wisdom of the Australian Animals by authors Ann Williams-Fitzgerald and Karen Osborn. The deck is currently listed as unavailable by most retailers, but not classified as out of print as of December 2007.

The artwork is simple and engaging, soothing to the eye and a catalyst for the imagination. Each card has a pale purple background with a hand-drawn and colored image of an animal in the center, done by artist Tracy Hinschen. The title of the card is at the top, the name of each animal at the bottom, with four keywords and a crystal association for each card around the sides. The card backs feature the Southern Cross constellation, most prominent in the Australian sky, and are non-reversible. This deck uses the numbering system that most readers are familiar with, Strength being #8 and Justice #11. The cards are 2 7/8 x 4 Ľ, sturdy and durable. The language on the cards is English. The deck includes a 47-page instruction booklet with only “key sentence” meanings for each card. There is a table in the back for the animal and crystal associations for the cards and a section with a few sample spreads. This booklet is more than enough to use the cards straight away, even for beginners, but the bulk of the information for this particular deck is in the book Wisdom of the Australian Animals. However, the focus of this deck is more on the animals and the crystals than Tarot.

This is a rather unique deck in that it is more Oracle than Tarot, but set up as a normal Tarot deck. The Major Arcana names are still there, but the usual figures are completely gone, replaced by the various animals indigenous to Australia that have been assigned to represent the archetypes of the Major Arcana. The Fool is represented by the Tasmanian Tiger, The Magician is now the Australian Raven, and the High Priestess has become a cat. The Minor Arcana is broken up into the suits of Earth, Air, Fire, and Water, with the court titles still remaining the same. However, the suit associations are a bit different. In this deck, the suit of Earth is related to the suit of Wands, Fire is related to the Swords, and Air is related to the Pentacles or Coins. Only the suit of Water retains its traditional link to the Cups. The crystal associations for the cards seem to be a matter of preference by the author; some are obvious choices while others are little harder to figure out why the author chose that particular stone. For example, the Nine of Water represented by the Humpback Whale is associated with Aquamarine, the Ace of Fire represented by the Tasmanian Devil is associated with Red Tiger Eye, while the Ace of Air represented by the butterfly is associated with Malachite, a stone usually more associated with Earth rather than Air. Each suit still has the fourteen cards usually found, the pips Ace through Ten and the court cards of King, Queen, Knight, and Page, with each represented by a different animal and crystal.

The differences in this Tarot system may be a little confusing at first, but the cards really do speak for themselves with a little practice. It may be helpful to ignore the Tarot associations at first, just using the deck in Oracle fashion rather than Tarot, until you get familiar with the cards. After some time spent with the deck, the reader will begin to see the patterns emerging that still link the deck and its furry images to the traditional Tarot. Both beginning and advanced Tarot students will enjoy this deck if approached with an open mind and a love of animal wisdom. The guidance the cards offer has been reported as uncannily accurate from the very first reading, but offered with a gentler wisdom than most Tarot decks usually display, honest and direct. Practitioners of Shamanism or Druidry will find this deck appealing, as will basic animal lovers the world over.