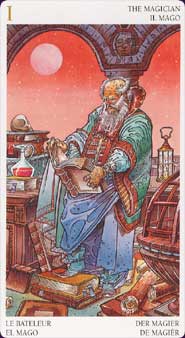 The Avalon Tarot is an Arthurian-themed tarot, but set in a fantasy-medieval world. The artwork is strongly coloured and reminiscent of comic books.


Card Images from the Avalon Tarot 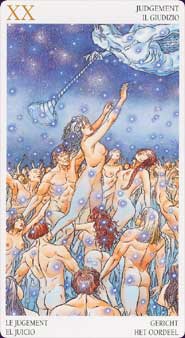 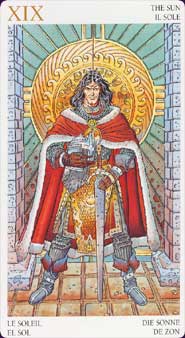 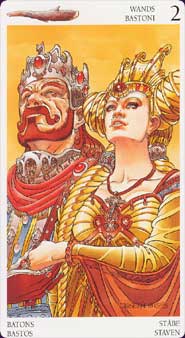 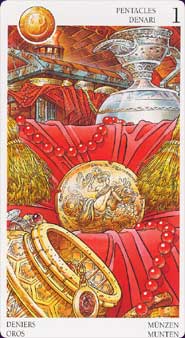 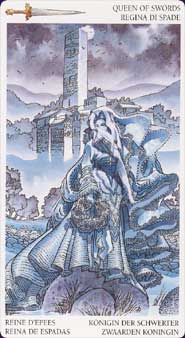 This is a beautiful, highly detailed deck of 78 cards (22 Major and 56 Minor Arcana).

As the name suggests, these cards are based on the Arthurian legends. The Magician is Merlin, the High Priestess is Morgan, the Empress is Guinevere and the Emperor is Arthur, etc. I particularly like The Tower card (LWB: constructed by Vortigern) which depicts a knight approaching the forbidding tower surrounded by bare trees artfully depicted in black, browns, purple and bloody red.

The suits are Pentacles, Chalices, Wands, and Swords. The names of each card are also printed in five other languages (the deck is published by Lo Scarabeno and distributed by Llewellyn).

The style has a very detailed comic book look to it (and I do not mean this in a negative way) and the colors help evoke the right mood and always seem appropriate for the card depicted. The cards as a whole do not overwhelm you when you look at them for extended periods of time.

Contrary to most decks, the cards do not necessarily have the same number of wands, pentacles, chalices or swords on them as the pips would indicate. For example, the seven of pentacles depicts a woman lying in a boat (the LWB tells you that this is a depiction of the "sacrifice of the lady who never lied") In this instance, there are NO pentacles incorporated into the picture on the card. However, to aid the reader in quick recognition, all cards have a depiction of their symbol in the upper left hand corner and the number (Arabic) in the upper right hand corner. The Major Arcana have their Roman numeral printed in the upper left where the pip cards have their symbols.

The faces on all of the characters are detailed and individual. They all have actual expressions that evoke responses from within (not just all the same indistinct faces with different colored hair).

The LWB explains which Arthurian legend each card portrays and gives divinatory meanings.

In a reading, you will actually need to take some extra time and look at the cards carefully (which I believe is a good thing) rather than just noticing the same old Rider-Waite card and immediately plugging in a definition by rote (Don't get me wrong, the Universal Waite is the deck I use the most, and I like it; but even that deck should be LOOKED at carefully).

In this deck I found it to be easier to see what is happening in the cards than in the somewhat fuzzy "Legend the Arthurian Tarot" deck. I attribute this quality to the deft and detailed pen work of the artist, Joseph Viglioglia.

If you enjoy the legends of King Arthur, or if you just want a deck that will make you actually LOOK at the pictures to understand (or divine) their meanings (which we should always be doing anyway), and perhaps a deck that will also give you new understandings and insights into some of the cards, then you would probably enjoy owning this deck. I would rate it four stars.

I've had the Avalon Tarot on the shelf for a while, but never quite got around to reviewing it. It's a 78-card deck from Lo Scarabeo, published in 2001, with an Arthurian-inspired theme and art by Joseph Viglioglia.

The premise for the Avalon Tarot is to bring back "the magical and mysterious charm of the Tales of King Arthur through 78 archetypal images, each referring to the King Arthur myth and legendary Avalon." Artwise, this deck has quite a different feel to the other published Arthurian-themed tarots. Rather than cool colours and misty art. Viglioglia's art style has sharp, detailed line drawings coloured in strong red or blue hues. Reminiscent of comic book art, it also has a seventies science-fiction feel.

In symbolism the cards draw the most from the French tradition. Of the majors, some still retain obvious influences - such as the Magician, Emperor, Empress, Hierophant, and Hermit. Others are very different from normal, and to me seem chosen for aesthetic reasons rather than tarot usefulness. However, the booklet does address this issue and provides a paragraph explaining the image as well as giving divinatory instructions. Examples of the text given for a major and a minor card are:

I. The Magician, Merlin: Son of a woman seduced by a devil, he was saved by the goodness and compassion of the woman who baptised him; his afterlife nature allowed him to see the future and he initially becomes Uther's councillor and then his son's, King Arthur. Meanings: spirit of initiative, ability, shrewdness, diplomacy, rejection of all suggestion and prejudice.

4 [Wands]. The Round Table. Company of knights instituted by King Arthur on the advice of Merlin. It was the third table commemorating the Trinity following that of the Last Supper and the Grail. It is round signifying the roundness of the world as well as representing the equality of all those seated. This card represents alliances which lead to the end of difficulties and a new beginning.

The minor arcana cards are illustrated in the same comic book style as the major cards, but for the suit element in the top left hand corner. The backs of the cards are non-reversible with an upright, single-toned design.

With its fantasy-medieval style of artwork and the somewhat macho feel to its cards, the Avalon Tarot is a different slant on the Arthurian legend and Grail myth that should appeal most to male tarot readers and sci-fi fans.