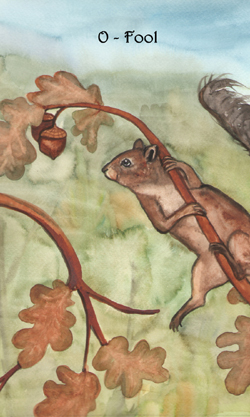 The Badgers Forest Tarot is the fourth deck from Nakisha, with 78 borderless cards illustrated with animals in their natural surroundings. The major arcana feature deer, bison, chipmunks, bears and more. In the minor arcana, badgers are swords, foxes are cups, rabbits are wands and crows are pentacles. The deck is self-published by the artist. 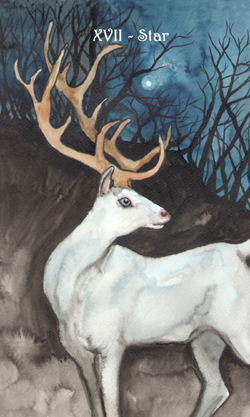 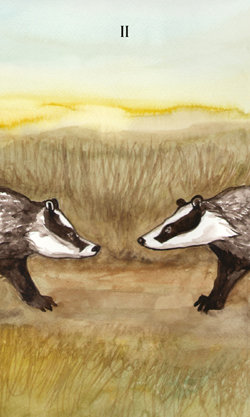 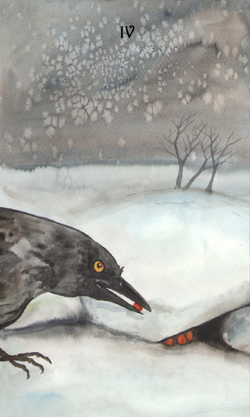 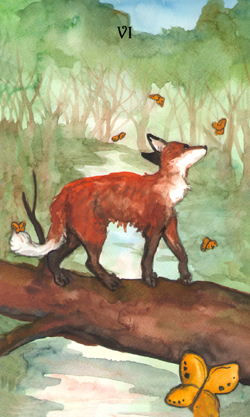 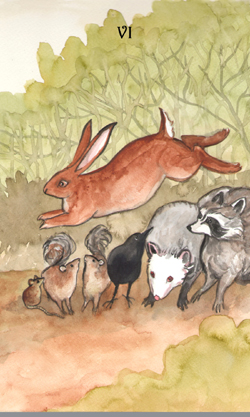 The Badgers Forest Tarot, published independently in 2013 by Nakisha van der Hoeven and available in her Etsy shop, is a deceptively simple deck. Its cards are beautiful watercolors showing animal scenes. The cards are borderless, the cardstock is smooth, but not high-gloss, and on the thin side, but flexible and pleasant. The card backs are cleverly reversible, with an image of a tree trunk whose roots and top are indistinguishable. The same tree appears on the World card (XXI).

There is no LWB but one page of card explanations, short and to the point. I don’t think one would need more to read with the deck, especially if you take the time to get to know it better. The deck’s structure is classical tarot: 21 trump cards showing a wide range of animals, and four suits, each with animals that embody the qualities of the suit.

The minor cards have neither suit symbol nor suit name, only a Roman numeral (in black or white); the majors show their title along with the Roman numeral and the court cards their rank. The font used is decorative but unobtrusive.

At first sight, cards without suit symbols may confuse the reader – but in the spirit of this deck, it makes sense. This deck liberates you from convention and encourages you to use your intuition. It transports you to a real forest where you have to find your way by interpreting the signs, traces and behavior of the creatures around you.

Some of Nakisha’s choices for the majors are unexpected and interesting: Justice (XI) is a hound, nose on the ground, completely focused on its search. In the background, we can see the silhouettes of the animals this dog may be hunting for: deer and rabbits. This is not the traditional contemplative figure of Justice, distributing her virtue from a throne, but an active, involved kind of justice. The hound is an outsider in the forest, a bridge between the world of humans (invisible in this deck) and the laws of nature. That’s a thought provoking choice. The animal kingdom is not just in the abstract way we like to define as justice. So on whose side is justice – on the side of the hound or the rabbit?

Another interesting choice is the badger on Judgement (XX). We see only its face in profile and at first, the picture is puzzling. How does this badger…? But then you see the smoke in the distance. The badger is alarmed and has received its wake up call. Now the animal is faced with mortal danger and has to make important decisions. The inner tension is tangible.

These cards imply a story which makes them easy to read, and they give new angles on well known tarot archetypes. Other cards are more obvious choices – a powerful bear for the Emperor (IV), an intelligent raccoon for the Magician (I) and a wolf outlined against the moon for the Moon (XVIII). They all convey powerful feelings and are painted expressively with a certain cuteness factor but without cuteness overload.

The choices of suit animals for the minors are interesting and unusual, too. Foxes appear in more than one nature-oriented tarot deck and usually represent Wands – their color invites the association with Fire, and they are dynamic animals. But in the Badgers Forest, foxes represent Cups. Nakisha sees them as emotional, passionate and mysterious animals, and she paints them beautifully, usually with some red-brownish hues in the surrounding landscape.

The 4 of Foxes/Cups shows a fox sleeping under a tree while the weather is getting colder – seemingly unable to decide where to turn to, closing its eyes to the inevitable. The 7 of Foxes/Cups is another expressive card of a fox sitting at a crossing. It will have to decide where to go, and I have the feeling it won’t follow one of the existing paths but run off into the field. On the 6 of Foxes/Cups, a fox balancing dream-like on a tree trunk over water lead by butterflies, is maybe the most evocative card of this deck. (It also makes me want to sing Hakuna Matata because it reminds me a bit of the scene of Simba growing up…)

The badgers represent swords, fierce, active animals that don’t shy back from confrontation. Is there are reason for the appearance of a “sword-based” animal on the Judgement card? It seems there is not. This decision somewhat subverts the classical tarot structure – seen next to each other, the badger on the major doesn’t seem stronger or more impressive than the badgers that appear on the minor cards. It’s a matter of interpretation and intuition to sense the differences. After working with the deck, I began to appreciate this web of animal associations that evoke the echo of other cards.

Crows embody the Pentacles suit – clever, possessive and territorial, in Nakisha’s words (I can’t remember where I read her explanations about the animal suit choices, and I jotted them down on the little white paper that goes with the deck). This is again a counter-intuitive choice at first – crows are birds, their element is the air. Why not hamsters or squirrels for the Earth suit? Or badgers, animals that live in burrows?

However, there is inner logic with Nakisha’s choices, and when you decide to read the cards themselves and forget the neat categories and associations, the deck works well. Pentacles have here a strong competitive and communicative side which is different from other decks but interesting. They’re pragmatic – and the cards show it. And the crows do come down to earth when there are cherries or berries to pick up!

3 of Crows/Pentacles: a crow putting finishing touches to a nest, in the background a beautiful sunset over the sea. You can feel the inner pride of the crow but also its efforts to finish before the night comes. A touch of humor emerges in several cards, among them the 8 of Crows/Pentacles where a crow watches most interestedly a bear plundering a bee hive in a tree. You can see that the crow fully intends to participate in the bear’s sweet success and learn from it whatever possible.

Another unexpected choice is rabbits for Wands. Nakisha published a rabbit tarot earlier and her rabbit paintings are beautiful. I think she has a special love for rabbits, and all the rabbit cards shine. She characterizes these animals as as intelligent, dynamic and active. I like that the artist doesn’t present rabbits as preys – passive – feminine – water – Cups and foxes as predators – active – masculine – fire – Wands. It would have been easy to use these chains of association. Many modern decks subvert gender and ethnic stereotypes openly. Badgers Forest puts these categories very gently aside and gives us the chance to read every animal scene with fresh eyes.

A bit different from the other cards are the court cards. Their names are written in the bottom left corner of each card. Pages are represented by young animals (called Kit or Chick) while the Knights show the suit animal riding on another animal. The Queens and Kings are shown in close-up with soulful faces. In these cards, the anthropomorphic quality of the cards is strongest but not strong enough to make me uncomfortable. You can hear their voices if you focus on the cards – these are person cards in a deck without humans, and done very well.

The rabbits and foxes escaped traditional stereotyping, but the Kings and Queens did not. The Kings convey power, the Queens nurturing beauty. Well, how would we otherwise have recognized them? The artist had to take into account our concept of masculine and feminine.

I like the knights best of all court cards. The combination of suit animal and its mount is fascinating. The Knight of Crows/Pentacles rides on a wolf, the Knight of Rabbits/Wands on a deer. The energy of the smaller animal works with the energy of the stronger, larger animal that carries it.

The Badgers Forest tarot sets stories in motion before my eyes, a bit like illustration in children’s books. This is meant as a compliment; I value good picture books very highly because they work with the imagination of a child, without all the layers of convention we adults have learned. It’s a story telling deck, easy to read and beautiful. Badgers Forest relies on our ability to connect with nature, with colors and with our tarot intuition. It does so without esoteric additions, glyphs and symbols which makes it non-frightening choice for people who fear or dislike traditional tarot iconography.

I recommend Badgers Forest as lovely, deeply intuitive, easy to read deck with an evocative style completely of its own; a glimpse into another world that’s so close to us and yet unknown.