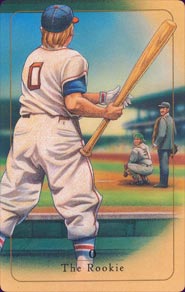 The Baseball Tarot is a quality Tarot cards-and-book set with 78 borderless, oversized, and very glossy cards. The major arcana have titles altered to fit the baseball theme, while the minors are divided into suits of Mitts (Cups), Balls (Swords), Bats (Wands), and Bases (Coins), each with twelve suit cards and two courts (Coach and MVP). It's much, much better than the other Tarot of Baseball.


Card Images from the Baseball Tarot 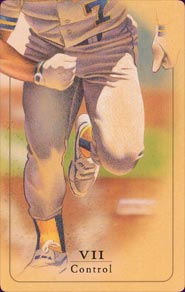 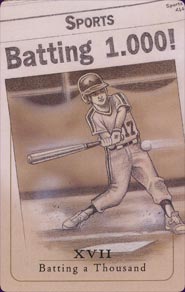 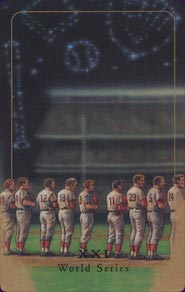 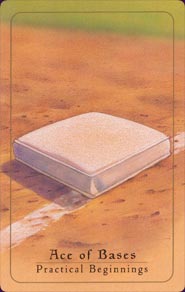 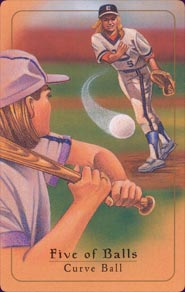 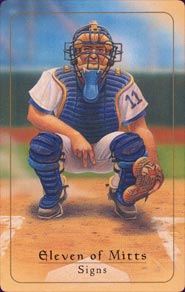 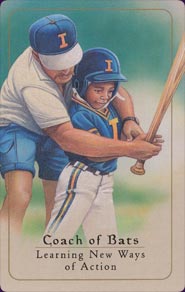 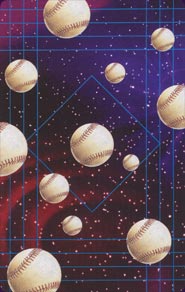 Baseball Tarot is a 78 card deck which, as its name suggests, brings the all-American world of baseball to Tarot. The two might seem like strange bed-fellows at first. Yet as a sport which is stepped in both metaphor and myth, the two make a surprisingly good pair. To my knowledge, this is the one of three published decks which marries the two (see Tarot of Baseball and the Marseille-inspired Tarot de Cooperstown). In my opinion, this is the strongest of the three, as it manages to create a themed deck without falling into the trappings of many novelty deck.

The deck swaps out traditional suits for more appropriate symbols. Wands become Bats, Cups are Mits, Swords are now Balls and Pentacles, Bases. In an unusual move, Pages and Knights are labelled as card 11 and 12 respectively. While some might object to the unusual numbering on esoteric grounds, or lament the loss of identifiable “people” cards, they do still maintain the general feel of the Rider-Waite deck, but solve the difficulty beginners often face of interpreting court cards. Queen and King become Coach and MVP, with Coach’s dealing with learning aspects of the suits, and MVP with accomplishment in that suit. Minor Arcana cards are given titles, making it immediately clear what aspect of Baseball the card is referencing.

A quick note on gender: In a deck that could have easily only depicted men, the cards do a good job of including women throughout, though it is a bit disappointing to see cards such as the Empress replaced with a masculine equivalent. Still, the inclusion of women is appreciated.

Card stock is glossy, but very sturdy. The oversized card size will be difficult to shuffle for smaller hands but lend themselves well to display for daily draws. The art, unfortunately, hasn'’t aged well and both colouring and illustration style is decidedly stuck in the 90s. Those who are looking for an aesthetic experience can move along. But those are looking for a practical, down to earth deck will be pleasantly surprised at the depth of this deck. The recommended reading in the back of Mary K Greer, Rachel Pollack and Gail Fairfield give you an idea of what kind of reading the authors had in mind. Asides from listing the occasional astrological correspondence, the deck steers clear of any esoteric associations. The cards are approached as a tool for self-development and practical advice.

As someone who very rarely uses spreads in LWBs or guidebooks, I was pleasantly surprised at the simplicity and practicality of the spreads. For example, the two card spread of Pitch (what you are being dealt) and Swing (how you should act) is ideal for every day, mundane questions which more complicated spread would simply obfuscate – sometimes you don’t need to know what the unconscious mind is thinking, or what are the environmental factors are, you just want to know what your next step should be! The book also offers its version of the Celtic cross in the form of the baseball diamond, which sets aside simplicity but could still prove a viable alternative to the classic spread.

Far from simply plastered on a theme, the Baseball Tarot does an excellent job of both drawing from the vast metaphors of baseball to illustrate and expand the traditional associations of the Rider-Waite. Some are obvious pairings, such as The Umpire as Justice, or the World Series for (you guessed it) the World. Others are not so obvious, but still work surprisingly well. I was initially left scratching my head at the use of the Catcher for the Moon. And yet, as the book points out, the catcher is privy to a different perspective of the baseball diamond from all other players on the field as he is located behind home plate. In addition, the catcher is the hub of a secret network of communication, exchanging signs with the pitcher. They must also constantly draw on their gut feeling to make the right call. The more traditional keywords for the moon of mystery, distorted perspective, and intuition are beautifully hidden within this choice.

Where the Baseball Tarot really shines is its approachability. As the authors point out in the guide book, baseball metaphors have crept into our everyday vocabulary, so that even people who are less familiar with the sport will be able to seize onto its messages with ease. People might be puzzled when they encounter the 6 of Wands or 5 of Swords, but deal them “Home Run” and “Curve Ball” and the querent will be immediately nodding their head. Down to earth messaging make the cards easy to relate to everyday life. The Baseball Tarot is non-threatening, without sugar-coating. For example, replacing with Death with Retirement, speaks to the same themes of endings, of starting a new life and the fears that might accompany such a huge transformation in your life. If you ask the cards whether your business will be a success, and you get “Strikeout” (Nine of Swords/Ball) you'’ll know right away that the answer is no! These cards would be ideal for those who might usually approach Tarot with trepidation or fear but might still be open to be of guidance.

With its 324 page guide book, and titles printed directly on the card, the Baseball Tarot could also serve as a stellar beginner deck. The guide book takes a refreshing no-nonsense approach, with card descriptions that are easy to grasp without sacrificing depth. This deck will be a delight for those, such as myself, who have a love for both tarot and baseball, and would like to introduce fellow baseball fans the cards. It’s a deck that I see myself turning down when I have a question about everyday affairs, for it’s straight-forward messages and practical advice.