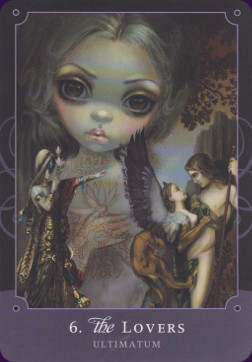 The Beautiful Creatures Tarot has been re-published here in a revised and updated second edition. The set has 80 gilded cards (including two wild cards), each with artwork by Jasmine Beckett-Griffith chosen to suit the card. 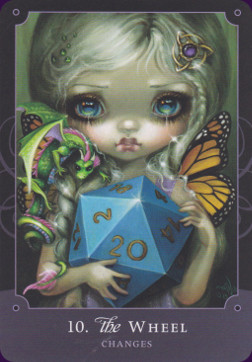 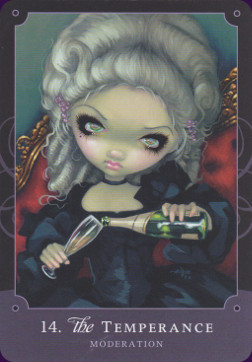 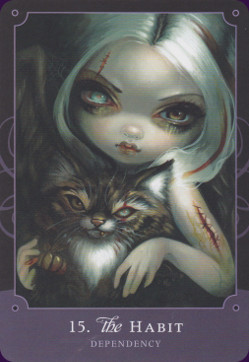 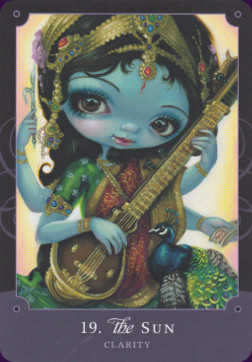 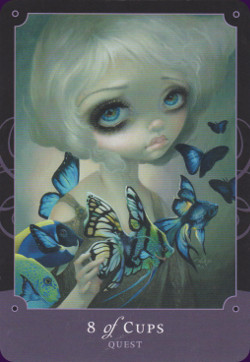 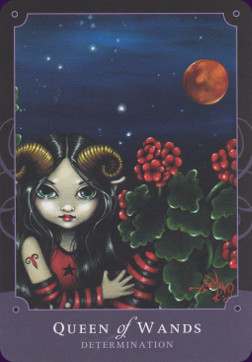 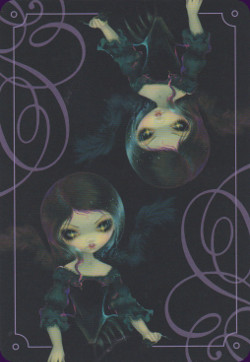 Jasmine Becket-Griffith is a prolific artist who specialises in fantasy and Gothic artwork. Her illustrations have appeared in several Oracle decks, many books, assorted merchandise such as jewellery and T-shirts, and various co-branded Disney products. She is most famous for her illustrations of waif-like girls with disproportionately large heads with huge, glistening and expressive eyes.

The Beautiful Creatures Tarot has gone into its second edition with some notable and welcome changes. The original deck, though lovely, featured many significant departures from traditional tarot concepts, and as a result, was somewhat confusing. Originally, The Fool was titled The Explorer, The Magician was known as The Mage, The Hierophant was The Hierophantess, Strength was Fortitude, Justice was Equilibrium, The Hanged Man was The Swinging One, Death was Transformation, Temperance was The Mediator, The Devil – The Addiction, The Tower – The Unexpected. In addition to this Court cards were renamed - with the Pages becoming Elements; and Knights, Queens, and Kings named after the signs of the zodiac; and the Minor Arcana suits were identified as Fires, Waters, Airs, and Earths. Two additional wild cards were included – 'You Are One’ and 'The Supernatural’.

The illustrations - not custom tarot artwork but rather pre-existing paintings which seem to fit nicely with traditional tarot concepts - coupled with the new titles of the cards made the deck somewhat challenging to work with. Mercifully the second edition deck has reverted to traditional tarot titles for Major and Minor Arcana… more or less. The Devil remains absent and has been replaced with a similar concept – The Habit; The Tower too has been banished to be replaced with The Decadence; and wildcard ‘The Supernatural’ has been re-titled The Paranormal. New images have been inserted for The Lovers, The Wheel, The Habit (formerly The Addiction), and the 8 of Cups.

While it is obvious that these images have not been created specifically for the tarot deck it does not make them any less effective. The Beautiful Creatures, after which this deck is named, are strange and potent. The young women veer between dewy eyed innocence and crazy, black-eyed malevolence, and are surrounded by the most amazing mis-en-scene: skeletons, pumpkins, Cheshire cats, dinosaurs, butterfly-winged goldfish, the Shroud of Turin, flying seahorses, dragons are all part of this delightfully surreal world.

This is an 80-card tarot deck, with 22 Major Arcana, 56 Minor Arcana, and two wild cards. The Major Arcana follows A E Waite’s titles and ordering, while the minor Arcana is divided into four suits – Cups, Wands, Swords, and Pentacles. Each suit consists of 10 number cards and 4 Court cards named Page, Knight, Queen, and King. Wildcard 'You Are One’ represents the need for self-acceptance and the need to show compassion and love for oneself. Wildcard 'The Paranormal’ represents that which is not supposed to be uncovered, discovered, recovered or otherwise known. Some things are better left alone.

The cards measure 88 x 125 mm which makes them somewhat larger than many commercially produced tarot decks, more akin to an oracle deck in both breadth and length.

The card stock has changed from the original production – it is now slightly heavier and less flexible, with a toothy and slightly crisp matte finish. This certainly facilitates easy handling and shuffling, preventing the cards from sticking together or clumping. Unlike the first edition deck this one has a metallic purple finish on the edges of the cards which coupled with the black and puce border gives this deck a decidedly Gothic feel.

The print quality, as with all Schiffer card decks, is exceptionally good. The images have clean, crisp lines with no misprints or colour bleeds. Jasmine Becket-Griffith is a traditional painter who works in acrylics. Her palette is broad and given that her subject matter is quite fantastic her subjects are rendered in colour schemes that vary between dewily realistic and extravagantly unreal. It is worth noting here that the Kings, Queens, and Knights have been painted in an entirely different style to the rest of the deck – it is a little simpler and more comic book in style, which contrasts unsettlingly with the lavish classical style that the bulk of the deck is painted in. Each image is framed with a thin lavender line inside broader dark borders. Numbers, titles, and keywords are printed on the border beneath the image. The design on the back of the cards – mirror images of gorgeous little gothlings – is reversible.

The deck comes packaged in a solid cardboard box decorated with vivid images from the Beautiful Creatures Tarot. It features the beautiful attention to detail and presentation that has become synonymous with Schiffer Publishing – ribbon loops to open the box, and women hinges to hold the lid in place, magnetic fasteners to keep the box shut. The cards are seated in a double well with the guidebook placed on top. The box is sturdy and made to withstand time and travel. Although it is quite weighty it is still slim enough to slip into a tote bag or backpack without taking up too much space.

The 162-page guidebook is written by the deck’s conceptual originator J R Rivera, and is about 10 pages longer than the original guidebook. In direct contrast to its predecessor this book is printed on heavy, glossy paper and features full-colour illustrations of each card. The book opens with a forward from tarot legend Barbara Moore, then goes on to introduce the deck and outline some of its notable features. It also introduces the beautiful creatures themselves. We then move into a general introduction to tarot itself and some specific instruction in using and reading the cards. 16 layouts are included, from a one card draw all the way up to complex 12 card past life readings and astrological layouts. As a bonus and astrological getting-to-know-you game is included.

Each card has its own page with a full colour reproduction of its image. The Major Arcana chapters open with a quote in which the Beautiful Creature addresses the reader/Seeker directly, followed by a keyword, a description of the image and its relevant symbolism, and finally divinatory meanings for cards in both upright and reversed positions. The Minor Arcana is divided by suit, and likewise the Beautiful Creature speaks directly to the Seeker, followed by keyword, description and upright and reversed meanings. While the images are non-traditional the meanings assigned to the cards certainly are – the divinatory meanings are positive in outlook yet acknowledge that life can be difficult, sad, and challenging. This deck tends to focus more on the interior life than the material life of the Seeker, and to that end the advice is kind and uplifting. There are several ruled pages at the end of the book for your notes.

If you are a fan of Jasmine Becket-Griffith’s spectacular artwork then you are going to want to add this deck to your collection. If you have the original Beautiful Creatures deck you may find that the changes wrought in this edition are sufficient to warrant buying a second copy. If you are looking for a tarot deck that is modern, combines Goth and fantasy sensibilities, or is just plain eccentric then this is the deck for you. If you liked the original deck but found it a little confounding to use, you may well find this this new, improved version is just the thing you are looking for. Charming and beautiful, this deck is an ideal gift to yourself or a tarot fan you love.