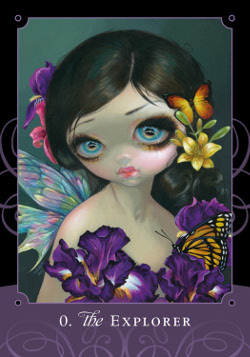 The Beautiful Creatures Tarot is a collaboration between author J.r. Rivera and oracle illustrator, Jasmine Becket-Griffith. This 80 card tarot (it has two extra Wild cards) has her typically big eyed, doll-like characters set in a mystical world. 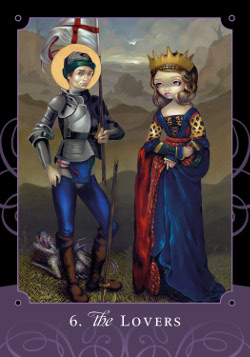 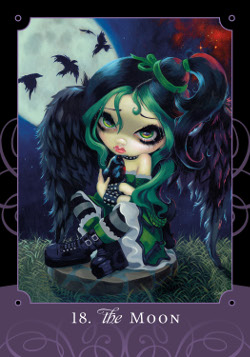 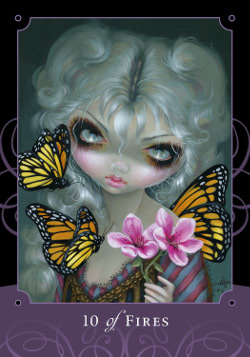 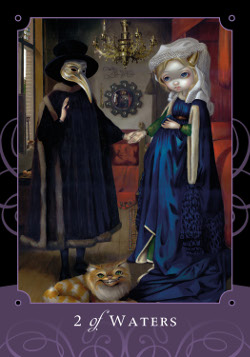 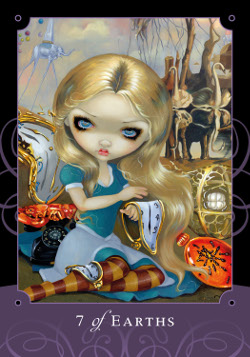 Schiffer Publishing may be a relatively new player on the tarot publishing scene, but they have quickly become synonymous with exquisitely presented, outstanding decks.

The Beautiful Creatures Tarot is the latest offering from artist Jasmine Becket–Griffith, who has (in partnership with Lucy Cavendish) illustrated the Myths and Mermaids, Shapeshifter, Les Vampires, and Shadows and Light oracle decks. Her artwork focuses largely on otherworldly young women with enormous, expressive, glistening eyes – and can be seen not only in Oracle cards, but posters, statuettes, clothing, jewellery, fashion items, and a plethora of Disney goods.

The deck functions as a regular tarot deck, but encourages the user to invite the mystical beings depicted on the cards into their lives, to deliver messages and give assistance. This assistance is generally limited to advice and self-discovery. Essentially they are here to help you, the seeker, prevent past mistakes from being repeated and to help you manifest a brighter future.

This is an 80 card deck, with 22 Major Arcana, 56 Minor Arcana, and two wild cards – You Are One, and The Supernatural. Several Major Arcana have been renamed beginning with The Fool becoming The Explorer, The Magician – The Mage, The Hierophant – The Hierophantess, Strength – Fortitude, Justice – Equilibrium, The Hanged Man – The Swinging One, Death – Transformation, Temperance – The Mediator, The Devil – The Addiction, The Tower – The Unexpected. Additionally the Court cards had been altered – the Pages have become Elements and the Knights, Queens and Kings replaced with signs of the Zodiac. The Minor Arcana suits are Fires, Waters,, Airs and Earths, but their divinatory meanings coincide with Wands, Cups, Swords, and Pentacles. ‘You Are One’ specifically addresses the need for the Seeker to accept and love themselves. ‘The Supernatural’ is an interesting and valid concept – there are things that *should* remain a mystery or be left well enough alone.

While the images do not have any recognisable traditional scenes or symbolism the fundamental messages and meanings have been retained. It is clear that the images have not been created specifically for this tarot deck, but this does not make them less effective. In fact the Beautiful Creatures are strange and potent; and hands–down the most surreal tarot deck I have ever seen. While the young women veer from dewy-eyed innocents to crazy-eyed malevolents, it is the mis-en-place that makes these cards somewhat bizarre. Skeletons, pumpkins, Cheshire cats, dinosaurs, butterfly–winged goldfish, the Shroud of Turin, flying seahorses, dragons all appear in the cards, along with settings that travel from sweet dreamscapes to post–apocalyptic wastelands.

The deck measures 90 x 127 mm making it a little broader than regular tarot cards, but not impossibly large. The card stock is excellent quality, flexible, smooth, with a high gloss finish. The cards shuffle well without being too slippery. The print quality is exceptional, with clean clear images and vivid colouring. Jasmine Becket–Griffith is a traditional painter who works in acrylics – her palette is vast; skin tones are natural, backgrounds can vary from realistic to high fantasy, and many of the animals and flowers are rendered in brilliant colours. These images are idiosyncratic, wholly original, and instantly recognisable. The print on the back of the cards, two Medusas, is reversible.

The guidebook by J. r. Rivera is 152 pages of detailed information. There is a basic ‘Introduction’ which gives an overview of the cards, and ‘About These Beautiful Creatures’ which explains the concept and purpose of this deck. 10 divination spreads are included – a yes/no draw, several 3 card spreads, several 5 card spreads, and two 7 card spreads. These cover readings about others, for self-knowledge, 30 day outlooks, and quick answers and insights. An image of each card is reproduced in black-and-white along with the following information:

A few lines in which the Beautiful Creature itself addresses the Seeker directly. ‘Keywords’ – a few words that summarise the essence of the card. A paragraph describing what is happening in the card, the emotions and intentions of the people and creatures. An Upright meaning and a Reversed meaning are also included – these adhere closely to generally accepted traditional meanings.

The deck comes in a solid cardboard box decorated with vivid images from the Beautiful Creatures Tarot. It has the usual stunning presentation that comes with Schiffer tarot decks – ribbon loops to open the box, and ribbon hinges to hold the lid in place; magnetic fasteners to keep the box shut. The cards are laid out in a well with the guidebook on top. This box set is sturdy and made to withstand some heavy handling and travel.

This is a spectacular deck, it is both quirky and idiosyncratic. If you are a fan of Jasmine Becket–Griffith's art then this is pretty much essential for your collection. If you are looking for something a little off the beaten path then you cannot go past the Beautiful Creatures Tarot.

I would not recommend this deck for beginners because it contains no traditional symbols or archetypes. However if you are an experienced reader looking for a delightfully eccentric deck – then look no further.

The artistic expertise of Jasmine Becket-Griffith is amazing in technique and whimsical flourish. The book is well organized and easy to understand in terms of meanings for each card and the fanciful narratives given. The cards are large, ľ inch wider than a standard tarot width, and for me a challenge to grasp and shuffle. There are intriguing and helpful spreads, and I tried all ten of those layouts. The final spread listed is particularly interesting, and I believe many will find it helpful for understanding their family of origin; it is the “Family Tree and Heredity” spread.

The understandable transposition of wands, cups, pentacles and swords are here given as fires, waters, earths and airs. Translate the Nymphs in this deck’s court cards into the Pages, or Knaves. The remaining dozen court cards are creatively presented with astrological symbolism—a wonderful way to connect tarot and zodiac within familiar sun sign figures. The baby doll pout on nearly every big eyed female is nuanced with a few variations across the deck; a dispossessed pout, an angry pout, a traumatized pout, a drug dazed pout, an innocent pout…and so on.

The author, J. R. Rivera, artfully spins stories to help clarify each version of every card in this femme-centric deck. It is no small task, and I do wonder if the Beautiful Creatures Tarot is perhaps a better match for young girls than for mature adults. Here we discover that cards purported to represent Kings are but additional queens (female figures) and the two token appearances of males, in Lovers and Two of Waters, are a bit problematic. Why would either one gender be usurped from its rightful place of power and beauty? If the tarot is a grand journey of life’s vital metaphors, then leaving men in the dust would seem to indicate a serious imbalance in the basic approach to an understanding of the dance of life in mortal incarnation.

As a therapist and counselor, I know that which is omitted is telling indeed; and the other deck I have with the same artist’s work is Les Vampires Oracle which has only two appearances of the male form. Those appear to be the pale dead corpse of Jesus (the Compassion card) and a brother’s portrait (in the Immortal card). Sigh…to each, their own, they say, and I would not lower the rating of a nicely constructed book and deck due to differences of opinion. However, someone must point out that the Emperor’s coat is indeed rather transparent. What happened to the elephant in the middle of the room?!