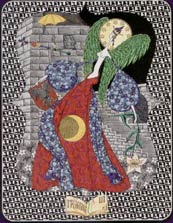 Le Tarot de Belmont is a rather dream-like fantasy tarot deck of 22 cards. The figures on the cards are unnaturally tall and thin, though the tarot symbology is recognisable. The cards also have thick checkered black and white borders, which add to the effect of peering through at another world. 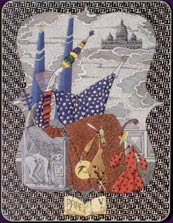 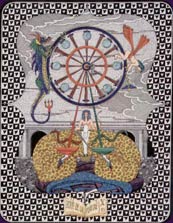 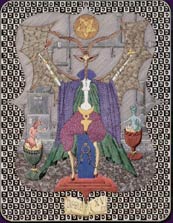 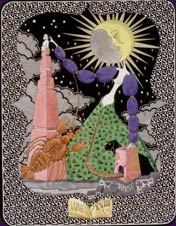 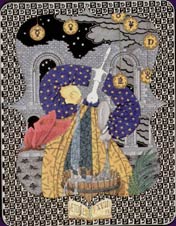 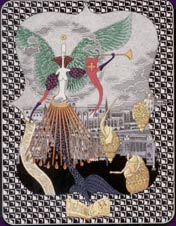 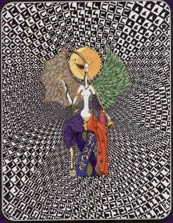 The first time I saw it, I fell in love with the artistic style of Francoise Corboz, a fantastic, contemporary Swiss artist, whose signature style is creating figures that are unusually tall and skinny, somewhat similar to those of Edward Gorey. As a result, I jumped at a chance to own a Tarot deck designed by this artist - Le Tarot de Belmont. This deck is a 22-card, Majors only deck that will bring a smile to anyone's face as they look at the eccentric and colorful figures in these cards. What is unfortunate is that there is precious little information available on it or its creator.

The coloration of the deck reminds me of black and white pen and ink illustrations that have been strikingly colored with jewel tones of primarily green, gold, red and blue. The artwork is crisp and clean and pleasing to look at. Each card is bordered with a graphic "checkerboard" that is made up of complimentary images of the Hebrew letter that is associated with each of the cards - more about that later.

Physically, the deck is amazing. The cards are larger than a standard sized Tarot deck, as they are approximately 4 inches wide by 5 inches tall. The card stock is very flexible and the cards are extremely easy to shuffle. The printing method has left the slightest feel of texture on the card, almost giving the impression that you are holding an original, handmade print in your hand. They fan and handle beautifully. The back of the cards are not reversible and depict a collage of parts of all the cards combined into a single figure in the center of the card. Swirls of contrasting black and white images of the Hebrew letters radiate from behind the figure out to the edges of the card back.

This deck follows the traditional Majors-only deck model with 22 cards, starting with Bateleur (Magician) numbered as I and ending with Monde (World) numbered as XXI. Mat (Fool) is not numbered. Force (Strength) is numbered XI and Justice is numbered VIII. The card titles are all in French. Each card is assigned a Hebrew letter in line with Jewish Kabbalah:


While this deck appears to be very flamboyant, that is just at first glance. This deck has great depth. The inclusion of the Hebrew letters of Jewish Kabbalah on the cards has the effect of adding an oracle to a reading with these cards. If that weren't enough, there is so much detail in every card, every time I use them, I am surprised by a new element that I had not noticed before. Each card features at least one key figure and several include more than one interacting with each other, and is rich in symbolism. The illustrations seem to follow the Waite Smith tradition - with lots of artistic license! The majority of my experience with Tarot has been with the Waite Smith deck and I had no problems reading with this deck. There are a few seemingly subtle changes, that await discovery within the illustrations, such as the lightning that is shown hitting the Tower in a typical Tower card is coming OUT of the tower in this deck's Tower card. At the base of The Tower, feet protrude from the bottom as if there were many people inside. I thought this was profound! Imagine, being inside this Tower and generating a lightning bolt to fling yourself out of The Tower and into a new world!

When I purchased this deck in 2006, it had already been out of print for several years. My deck has its box, and the date on the box shows 1995. It also included an extra card with a short summary of the artist's biography and introduction to the cards. I have since discovered that some of the decks came with signed posters, too. The decks did not come with a little white book (LWB), so it is fortunate that the imagery is somewhat keyed to a more familiar Tarot tradition. However, this is also a great deck to use intuitively! I have used this deck for many, many readings and never been disappointed.

This is one of my favorite decks. I can't help but smile when I see the comical, yet profound works of art on each card. If you get the chance to own one., take it! It will be worth it.