The Black Tarot is a dark gothic fantasy deck by comic book artist Luis Royo. It is meant to be used for exploring the darker side of the psyche. Now also available in a fully-illustrated version as the Royo Dark Tarot.


Card Images from the Black Tarot 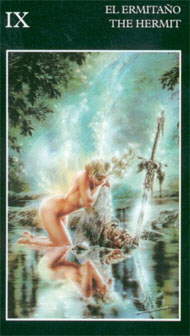 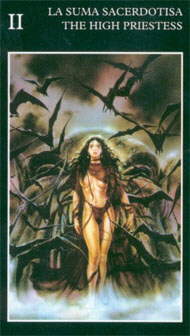 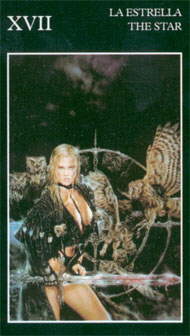 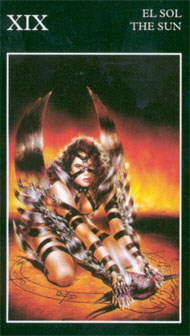 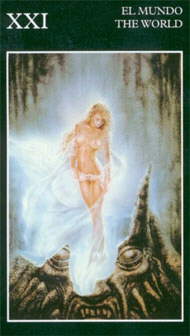 First off, I must start this review with one small disappointment, the pip cards, twos to tens. The pips are not elaborately illustrated, and are nothing more than than many of that suit. While the swords look like they could cleave heads, the wands look like the legs of a kitchen chair. The traditional cups are, in this deck, to as chalices, and are acually pictured as bowls with water rising from them like flame. Despite the simplicity, I do find this interesting as it seems to combine fire and water, representing the more stormy side of the emotions. The pentacle is a rock-carved skull that you'd expect to see in an ancient underground tomb from some Indiana Jones knock-off. On some pentacle cards (if it's a small number, thus allowing for the pentacles themselves to be larger), we see a women bearing herself in front of said skull, representing a pride in the beauty of the human body.

At least, the little booklet that comes with the deck offers some poetic interpretations. Examples are "Nine of Swords: Tears. The embarassment of . Empty thoughts." "Six of Pentacles: Generosity, goodness. The honey of the shadows. The nectar on the fruits of the skin. The juice of the apple.&quotl, and "Eight of Chalices: On the planet of the giants lost in a sea of words. In a sea where thoughts are only found in the depths."

Now onto the cards y'all really want to know about, the Court cards and Major Arcana illustrated by fantasy artist Luis Royo. The artwork on the cards you have not yet seen samples of is every bit as darkly beautiful as what you've seen in the already noted samples. Granted, the cards were smaller than I expected, but it an odd sort of way that makes me appreciate the intricate details all the more.

Early on in the booklet it says, "Do not get involved with this Tarot if you only want to know about the good things and guess about exterior and material events. The Black Tarot forms a symbolic group of the darkest side, so that the own 'self' and its demons emerge. the Beauty and the Beast [and it isn't talkin about the Disney movie] which we carry inside." Indeed the warning could not be more accurate. I have so far only done two readings (for others) with this deck. In one, doors were opened that the poor querent did not want to look at much less walk through (and yes, I gave her the booklet's warning first), and I picked up the cards and gave her another reading with a different deck. Some people just aren't ready to move on from denial yet.

The other reading went quite well. while I was using a full Celtic-cross spread, the most interesting part of the reading came from the Hierophant in position 8 (influence of family and friends). This Hierophant card shows a ghoulish vampire with huge wings standing behind a beautiful woman. Both with their left hands are concealing her genitalia. It turned out that he (the young querent) was very curious about sexuality, but his family wouldn't really talk with him about it, and would basically tell him it was bad and not to think about it. While his family I'm sure had the best and kindest of intentions, the feelings and impulses were not going to just go away and he seemed quite confused. Using the card symbolism, I as able to encourage him to find counsellors to talk with about it, and I let him jnow that there is always info available at the public library (but to be careful to find honest, reputable sources). I hope he pursues these avenues; as the card indicates, the beastliness is really in the cover-up.

My two favorite are The Fool and the Hanged Man. The Fool shows a batlike clawed humanoid coming up behind a beautiful young woman. He holds a mirrors in front of her. Despite the fact that its him looking into the mirror (and it is angled back towards him), it is the woman's face that appears in the mirror. The Hanged Man shows a muscular ghoul lying down in a sewer, arms at his side. A minimully clothed woman appear to be "riding"" him, and his face at first seems in ecstasy. Upon closer inspection, she's too far in the foreground and his sitting on his solar plexus, and his facial expression is one of agony as if his arms are for some reason paralyzed and he cannot reach out to embrace her. I find this very symbolic of greatly wanting something and yet knowing you just can't have it.

Overall, this is a most interesting deck. Despite the obvious sexism of the artwork, I recommend this deck only for those who are serious about Tarot. Any Tarot book will tell you that tarot is a tool that must be used well and this deck is no exception.

Overall, I highly recommend this deck and give 4 out of 5 stars.