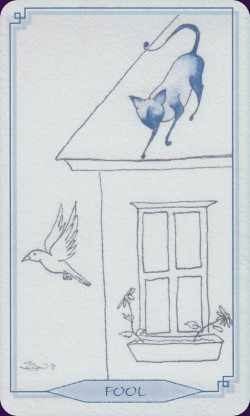 The Bleu Cat Tarot has 78 cards with slightly abstract images of a playful and anthropomorphic Siamese cat, illustrated in blue. From Beth Seilonen, artist of the Dream Raven Tarot and Tarot of Leaves, and inspired by observations of her own Siamese cat. 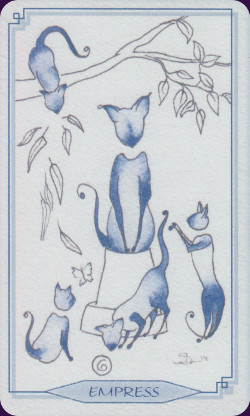 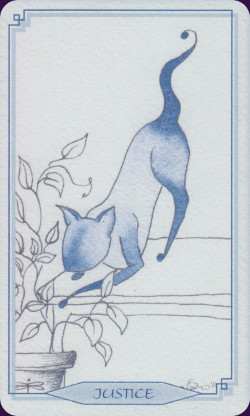 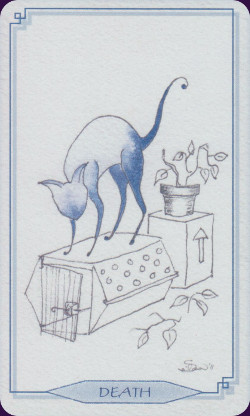 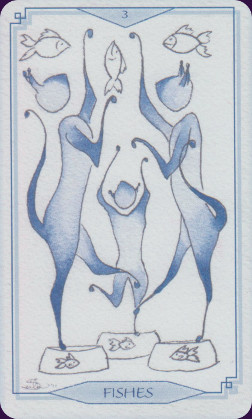 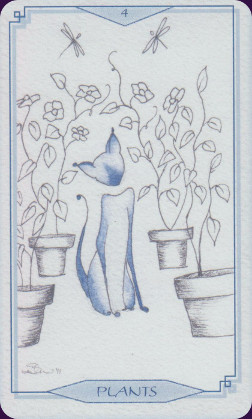 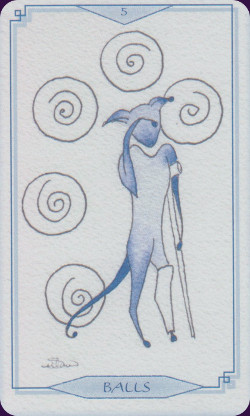 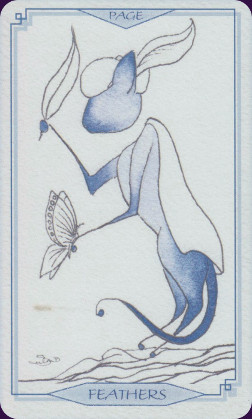 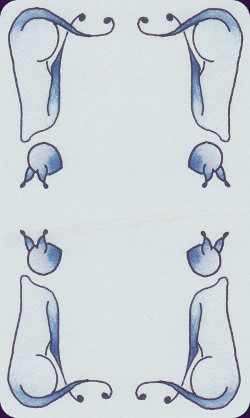 In the past few years Cat-art tarot decks have been extremely popular: given cat’s distinctive personalities and mannerisms and their ability to charm this is hardly surprising. Into this elite group of tarot decks comes the Bleu Cat Tarot. The images in this deck are inspired by the antics of the artist's own Siamese cat Isis. She captures the sinuous elegance and attitude of royal command that cat lovers will be familiar with, as well as their occasional genuine puzzlement at the strange ways of humans. And speaking of humans, they don't appear at all in this deck. The only evidence of human existence is that they provide the luxuries, necessities, and annoyances that appear as props and hindrances to a cat’s existence – food bowls, the dreaded house plant, toys, tables and desks, and cat carriers.

In this feline world, cats face the same quandaries that humans do – decisions, choices, challenges, and change. The only difference is that they are motivated by mildly differing forces – plants, birds, fish, balls… dogs.

This is a 78 card tarot; 22 Major Arcana and 56 Minor Arcana. The Major Arcana has no renamed cards; the Minor Arcana has been renamed to accommodate the interests of cats . Consequently Swords have become Feathers, Wands are now Plants, Cups suitably enough are Fishes, and Pentacles are now Balls.

The Major Arcana sticks fairly closely to the Rider Waite Smith standard, fitting the felines into a familiar framework. There are however a few clever departures – 'Death' shows a cat perched atop a cat carrier, packing boxes nearby – there will be drastic changes here for certain. 'Hanged' shows kitty dangling her toy mouse and reflecting on whether to keep or discard it; 'The Fool' shows our cat on a rooftop, about to leap in pursuit of a bird.

The Minor Arcana artwork too has both familiar structures as well as a wholly original interpretations. The divinatory meanings likewise veer between stock standards and some unusual (but not outrageous) departures from regular interpretations, especially in the suit of Feathers/Swords.

This is a three colour deck – fine black line work on a creamy background, with highlights in French-blue ink. The artwork itself is quite minimalist, simple yet complete images. The cards measure 73 x 120 mm, which falls into the 'normal' size range for tarot cards. They are printed on lightweight card stock that is not flexible. The front of the cards are matt and very lightly textured, and the back is smooth but not slippery. These cards handle and shuffle well.The design on the back, a framework of four cats, is fully reversible.

The Bleu Cat Tarot is beautifully presented, so typical of Schiffer Books tarot decks. It comes in a solid–cardboard box with a high gloss finish. It pulls open with a blue satin ribbon loop and is held shut with (hidden) magnetic clasps. Satin ribbon 'hinges' keeps the lid from flopping open. This little box contains both the cards and guidebook; it is designed to slip easily into a shoulder bag or backpack. This box set is made to travel.

The little white book, or in this case the little blue book has been written by the artist. It contains an introduction in which the artist describes the origins of this deck, it then moves through the Major Arcana, Minor Arcana, Spreads, and Conclusion. There is a description of the scene on each card as seen through a cat's perceptions of the world. The interpretations are essentially standard with an ever so slightly feline twist. There are no reversed interpretations given for this deck; the artist suggests that reversed cards can be seen as an opposite or lessening of the positive qualities of the card. The two four-card spreads included have been designed especially for the Bleu Cat Tarot - ‘Looking Out My Window’, a solution oriented spread; and ‘Serving Reality’ - a self-awareness spread.

This is one of those tarot decks that has abandoned the rulebook and created a new deck with great success. It is however not a beginner's deck. The Bleu Cat Tarot is a deck that you will have to learn rather than impose standard interpretations upon. For an experienced reader this will not be difficult as it is not an overly complex deck.

The Bleu Cat Tarot is highly idiosyncratic, light-hearted, guileless, gently humorous, and utterly charming. If you are looking for something a little bit different in a tarot deck this is wonderful choice. And if you love cat tarots then this is an absolute must for your collection.

The Bleu Cat Tarot is artistic, whimsical and expressive, and yet offers solid tarot advice in the interpretations given. It is a deck of 78 cards with well-known tarot correspondences, that is, 22 major arcana in recognizable sequence and minor arcana in four suits adjusted for the world of the Siamese or bleu cat. Each suit carries the four court cards and ten numbered cards.

The box measures 3 Ľ” wide by 5 Ľ” tall by 2” deep. As with her other decks published by Schiffer, handy ribbons flank the wide opening to keep the box lid from falling backwards and, over time, pulling the lid by weight from the box bottom. Another ribbon juts out from the center of the wide lid dimension, like extended tongue, to offer a pull tab for opening the box.

The 78 cards together stack about Ľ inch higher than my Pamela Coleman Smith deck; measuring 1 Ľ” or 3.2 cm thick. Individual cards are 2 7/8” x 4 3/4” (7.3 cm x 12 cm) with rounded corners. The cards are thick enough to give confidence in their lasting well and resisting being bent.

Graphically, the main theme is of course that bleu cat, displayed in varied positions and with the any of four suits, which are plants, fishes, balls and feathers. Plants equal wands, fishes are taken from cups, balls replace pentacles and feathers act as swords. Each and every card has a reversible image for the hidden side; in this case, there are four identical blue cats positioned in each corner. The color scheme has tonal variations of blue and gray.

Within the box is a small book, the same width and height as the cards, and its 96 pages provide an Introduction, note about Reversals, pages on each card of the Major Arcana, Minor Arcana and also offering two sample spreads. For interpretive information, each page has the card title, a miniature of the whole card in the upper right corner, and about four sentences that provide meaning for both the reader, and humorously, referring often to the querent as the cat. Upright meanings only are provided, adding to this set’s simplicity. Additional items depicted are of course the suit symbols with delightful graphic representations of the cat’s world—including for example, food bowls, additional cats, and hovering butterflies or dragonflies. Cats are depicted doing catlike actions and also in poses that are anthropomorphically human.

In some ways this deck could be considered sparse and simple, yet the written interpretations are by and large carefully and wisely crafted, evidencing good understanding of the basic messages of each card for the reflective metaphor contained therein. The illustrations are delightfully delicate watercolors and no doubt will enchant the cat lover in each of us. Part whimsy, and part wisdom, the Bleu Cat Tarot can serve well when humor and Zen simplicity are desired. It appears as welcome break from other decks with saturated color and more busy or intense scenes.