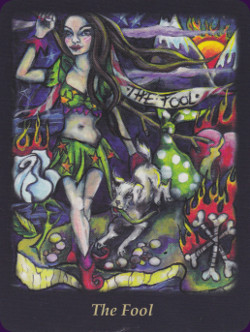 The quirky, vintage tattoo-inspired Bonefire Tarot has been re-printed in a mass-market edition from Schiffer Books. The 78 bright, almost psychedelic cards are heavily inspired by old school American tattoo design as well as tarot symbolism.


Card Images from the Bonefire Tarot 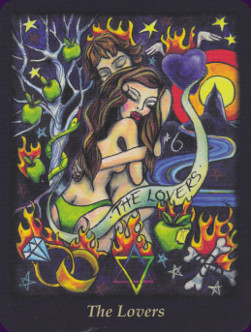 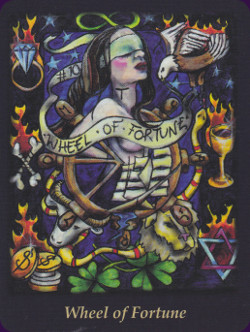 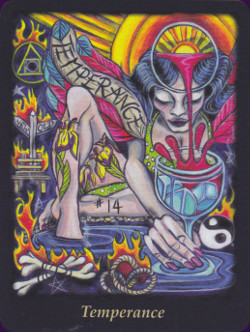 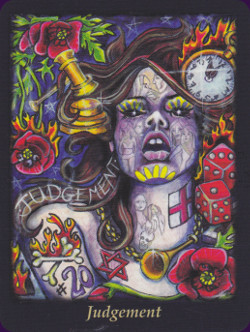 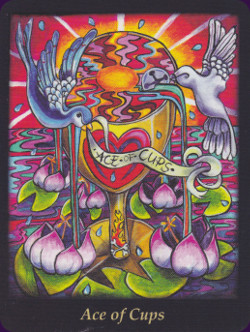 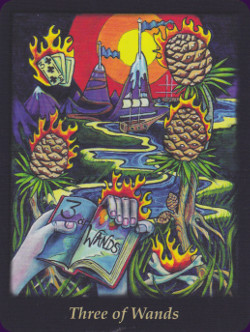 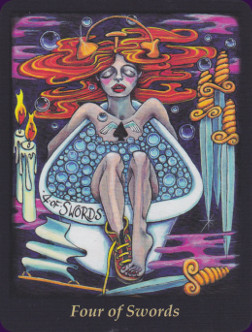 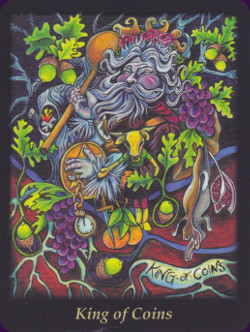 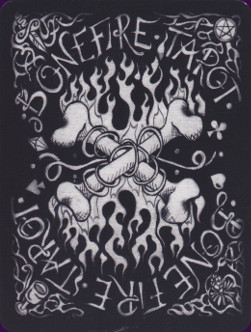 While tattoos may be appreciated for their artwork alone, many feature images that are deeply symbolic for their wearer. This is why tattoos and tattoo flash has such great potential for tarot cards – it offers the Seeker layers of symbolism which functions on both a personal and universal level.

Before embarking on designing the Bonefire tarot, artist Gabi Angus-West was a relative newcomer to tarot, but an experienced artist and tattoo flash designer. Never fear, Gabi did her due diligence and found plenty of ways to incorporate tarot and tattoo symbolism into her super-cool deck. This tarot was designed with a certain demographic in mind – 'young and concerned with aesthetic beauty’, people who tend to express their beliefs and lifestyle choices through skin art. However, given that it is heavily influenced by the classic Rider Waite Smith deck and often references its images, the Bonefire Tarot is highly functional (as opposed to being cosmetic and decorative).

By the way, the name Bonefire is the root word of our familiar term bonfire, and in this case refers to Beltane fires and the celebration of love and passions.

This is a 78 card tarot, with 22 Major Arcana and 56 Minor Arcana. The Major Arcana follows A. E. Waite’s order and naming of the cards; the suits of the Minor Arcana are Wands, Swords, Cups, and Coins. Each suit consists of 10 number cards and 4 Court cards – Page, Knight, Queen, and King.

The cards measure 90 x 117 mm, which makes them broader and almost square in shape compared to many commercial tarot decks currently in print. They do however sit nicely in the hands and their smooth, shiny finish makes them extremely easy to handle. The card stock is very high quality, being light but solid, relatively flexible without being flimsy, and well sealed and finished.

The print quality is superb and captures the dazzling colours and delightful details of the Bonefire deck. The images are clear and crisp, with no blurring, no colour bleeds, and no misprints. Gabi Angus-West’s palete is broad and embraces vivid and magical colour schemes. There is no attempt at realistic depictions - in the world of Bonefire anything is possible. Mountains are purple, the sky is pink and blue, the sun is lemon yellow, and everything between is brilliant, often fluorescent, sometimes gorgeously lurid.

Sailor Jerry Collins is the tattooist who is cited as the primary artistic influence on the artwork of the Bonefire Tarot. Sailor Jerry developed a style now known as Classic or Old School American, which is instantly recognisable by its iconic imagery (think pinup girls, daggers, dragons, tigers, eagles, nautical stars, swallows, skulls and crossbones etc.) and bold line work.

While the artist has been influenced and inspired by traditional tattoo design, these images are entirely her own. Yes, there are winged hearts, skulls and crossbones, spider webs, and bloody daggers, but there is also a broad spectrum of traditional tarot symbolism as well as Jungian archetypes, and some of the artist’s well thought out, personal symbolism. In fact, the guidebook has a 4 page appendix detailing the vast array of symbols employed in this deck, and explaining the concepts they represent.

It would be easy to dismiss the artist's style as somewhat populist and commercial, but that is to ignore the influence of naive art as well as her own highly idiosyncratic style. The deck is populated by a variety of characters inhabiting a near psychedelic fantasyland where modern life fuses seamlessly into mediaeval-hippydom. Angus-West veers between delicate shading and bright blocking of colours. And judging by the texture marks reproduced on the images, the artwork appears to be acrylic paint on canvas.

Each image melts into a pitch-black border, with the title given underneath the illustration in a fawn coloured, plain font. The image on the back – a black and white skull and cross bones with the words Bonefire Tarot mirrored at the top and bottom – is fully reversible.

The cards come packaged in Schiffer Publishing’s signature high-class presentation – a solid cardboard box with fold back lid, magnetic clasps to keep the box shut, a small, ribbon loop to facilitate opening the box, and ribbon hinges to hold the lid in place. The cover design features faux hessian and brown paper printed with the Bonefire signature design and featuring information about the deck itself. This box set is solid and sturdy. While it is not exactly compact, it will withstand the rigours of travel, and is not too bulky to be stashed in a backpack.

The 192 page guidebook is written by the Bonefire artist – Gabi Angus-West, and is every bit as quirky as the deck. Angus-West has a forthright and chatty style which is very engaging for the reader, and one gets the feeling that she can be relied upon to give the Seeker solid information.

The Preface encompasses a Warm Welcome which details the genesis of the deck, including discussion of the extensive use of tattoos and tattoo symbolism throughout the illustrations. Angus-West is refreshingly proud of her work. She addresses ways in which the Seeker may maximise their relationship with this deck in order to get the best out of it. This includes the understanding that the deck has a personality and voice all its own.

Chapter 1 introduces the Seeker to the Major Arcana. Each card is discussed at length, the symbolism is clearly delineated, and the many and varied influences and pop cultural references are revealed here. We are also privy to the emotions, intentions, and aspirations of the players in each image.

The divinatory meanings are given for upright cards only, and do not stray significantly from commonly accepted interpretations. The advice given is positive in outlook and tends to make the most of any bad situation. The Seeker is often asked one or more questions which are intended to stimulate self-reflection. Just be aware that Gabi Angus-West tends to call a spade a spade, and if you are looking for a delicate and esoteric approach to tarot you will be in for a surprise. There is a full colour reproduction of each card. At the start of each card entry is a series of keywords and concepts, and at the close the pertinent symbols in each image are listed.

Chapter 2 introduces the Seeker to the Minor Arcana. The cards are discussed and analysed in their suits. Again, each card is reproduced in full colour, and each has a series of keywords as well as a discussion of the symbols and meanings embodied in each image. The divinatory meaning given is for upright cards only.

Chapter 3 deals with reading the cards. The author gives some decent and commonsense advice about familiarising yourself with your deck and building a relationship with it. Included here are three layouts – Wooden-Eye’s One Card Wonder, which I'm sure you will have divined is a 1-card draw. The Beltane Three Card Spread aims to uncover seasonal energies; and the Bonefire Eight Card Enlightener is a variation on the Celtic Cross which aims to illuminate an issue and suggest further actions the seeker could take.

Chapter 4 discusses other applications for this deck, notably in the working of magic. It also includes a Glossary Of Bonefire Symbols, and a short list of further reading.

The Bonefire Tarot has been something of a cult classic - being available to order from the artist’s website and as an app… so it's great news that it is now commercially available from progressive tarot specialists, Schiffer Publishing.