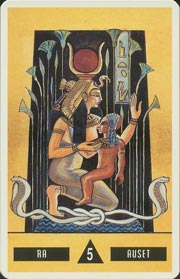 The Book of Doors Divination Deck is a 65 card oracle deck, based on the symbols and deities of Ancient Egypt.


Card Images from the Book of Doors Divination Deck 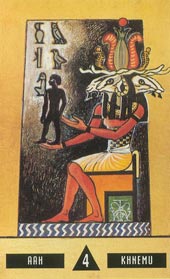 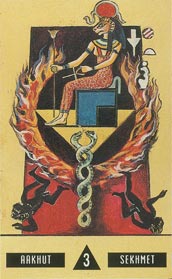 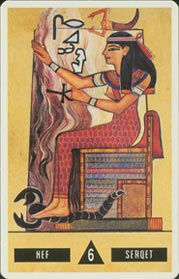 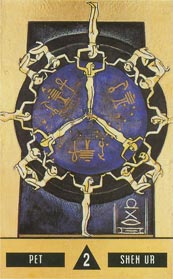 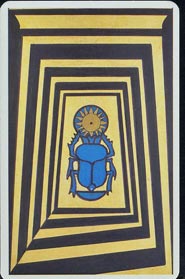 "The Book Of Doors" is based on the concepts of the universal language of the symbols of Egypt, and on the archetypal nature of Egyptian deities. Two occult keys comprise the magical system behind this deck: the alchemical text known as the Emerald Tablet of Hermes Trismegistus (which describes the transmutation of primal elements to pure gold), and the numerical system of Pythagorus (specifically the magic square that provides the basis of the numbering for the Neteru).

Within this magical square the eight families of the Neteru are arranged according to element (which defines their function) and by the evolution of the Mysteries in the major religious centers of Heliopolis, Memphis and Thebes.

This is a system meant to be used with great care - with emphasis on the sacred when working with divination, meditation, and magical invocation and evocation. It is meant to act as a doorway to the voices of ancient Egypt, much as Tarot acts as a doorway to the archetypes that it represents. The Neteru as presented here represent their evolution over the ages - some merging with others, some fading away, some coming to the forefront of their time.

The eight families of the Neteru are based on the four elements and the principles of alchemy. As represented by the Emerald Tablet, they are as follows:

1. Tepi-Aui-Un: The Family of the Eight Primordials


3. Aakhut: The Family of Fire


The "Book Of Doors" consists of 65 cards - the eight cards of the eight families, and a final card called the Neter of Neteru, which has no number and belongs to no family. It represents the All, the Absolute.

At 2 3/4" by 4 1/4", the deck is slightly smaller than the regular size Tarot deck, and is a very nice size for those of us with small hands. The card stock is stiff and glossy, but not coated, and will take care to keep in good condition.

The backs of the cards have a 1/4" white border, followed by a labyrinth like series of gold lines that surround a blue scarab on a gold background. The face of the cards has a 1/4" white border, followed by a 1/2" gold border. The family name, number, and function title are presented at the bottom of the card in white on a black background. The pictures themselves are combinations of Egyptian hieroglyphics and symbology.

The authors go into great depth to explain the Egyptian system of deities, the Pythagorian theory of numbers, and the alchemical meanings behind the numbers. Quite frankly - they go into a bit too much depth, sometimes with little backing. I also know more than I thought that I wanted to know about Egyptian hieroglyphics and their pronunciation! Having said that - when I went to do readings with the deck, I found the results fascinating - and accurate.

There are two methods presented for setting up a reading with this deck: the first method involves using the eight sides die provided with the deck. The die is rolled twice - once to obtain the column in the Pythagorian square where the Neter will be found, and a second roll to determine the number of the row, or family, that the Neter belongs to. The second method is to shuffle the deck and draw the cards in a manner similar to drawing cards for a Tarot reading.

The spread that was presented by the authors is the ten card Tetractys Spread. It is presented in the form of a pyramid, with the following position definitions:


1. Sirius, the Sun beyond the sun, the archetype shaping of all matter, the cause of the situation.

2. Shows how past thought patterns and actions affect the present.

3. The inner energy that we carry for transformation - this is a guide for our future actions.

4. This represents sexual energy, and the point of contact between the Seeker's inner and outer worlds.

5. This is the connection between our physical and spiritual lives, and speaks of the type of emotional and social relationships that the Seeker will have.

6. This represents the flowing of our emotions, expectations and wishes.

7. This card relates to past actions and how they are currently influencing us.

8. This card shows how the Seeker will act in given circumstances.

9. This card speaks of our power to manifest - to do things.

10. This card speaks of what actions we can perform to accomplish our goals.

Each card is presented with a black and white scan of the card, a discussion of the energies held within and a divinatory meaning (there are no reversed meaning given). From the book:

The Family Of The Eight Primordials: Number 8 - Kerhet Secret

Kerhet is standing int he primordial water, with the two-headed snake of Kerh now out of the mud and in the light. The power is thus being manifested as the seed is emitted into the world; the transmission has been given. In the mark of an adept, she holds her finger to her lips.

In Kerhet the quality of secrecy is recognized int he oath to Keep Silent, to keep the creative operation in perfect secrecy. Kerh and Kerhet are the Neteru to whom we have to call for the secret initiation as there are no intermediaries. These initiations lead to an accelerated spiritual metamorphosis, and can give information in the dream state to the higher bodies, to the ba and ka. This is the initiation which permits us to transform our destiny.

Kerhet is number eight, meaning resurrection. The final sound he in her name describes the bringing forth of light. With love Kerhet distills the energy from the dense matter of the physical , to take control of the subtle bodies and the many dimensions of existence. She is the only female primordial with a frog head, showing the dominion over the earth element we must achieve before the "leap" into the spirit.

Kerh and Kerhet show how to use the power most effectively, that is with great secrecy. Every useless exhibition of this power linked with the ego, every use not strictly necessary for the spiritual work, is severely punished by losing the power, and in extreme cases, by losing the life.

The silence of Kerhet relates to the Saturnine influence within all of the Primordials. It holds the secret of the formation and aggregation of matter, the seeds of existence and karma. And so Kerhet concludes the powerful, the awe-ful, the magical ogdoad.

This is definitely not an oracle for beginners, or for those that have no interest in Egypt and Egyptian symbology. For those with an interest in things Egyptian, who are willing to do the work required to understand this deck, the "Book Of Doors" is exactly that - a book containing the doors that open to ancient Egyptian archetypes and archetypal wisdom.